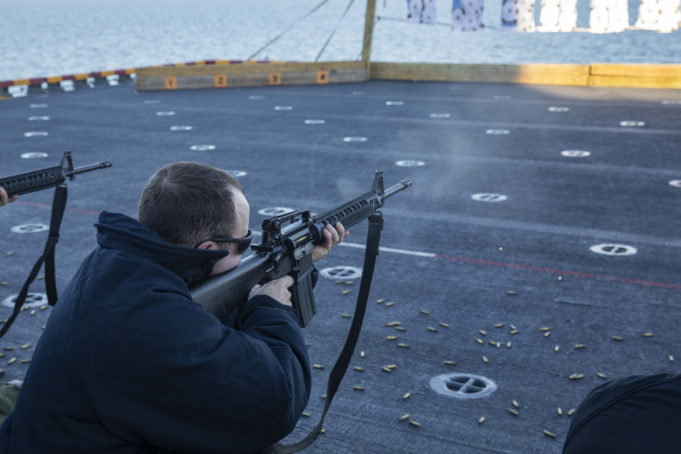 Last week, Senator Tim Kaine (D-VA) introduced legislation in the U.S. Senate that would ban high-capacity magazines – those holding more than ten rounds of ammunition. The “Keep Americans Safe Act,” which is carried in tandem with Senator Bob Menendez (D-NY), would ban the importation, sale, manufacture, transfer, or possession of such gun magazines.

“These high-capacity magazines are designed for shooting en masse and have been used in some of the country’s deadliest mass shootings,” both senators explained, following the one-year anniversary of the mass shooting at Stoneman Marjory Douglas High School in Broward County, Florida.

“Commonsense gun reform can prevent families’ worst nightmares from becoming reality,” Kaine said in a press release. “In this new Congress, I hope my colleagues join me in taking action to ensure high-capacity magazines do not enter our schools, offices, places of worship, and concert halls.”

The bill would alter the high-capacity definition to prevent “coupled or joined magazines,” require devices manufactured after the enactment date of the law to have “conspicuous” serial numbers, and would enforce a listing of the date of manufacture on a magazine to assist law enforcement officials in identifying restricted magazines.

Limited exceptions are provided under the bill for high-capacity magazines possessed, which are “certain current and former law enforcement personnel, certain Atomic Energy personnel and purpose, for tubular devices that can only accept .22 rimfire ammunition, and for certain authorized testing or experimentation.”

Currently, the Federal Bureau of Investigation (FBI) and the Bureau of Alcohol, Tobacco, Firearms, and Explosives (ATF) can seize and destroy certain firearms but not high-capacity magazines, but the bill would make forfeiture provisions concurrent for such gun magazines.

The development comes as courts nationwide are issuing an unprecedented number of orders to seize firearms from gun owners deemed to be mentally ill or after threatening others. Known as “Red Flag” laws, such measures allow the confiscation of firearms without due process.

According to a report from Fox News, nine states have passed laws over the past year allowing police or household members to seek court orders requiring people deemed threatening to temporarily surrender their guns, bringing the total to 14.