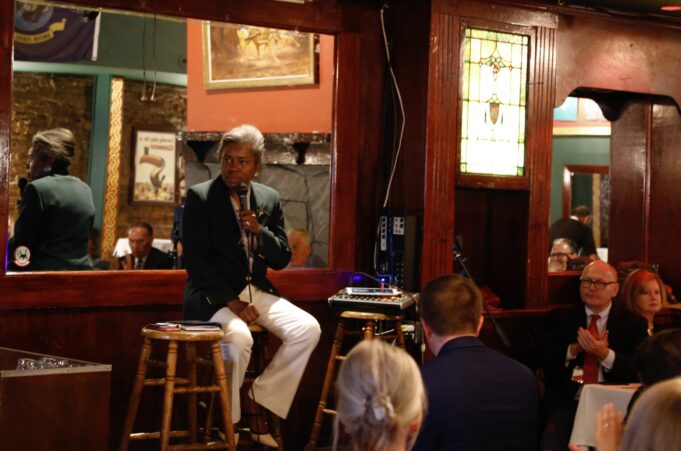 Northern Virginia Republicans packed the house at Murphy’s Irish Pub in Alexandria, eager to hear from LtG. Earle-Sears about her work during the first few months of the Youngkin administration.

Earle-Sears – a long-time veteran of Virginia’s grassroots political circles – also offered advice to the attendees on how to spread the Republican message. She said to treat the party as a business, and to make sure that party leaders and activists weren’t limiting their customer base – instead actively looking to grow it.

Arlington GOP Chair Lori Urban said during the event that the tickets sold out fast – and had been sold out for three weeks prior to the event date – a testament to the renewed energy felt by Republicans in Northern Virginia.

After last November’s election, Republicans statewide have a lot to celebrate, as the party now controls four of five elements of state government. Republicans control the state executive offices of the Governor, Lieutenant Governor, and Attorney General. The Virginia House of Delegates is also controlled by Republicans and a re-energized party base will look to take back the state senate next year, in 2023.

Absolutely love the kind of principled conservative leadership we elected in Virginia last year. @WinsomeSears is an American success story, and I was proud to support her through the #VAGov convention last year. She’s doing big things in Richmond! pic.twitter.com/XtDw2APXR3

The 8th District’s Republican nominee will be chosen by pre-registered party delegates who fill out a single “ranked-choice” ballot. The results will then be tallied up and a winner’s name shall be announced at some point on Saturday afternoon.

On the Democrat’s side, incumbent Congressman Don Beyer is being challenged by Victoria Virasingh in their party’s primary election that will be held on June 21st.

Virginia’s unique electoral politics will be on display this weekend across the state as Republican nominees will be chosen in not only the 8th district but also the 10th and the 5th.

There are eleven candidates vying for the 10th district nomination for a chance to take on incumbent Jennifer Wexton.

Freshman incumbent Congressman Bob Good from the 5th District is expected to win his nominating contest on Saturday as well.

On June 21st, Republicans will nominate their picks to challenge Elaine Luria in the 2nd District and Abigail Spanberger in the 7th District.