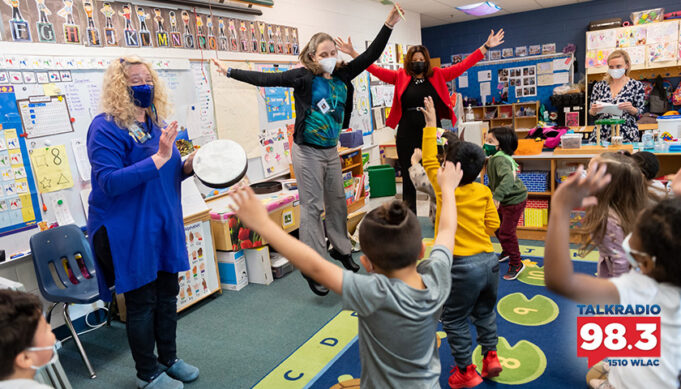 Live from Music Row, Monday morning on The Tennessee Star Report with Michael Patrick Leahy – broadcast on Nashville’s Talk Radio 98.3 and 1510 WLAC weekdays from 5:00 a.m. to 8:00 a.m. – host Leahy welcomed concerned parent, author, and member of the Independent Women’s Network, Stephanie Lundquist-Arora, to the newsmaker line to talk about how she is fighting the Woke culture of Fairfax County Virginia’s school board from the inside.

Leahy: We welcome to our newsmaker line right now, Stephanie Lundquist-Arora. She’s a Virginia mother, author of Coping with Gender Fluidity, and a member of the Independent Women’s Network. Stephanie, welcome. And it’s back-to-school time, isn’t it?

Lundquist-Arora: It sure is. Thanks a lot for having me.

Leahy: So what part of Virginia do you live in? Do you live in Loudoun County, where all the trouble went down, or Richmond?

Leahy: (Chuckles) Absolutely. What is the problem with all of the left-wing authoritarian school board members in Virginia? How did that happen?

Lundquist-Arora: Well, I’m not quite sure. I think it’s what’s going on everywhere across the country, as people don’t pay attention to local governments and then they go in and they just kind of vote whatever on the ballot. They don’t pay attention, they just check a name.

And we’ve had some really interesting people sneak through, including Abrar Omeish, who basically got up in June 2021 and announced that the high school seniors she was speaking in front of should remember their jihad when they enter the world of hate, during a graduation speech.

We have 12 members on the school board. She’s one of them. So their focus is definitely on political things and to the detriment of education, unfortunately.

Leahy: Are any of those 12 school board members sane or are they all bunch of lefties?

Lundquist-Arora: (Chuckles) I hope at the end of the day some of them are a little bit sane, but they’re not voting that way. They’re certainly not voting that way. Math scores have gone down 25 percent pre- and post-pandemic, and still their focus is on compelling speech by suspending fourth-graders for misgendering their peers or deadnaming. So it’s unfortunate what’s happening.

Leahy: Hold on. Misgendering their peers or – what was it you said? Deadnaming. What’s that?

Lundquist-Arora: Deadnaming. So basically, in the still of the night when the schools were closed in Fairfax County for a year and a half and students were virtual learning, I was actually home-schooling my children during this time and everybody was trying to get the schools back open. Get the kids back in school.

The school board, instead of talking about the mental health issues of students in isolation or getting students back into the classroom, were passing policies like compelling speech, a violation of the First Amendment.

They were passing policies that basically made it a suspendable infraction for children as young as, in this case 7th grade, during that time, to say, if somebody wants to be called “he” [and] to say “she” instead, that’s misgendering. And also deadnaming, as if they’re trans, then they’re using the name  like if you call Caitlyn Jenner Bruce Jenner, that’s called deadnaming. So if anybody in school does that they can be suspended.

Leahy: I didn’t know that.

Leahy: This is insanity. It’s just insanity. Now, are you sending your kids back to K-12 public schools this fall?

Lundquist-Arora: I am. I’m fighting the fight from the inside. I think it would be less time-consuming to continue to home-school them, but my children are all very aware of what’s going on, and they’re getting quite an education in civics with regard to all of this.

I’m not sure if you knew this, but they were suspended for several days last year for not wearing their masks. So we’ve been kind of fighting the fight from the inside. And I think a lot of people across the country, not just in Fairfax County, have voted with their feet in these school districts.

They don’t like it. They get out of the schools, and then they don’t kind of do anything to change the schools anymore. Who can blame them, and who has time for it? But on the other hand, the problem with that is that we’re raising a generation of leftists at the expense of education, and these are the future citizens who are going to be making the decisions in our country.

Leahy: That’s all true, except in this case … now, look, my children were educated primarily in K-12 public schools, but they’re out, they’re long out of that, and they’re adults and in the workforce. How many kids do you have?

Leahy: And they’re all going back to K-12 public schools this fall.

Lundquist-Arora: They are. For now.

Leahy: To me, I think you, and other parents that are doing that, when they have alternatives are subjecting their children to this kind of nonstop propaganda and bullying that’s going to come from the left and the authority figures there – isn’t that a consideration that you have with your kids?

Lundquist-Arora: They are well accepted among their peers. My children, in particular, play multiple sports. They’re happy. I’m always concerned about their happiness index. So if I felt that that was the case, if I felt like they were being bullied by their peers, I would definitely change course.

Leahy: Hmm. Don’t you think, though, that this leftism is going to permeate their brains?

Lundquist-Arora: I think in the case of some kids, it is, but in the case of my sons, we’ve been fighting this, and they were among very few students who defied the school’s illegal kind of dress code order.

I’m not sure if you’re familiar with that. Governor Youngkin here passed the executive order during his first day in office, and Fairfax County actually circumvented it and said, oh, we don’t listen to the state law, so what we’re going to do instead is part of the dress code now. You have to wear a mask.

And my sons were like, we’re not doing that. We’re not wearing a mask anymore. They had problems with the mask, so they were among the very few. And I said, look, you don’t have to do this. It’s completely up to you.

And they were like, well, it’s the law. We want to do that. So they went to school multiple days. They got suspended, and I said, look, if you’re going to do this, I’m behind you 150 percent. But it was definitely their decision to do that.

Leahy: Stephanie, in-studio is Crom Carmichael, who has a question for you.

Carmichael: Stephanie, when you say they chose to do it, you mean they chose not to wear a mask?

Carmichael: Okay, well, then they got suspended, and then what happened? Because, by the way, the decision they made was based on thought and logic. And so I’m really interested in what was the outcome.

Lundquist-Arora: Thank you for saying that. Yes. And it was completely legal also, because they were covered by the executive order, too. Eventually, what happened is the circuit court judge put a stay on the executive order too. So they ended up temporarily having to put their mask back on.

Because of the suspensions, we filed a lawsuit. We were plaintiffs in the lawsuit against the school district for willfully violating the Executive Order Two.

And interestingly, the lawyers for the school board members, in their motion to dismiss, said, “Plaintiffs, as parents of their minor children, enjoy no codified rights to make decisions over their children’s health and education.”

Leahy: That’s what they argued?

Lundquist-Arora: And this was in the motion to dismiss. Yes, this is what they argued.

Listen to the interview here.