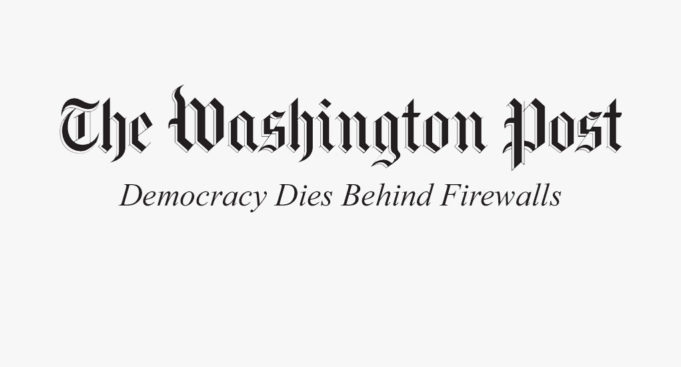 One no longer wonders why the press is held in such low esteem after reading the foregone conclusions of the Washington Post’s annual endorsement of Democrats.

As written today by TRS’ Shaun Kenney, “Lack of civility — or lack of objectivity — starts and stops with institutions who claim to be beacons of both yet trade upon them for influence and power.”

The Post attacks a statewide candidate for what it called “gutter politics,” which is fine for the always-positive scribes at the Post as they sit aloft their self-anointed mount of higher values than those who read them.

It took mere paragraphs for them to leap headlong into “gutter politics” in an endorsement for Lt. Governor that is 100% wholly negative.

The Washington Post endorsed extreme liberal Justin Fairfax without writing as much as a single issue that they agree with him on.

All they said was that Fairfax is an attorney.  Republican Jill Vogel is an attorney, too (Post left that out).  Other than that, they don’t say a single thing about Fairfax, other than he is “bright”.  Northam didn’t get called “bright”, so read into that what you will.

No, instead of telling us why we should vote for Fairfax, the Post spends the entire LG endorsement bashing Republican Jill Vogel.

I’ve never seen a newspaper criticize a candidate for tactics in one paragraph and then go directly into using the exact same tactics they decry.  The vicious attacks on Vogel took up 5 or 6 times the space as the tiny sentence about Fairfax.

Justin Fairfax is about as prominent in the Post’s editorial as he would be on a Northam-Herring flyer.

Clearly, like a child who completes a maze puzzle by starting at the end and working backwards, the Washington Post knows it will be endorsing Democrats, and works its way backwards to figure out why.

It would be nice if the Post didn’t change its logic within the same editorial.  It would save readers a lot of whiplash.

Oh, and the Attorney General endorsement was no profile in courage either.  The prime issue the Post settled upon?

Both Mark Herring and John Adams oppose segregation, by the way.  But the Post applauds when Herring brings up the red herring.

A few paragraphs earlier, the Washington Post attacked a candidate for “pandering to vile and racially inflammatory tendencies.”

When Mark Herring panders to vile and racially inflammatory tendencies, the Post endorses him and applauds.

Again, I don’t mind when the liberal Post endorses liberal candidates.  That’s what they do.  Is it too much to ask that even in their championing of liberalism they add a little bit of journalistic integrity and consistency in their rationales?