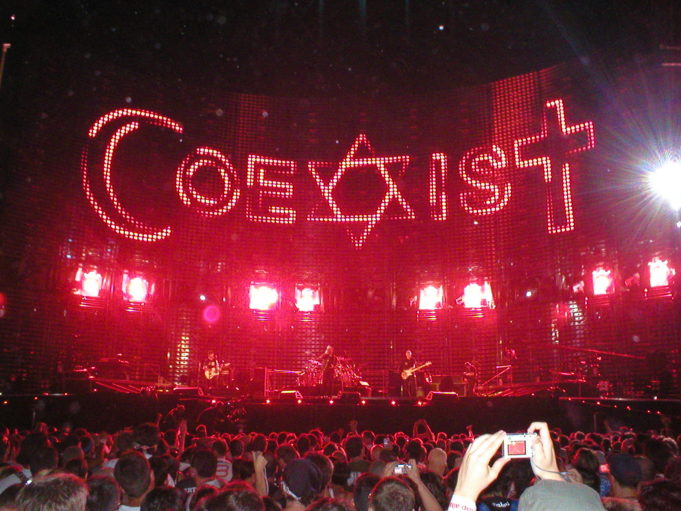 Tolerance has become the highest virtue in Western society. The dominant worldview of the day demands it. When the pre-eminent philosophy holds being true to one’s self as the telos (or final purpose) of our existence, it naturally follows that this can only happen socially if an atmosphere of toleration is established, imposed, or demanded.

Jewish philosopher David Heyd remarked that tolerance “has been hailed as one of the fundamental ethical and political values, and it still occupies a powerful position in contemporary legal and political rhetoric.”

To be “intolerant” is to commit the gravest social error, and will cause one to be excommunicated from the cathedrals of academia and politics.

But what ontologists know that existentialsts apparently don’t is (1) Toleration is not the same as Validation; and (2) One can distinguish between tolerance for ideas and tolerance for beings.

If we are commanded to be tolerant, we had better be sure what it means. Oxford’s modern definition reads “the disposition to be patient with or indulgent to the opinions or practices of others; freedom from bigotry or undue severity in judging the conduct of others.” Its original definition, which is still appropriate, is “The action or practice of enduring or sustaining pain or hardship; the power or capacity of enduring.”

The modern definition and original definition are very much linked – they both imply bearing, a carrying, or a forbearance. The word itself goes back to the Latin verb fero/ferre/tuli/latus, which is “to bear or carry.” Specifically it is derived from the perfect tense (tuli) – which is to imply a completed act – i.e., “I did carry,” in the infinitive tolerare = “to endure,” and its participle toleratum = “an enduring.”

It is closely related to dozens of other words through its root’s other tenses (ferre/latus), including words like “offering” (to carry a gift toward), “suffer” (to endure pressure from above), “superlative” (to carry to the highest degree), and “relate” (to carry or bring back). The etymograph below shows the mapping of this word. What we see in common throughout the relationships is the idea of carrying, of enduring. 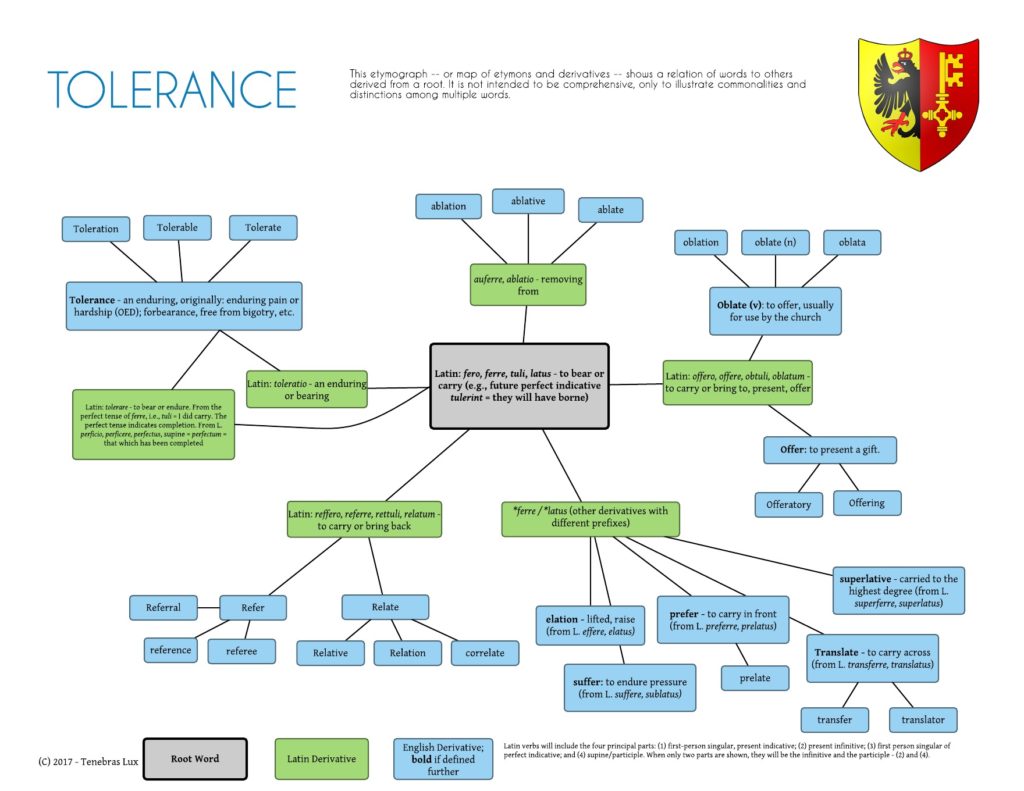 Before moving on, I will only note that there is a fallacy in logic called the fallacy of etymology. I don’t mean to commit that here, or imply that because a word meant something different at one point in time it must mean that same thing now. Etymology is not useless, however. It gives us a family portrait, as it were, enabling us to identify commonalities as well as distinctions in the etymons and derivatives. If we could speak ontologically about words, etymology allows us to draw nearer to a words essence, much like the study of DNA allows us to draw nearer to biological essence – that is, the property (or properties) without which Thing A would cease to be Thing A.

What these commonalities mean – at least etymologically – is that enduring a thing, or allowing a thing to exist, or withholding judgment and bigotry from a thing, is essential to the idea of tolerance.

What tolerance in no way implies is an expression of the value of the thing being carried or endured. That idea of value is foreign to the word tolerance in and by itself. In other words, toleration does not equal validation.

But when we are asked to tolerate the concept of homosexual marriage or new transgender pronouns, we’re not being asked just to endure their subjective existence, we’re being compelled to validate those things to the point of state enforcement.

We see this also in modern religious discussions. Christians are increasingly asked to affirm a stance of religious pluralism – that there can be more than one true religion – and deny the “arrogant” claims to exclusivity for salvation. This is done in the name of “religious toleration”.

But again, to tolerate a different religion is not the same as affirming that religion’s validity. Christian’s can’t logically validate another religion (without ripping pages out of scripture) because to do so would make that religion’s view on final purpose (or “salvation” or “heaven” or “Nirvana” or “Valhalla”) efficacious. But Christianity rests on the divinity of Christ who explicitly claimed his own exclusivity toward salvation. If we deny the truth of the exclusivity of Christ, we deny the divinity of Christ. If we affirm the validity of other religions, we are calling the divine Christ a liar.

It is one thing to endure the presence of a different religion, but that does not mean we must become relativists and say, “well if that’s what you believe, I’m sure it’s true for you.” I don’t need to validate your subjective identity in order to tolerate your objective existence.

A second aspect to toleration lies in the distinction between tolerance of an idea and tolerance of a being. For an ontologist, this is an easy distinction. For the rest of humanity, however, I can understand how this could be difficult.

Of course, this does not mean it is always unjust to attack the being, but in doing so you are removing the distinction insofar as you are attacking the being because of their ideas. In other words, when the US was physically fighting fascists in Europe they were necessarily fighting the idea of fascism at the same time. But again it is not required to engage in physical attacks against fascists in order to fight the idea.

For existentialists – pretty much every millennial out there – this is a harder concept to grasp. They are taught, and have accepted, that ideas and ideologies held are part of the intricate fabric of their being. That their existence, their experience, their insights, their identity, all make up who they are and how it contributes to their self-authentic being. And they cannot be separated without sacrificing a part of what one is. This is perpetuated by psychiatry and the arts.

So it makes sense to me that today’s generation has a very hard time accepting that someone can be against tolerating a claim as valid, while still tolerating the individual making the claim.

Karl Popper submitted for consideration what he called the paradox of tolerance, that sometimes to ensure tolerance it is sometimes necessary to exercise intolerance.

“unlimited tolerance must lead to the disappearance of tolerance. If we extend unlimited tolerance even to those who are intolerant, if we are not prepared to defend a tolerant society against the onslaught of the intolerant, then the tolerant will be destroyed, and tolerance with them.—In this formulation, I do not imply, for instance that we should always suppress the utterance of intolerant philosophies; as long as we can counter them by rational argument and keep them in check by public opinion, suppression would certainly be most unwise. But we should claim the right to suppress them if necessary even by force; for it may easily turn out that they are not prepared to meet us on the level of rational argument, because it is deceptive, and teach them to answer arguments by the use of their fists or pistols. We should therefore claim, in the name of tolerance, the right not to tolerate the intolerant. We should claim that any movement preaching intolerance and persecution as criminal, in the same way we should consider incitement to murder, or to kidnapping, or to the revival of the slave trade, as criminal.”

The only reason this scenario is a paradox is because Popper has equivocated the terms. If he hadn’t equivocated, it would no longer be a paradox – it would be a logical contradiction!

There’s no paradox – we should tolerate each other’s being; if our being is attacked, we defend it. But we should never be commanded to tolerate an idea as valid.