Jeff Schapiro at the Richmond Times-Dispatch takes embattled Democratic nominee Ralph Northam to the proverbial woodshed over his progressive radicalization — namely when it comes to his newly found angst regarding monuments to General Robert E. Lee and General Thomas “Stonewall” Jackson:

Going beyond the oft-stated view he had shared with Republican Ed Gillespie that monuments are a matter for local government to decide, Northam declared — unbidden — that if it were up to him, he would take all of them down. Post-Charlottesville, he suggested, Confederate symbols are hurtful and offensive, having been abducted by hatemongers.

Northam is playing to the Democratic base, further revving up the party’s most enthusiastic voters. But is he going too far with an issue that is more symbolic than substantive? Is Northam raising expectations that he would seek the eradication of Confederate iconography in venues beyond a governor’s direct control, risking confrontation with adversaries and allies?

So much for the debate on health care, jobs and education.

Northam’s radical position on Confederate iconoclasm has seen Northam’s handlers go from full-throated Antifa-style enthusiasm for the project to a very rapid backtracking over the last few days, as his fellow cadets at the Virginia Military Institute have taken umbrage over his politicization of VMI proper.

What has happened over the weekend is that Northam is desperately trying to get back to the Gillespie position — make the question a matter for local governments to decide — while attempting with all the skill of a verbal gymnast to reconcile his hat-tip to the iconoclasts.  Northam’s radio interview on WFIR says all anyone needs to know:

“I will tell you I believe these Confederate statues belong in a museum, and I will do everything that I can, that I have authority to do to remove the statues at the state level, and I will also be a vocal advocate for their removal elsewhere.”

Ir you want to listen to the full audio transcript, click here.  Nevertheless, Northam isn’t going to be able to get out of the straitjacket the iconoclasts have placed him in — you can’t simultaneously be in favor of whitewashing history with the fanaticism described here and be in favor of allowing the legislative process to go through the motions.

Herein lies the catch to the entire debate so far.  In America, when we want to change something, we have a process for this.  A law is drafted by a legislator, it is presented to a committee, revised and debated, then presented to the chamber for a vote.  A duplicative process is performed in the other chamber.  The two versions are reconciled in committee, approved by a sitting legislature, and duly signed off on by an executive to become law.

The other side simply forms a mob, beats reporters, and destroys what offends them.  Or they use the methods of judicial activism and executive orders, rather than constitution and the legislature.

If you want to understand even a fraction of the Trump movement, this is what drives 3/4th of their anger.

Whether it is Occupy, BLM, Indivisible, or Antifa, or whether it is cramming through a redefinition of longstanding institutions such as marriage or radically transforming an economy in favor of a “coalition of the ascendant” that laughs at the backwardness of those left behind, or whether it is the contempt and disdain shoveled upon those “bitter clingers” holding on to their guns and their faith — all of this piles up.

Feed into it a progressive wing of the Democratic Party that forces candidates to either go hard or go home — the Atlantic Coast Pipeline, abortion, repealing Virginia’s right to work laws, transgender bathrooms, and now Confederate war memorials.

So precisely how unpopular is this position to tear down Confederate war memorials?  In a Marist/NPR/PBS poll (yes, that NPR — yes, that PBS) the opposition isn’t just overwhelming, it is ironclad: 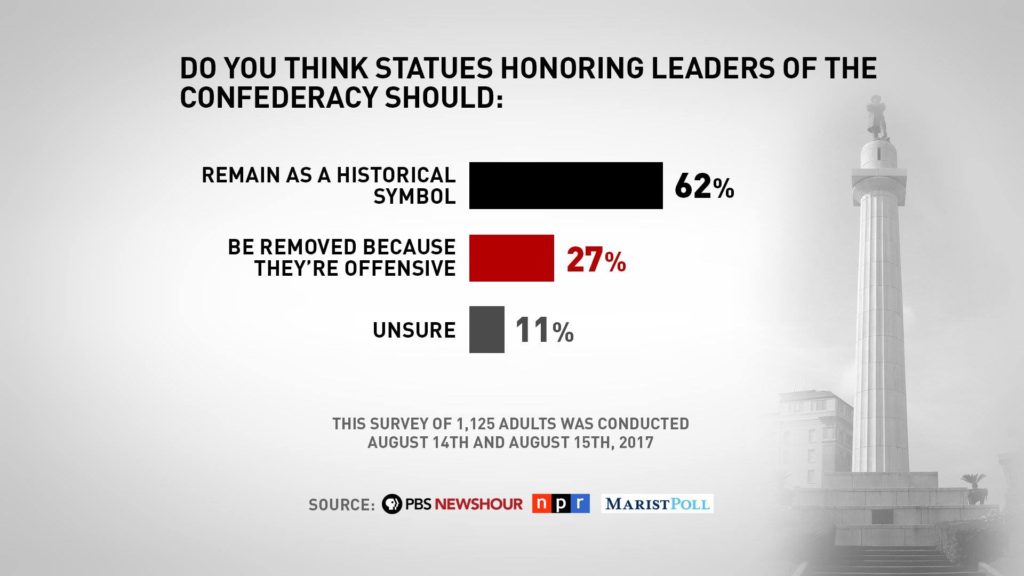 Most Americans want to see them stay put.  Problem is, Democrats can’t win without their progressive base — so they have to bend the knee or get savaged by the extremists in their own base.

…but Northam is forced time and again to kowtow to it by a progressive base that is both amazingly intolerant of process and votes Northam cannot do without.

Rather, if you want to look for real leadership on what has now become a national conversation, look no further than Lynchburg:

“Late in the evening, one of the Monument Guards noticed this woman, who later identified as a Black Lives Matter supporter, trembling and shaking with fear. He said he could tell she honestly feared them. He walked up to her, arms outstretched, said ‘we are not KKK’ and she grabbed him and wouldn’t let go. He explained that they were here to stop all of this and prevent another Charlottesville,” the post continued. “He said ‘If I were KKK would I hold you like this and she said ‘No.'” 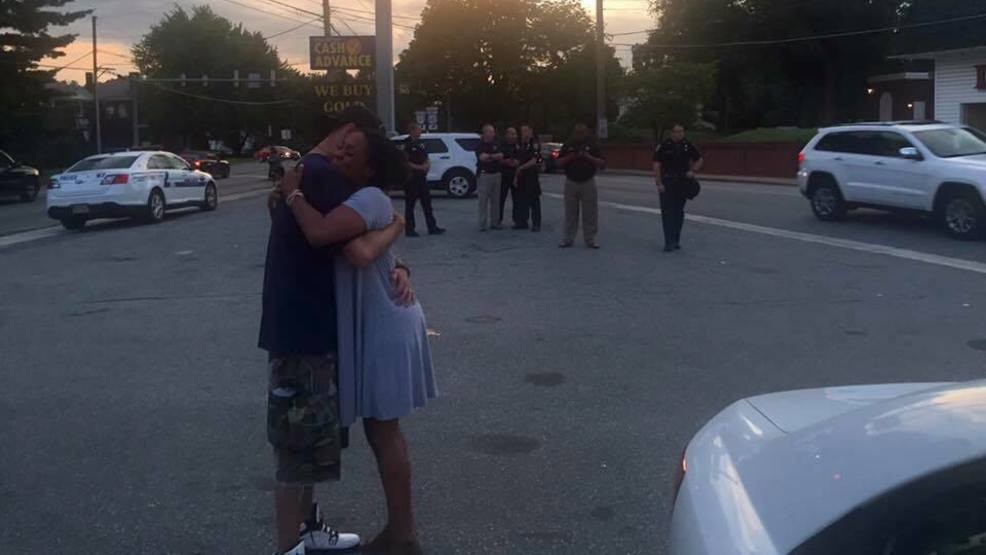 What we don’t need are political opportunists trying to either cash in or save their floundering campaigns by buckling under progressive pressure.