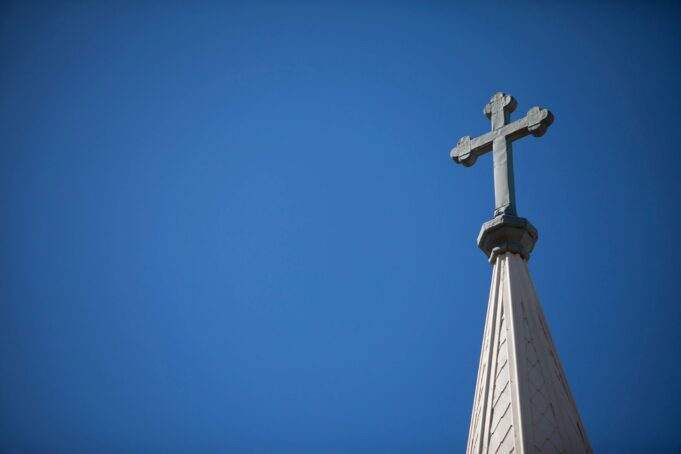 The Freedom From Religion Foundation (FFRF) is publicly attacking Tazewell County Sheriff Brian Hieatt for his Christian faith, this time for a social media post where he thanked a Christian pastor for inviting him to church.

More from Charles Boothe at the Bluefield Daily Telegraph:

Hieatt was referring to a letter he recently received from the Freedom From Religion Foundation, a Wisconsin-based group that promotes the separation of church and state.

“A concerned local area resident reported that the Tazewell County Sheriff’s Office posted a reminder to ‘Exalt the Lord’ on the upcoming (May 2022) National Day of Prayer (NDP) at Cornerstone Church on the Sheriff’s Office’s official Facebook page,” the letter said. “It is our understanding that you actively participated in this event, in your official uniform, and even led a prayer for local community members.”

The letter, from FFRF staff attorney Christopher Line, went on to say the Sheriff’s Office “regularly posts religious messages on its Facebook page, including a post on May 22, 2022, which thanked a pastor for inviting the Sheriff’s Office to attend and participate in a church service at Parkview Baptist Church.”

Of course, the FFRF — whose idea of laicization runs directly contrary to both basic civil rights and inherent rights recognized in the US Constitution entailing a right to religious freedom — knows that statements such as “Exalt the Lord” are metaphysical arguments in the purest sense of the term.  It is neither denominational nor confessional, ergo it is not using the public trust to unduly influence or exclude others with either a public test or an irrationally held position.

FFRF may choose to argue that metaphysical arguments are non-rational.  Yet then again, so are explanations for beauty, value, and the good — and each of these can be rationally defended by people of good will.

FFRF has already been labeled an “anti-Christian hate group” by many who have been targeted by their litigious and direct method of coercing speech in the public square.  There are a number of petitions circulate online attempting to get a public authority — or perhaps even the Southern Poverty Law Center — to categorize left-leaning or anti-Christian groups as hate groups, yet none have come to any sort of fruition even among those who claim to be “liberal” in their outlook.

The FFRF has been known and criticized for engaging in Westboro Baptist Church-style tactics in order to humiliate, target and coerce Christians even on days such as Easter Sunday:

On the other side of the argument was Faith and Freedom Foundation Deputy National Field Director Virginia Galloway, who said she thought it was “kind of sad” that during this week of religious celebration “we are attacked and denigrated.” She said, “They certainly have a right, a constitutional right to express their opinions and many good people have fought and died for that right for them as well as us, and I appreciate that.”

“But at the same time, it just seems kind of without class, kind of like the Westboro crowd and the things that they did,” Galloway continued, evoking the Christian protest group best known for picketing funerals with signs that say things like “God hates (a derogatory term for gay men) ” She added, “Sure, maybe they had a right to do it, but it just seems very wrong.”

Rather than question Galloway’s analogy, Earnhardt seemed to agree, asking Gaylor, “What about manners here?”

No word on whether they have attempted such tactics against either Muslims or Jewish believers on their holy days.  Which is by no means an invitation, but certainly an interesting note to make.

This is not Hieatt’s first entanglement with the FFRF, who again was targeted in 2016 for putting the national motto “In God We Trust” on police vehicles.

In Buchanan County, the same FFRF signed a letter in 2021 castigating public officials there for opening their meetings with a Christian prayer.  Such prayer has long been defended in US courts and predates the US Constitution as a means of opening meetings in the Anglo-Saxon tradition.

Hieatt does not seem terribly inclined to back down:

“It is the citizens in Tazewell County who elected me and they know my stance on religion and it’s up to them whether they keep me in office,” he said.

Meanwhile, organizations such as the FFRF and Westboro Baptist Church continue their campaign of exclusion and division in the public square — primarily (and curiously) against Christians themselves.

As for the political slant of both the media and left-wing groups such as the SPLC when designating what is and what is not a hate group, Orthodox Jews have long complained about the lack of support from the secular left, up to and including their support for anti-Israeli BDS activities.