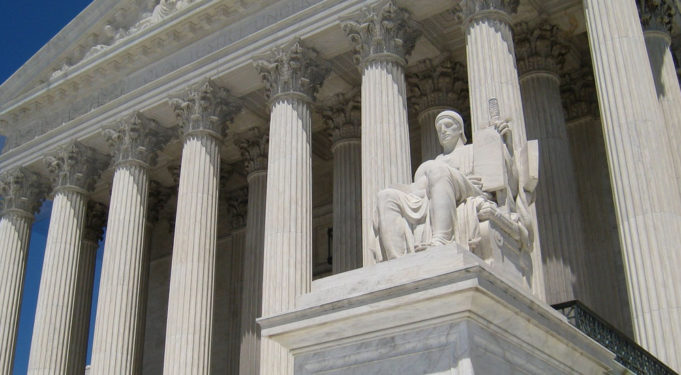 Rep. Alexandria Ocasio-Cortez (D-N.Y.) took a victory lap on social media after blocking legislation that would have boosted security for Supreme Court justices and their families.

Although it passed the U.S. Senate with bipartisan support, Ocasio-Cortez and others have stalled the Supreme Court protection bill in the House.

The day after a radical leftist attempted to assassinate Justice Kavanaugh, AOC is on Instagram bragging about how she stopped a bill designed to protect Supreme Court justices & their families. pic.twitter.com/G1qKncr4bl

Ocasio-Cortez posted a video of her running to stop the legislation from passing. According to her, lawmakers were trying to pass the bill on a “fly out” day when members of Congress return to their districts. These days, the congresswoman said, are filled with “maximum hijinks” from leadership in both major parties.

“I wake up this morning and I start to hear murmurs that there is going to be an attempt to pass the Supreme Court Supplemental Protection Bill the day after gun safety legislation for schools and kids and people is stalled. Oh, so we can pass protections for us and here easily, right? But we can’t pass protections for everyday people? I think not.”

It’s conceivable that Ocasio-Cortez will continue to impede the bill despite Speaker Nancy Pelosi (D-Calif.) saying that the House would take up the bill “at the beginning of next week” following the attempt on Kavanaugh’s life.

To the man, slaying Kavanaugh — then himself — was a means to give his own life purpose, according to the affidavit’s summary of his interview.

The summary of the case submitted to court by an FBI agent makes no mention of the stated psychiatric distress.https://t.co/NRplgmMSZN