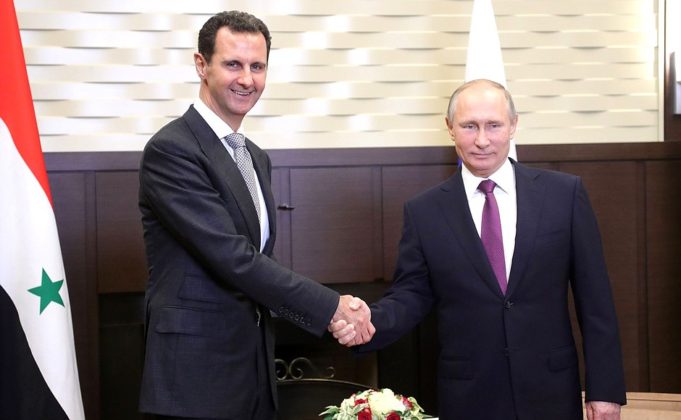 My friend, you would not tell with such high zest
To children ardent for some desperate glory,
The old Lie: Dulce et decorum est
Pro patria mori.

The line is borrowed from Horaces Odes, and roughly translated it means “it is sweet and proper to die for one’s country” in a heroic poem about the virtues of struggle and battle.  It is also inscribed above the portal to the Memorial Amphitheater at Arlington National Cemetery, where many veterans of the Iraq and Afghanistan conflicts have found their final rest.

Anywhere from 80-100 Tomahawk missiles — a mainstay of the evening news in the 1990s during the Persian Gulf War — are currently parked in the Eastern Mediterranean, with additional U.S. assets at Anzio and Incirlik should the need arise.  Already, the USS Donald Cook has sailed out of port this Monday, and with calls for any military strike to “hurt” rather than provide a show of force, more firepower will be brought to bear this time rather than the 59 Tomahawk missiles used in 2017.

Each Tomahawk missile costs just about $1.4 million dollars.  Without counting the long train of logistics required to extend the reach of the U.S. military to that part of the world, the last missile strike cost the American taxpayer $82.6 million dollars — all in an effort to strike an empty airstrip which Syrian and Russian personnel were able to repair within 24 hours.

At stake here is our commitment to the non-proliferation of weapons of mass destruction.  Tested under President George W. Bush, the end result was the 2003 Iraq War which resulted in old caches of pre-1991 chemical weapons, but nothing that indicated a nascent or dual-purposed chemical and biological weapons program.

There was a net result missed by the anti-Bush left.  Libya and Syria both took aggressive steps at curbing their WMD programs, with Syria getting a bit of an assist from the Israeli Defence Forces in September 2007.  Both nations caught the business end of the Arab Spring, mired in civil war that shows no signs of abatement.

The lesson is simple.  Nations with nuclear weapons do not experience regime change.  Pakistan has long been a pariah state working with the Taleban in Afghanistan.  North Korea continues to test missiles while holding Seoul hostage with an arsenal of rocket propelled artillery pieces.  Iran cut a deal with the United States and European Union to slow — but not prevent — the acquisition and development of nuclear weapons and their delivery systems.

The problem in Syria is three fold.  First, this is a mess that the United States instigated and helped to create in the pursuit of the Arab Spring.  Second, it is a mess that the Russians are cleaning up in heavy-handed fashion (see: Chechnya).  Third, with the red line for WMD non-proliferation already crossed as a matter of policy by the Obama administration, what possible response can the United States have other than to create more violence, death, and destruction.

Over one million people have been killed during the Syrian Civil War — a war the United States helped create.  Over five million Syrians have been displaced as a result of our policy of backing Syrian “moderates” such as al-Qaeda (yes, that al-Qaeda).  ISIL — the brainchild of former Saddam Hussein intelligence chief Izzat Ibrahim al-Douri — quickly took root in eastern Syria before swarming back into northern Iraq, another problem created because American policy makers under the Obama administration rushed the withdrawal from Iraq.

Military force has not served us well in Syria thus far.  The application of further military force will not lessen the likelihood of yet another chemical weapons attack in Syria.  The Russian Federation is committed to the survival of the al-Assad regime.  Every day that goes by, the negotiation position of the so-called moderates is lessened.  Turkey is showing little sign of helping the anti-Assad elements any further, and so the endgame of an enduring loss in northwestern Syria is no longer a matter of question, just a matter of time.

Should the al-Assad regime be punished for its use of chemical weapons?  Most certainly.  Yet short of the international resolve to remove such pariahs from our midst, there are few practical policy alternatives.  The Obama administration perhaps irrevocably set American foreign policy on the path of cutting deals with nations who pursue such weapons, thus tearing into shreds the United States’ former commitment to non-proliferation.  In short, there is no “red line” to enforce anymore.

One path does remain.  If peace is on the minds of policy makers, and a cessation of hostilities as the short path towards allowing 5 million Syrians to return home, then the amount of treasure about to be spent committing more violence for an aim that can no longer be achieved would be best spent stabilizing a truce.  Already, the Russian government in collaboration with Saudi Arabia has been working with Turkey and Syria to impose a series of truces along a path towards stability.  Getting a seat at the table — or at the very least, allowing another nation such as France to enter into Syria and rebuild the country — would be a far more productive means of preventing further uses of chemical weapons against the Syrian people.

Moreover, it is perhaps time for the United States to re-evaluate its position on the proliferation of weapons of mass destruction.  Today’s world has become more dangerous than ever, and with events in Syria demonstrating the futility of enforcing such international norms without the full concert of world diplomatic power consenting to the framework?  Futile demonstrations of power or short-term deals will not resolve the true question at hand.

If the United States is committed to ending the prevalence of weapons of mass destruction, a core understanding as to why Syria, Iran, and North Korea pursue such options should be made manifest — neither Kim Jong-Un nor Bashar al-Assad nor Hasan Rouhani want to be dragged out of a spider hole, much less beaten to a pulp by a mob as Muammar Qaddafi was.  American interventionism as a means of imposing the Pax Americana requires a rethink in a serious way.

A cookie cutter foreign policy with regards to Western values of democracy and human rights is rarely a wise course.  The United States can indeed rebuild nations, but it has only done so successfully twice, and in each instance it required 10 years and a Marshall Plan: Germany and Japan.  Even in other instances — the American South, Haiti, Vietnam, Iraq, Afghanistan — nation building is not particularly an American strong suit, precisely because our institutions are best suited for Americans, not best because we as Americans created them.

One of the great lessons of the collapse of the Soviet Union was that American soft power and markets held an almost mystical sway over closed societies.  Rather than attempting the forcible ouster of al-Assad from power with $82 million dollars of warfare, one might consider what $82 million of peace would provide.