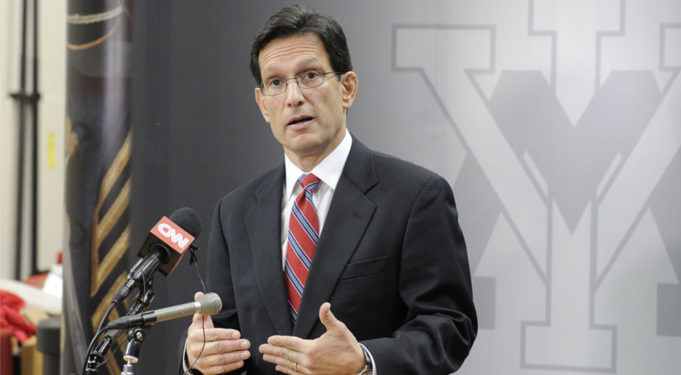 Even as a somewhat recent addition to Virginia, one particular thing about Republican politics in this state has stood out to me from the very beginning, even when I first started out at Randolph-Macon College in the fall of 2014: no one can hold a grudge like a Virginia Republican.

It seems as though nearly every Republican in the Commonwealth of Virginia has either been asked, or has asked this question of others: “Did you support Cantor or Brat?”

Because whenever someone shares a post and adds his or her own commentary, some seem to view this Brat Pack/Cantorite distinction as a call to debate — and will commence commenting with their thoughts (or attacks).

You will discover that you are likely one of the very few who haven’t picked a side.

It is now four and a half years after Dave Brat defeated then-Majority Leader Eric Cantor, and yet a noticeable number of Virginia Republicans still feel animosity towards either man.

Take a look at Facebook comments in one of the many Republican/conservative Facebook groups for Virginians, and you’ll find mention of someone’s scorn for Cantor and the “establishment” and another’s contempt for Brat and the “tea baggers”.

Factionalism at its best.

After a night out with fellow millennials in late August last year, we walked back to my car, which happened to have a large Brat sticker on the back. One of the passengers was someone I had just been introduced to that night, and upon seeing the sticker, he quickly asked why I supported Brat over Cantor, which prompted some groans and mild debate from the others.

My response: I was working on now-Congressman David Rouzer’s primary campaign in North Carolina during the spring of 2014. Though I was an incoming Randolph-Macon freshman, I had no idea who Brat was until news of his victory came up on Fox News the day he won and one of the reporters mentioned that he taught at Randolph-Macon.  The college definitely should have better publicized the fact that two professors were running for the same seat in Congress–what a great recruiting tool for the political science, business/economics, and sociology departments.

I had not been aware that someone had dared challenge the House Majority Leader because I was focused on politics in my own state and making sure my boss won his election.

Yes, Virginia lost out on the possibility of having one of its own representatives lead as the Speaker of the United States House of Representatives. Maybe the Seventh District really isn’t getting the same resources it did while it was represented by the then House Majority Leader.

But you know what? Brat is a decent person who strongly retains his values, even after having spent four years as a United States Congressman.

We must move forward and focus on what we can do for the future of the district and the party, especially now since the district has now gone blue.

We must continue to focus on having a “Big Tent” mentality for the party, which includes diversity outreach and ensuring all have a seat at the table, regardless the faction.

Yet the Cantor vs. Brat grudge is just one example of the many grudges that are holding down this party in the past instead of looking towards the future, and both the “grassroots” and the “establishment” (whatever those terms mean anymore) need to be professional and let the past remain in the past.

If we don’t, then you better get used to seeing more and more Democratic victories and seat-flips in the Commonwealth.