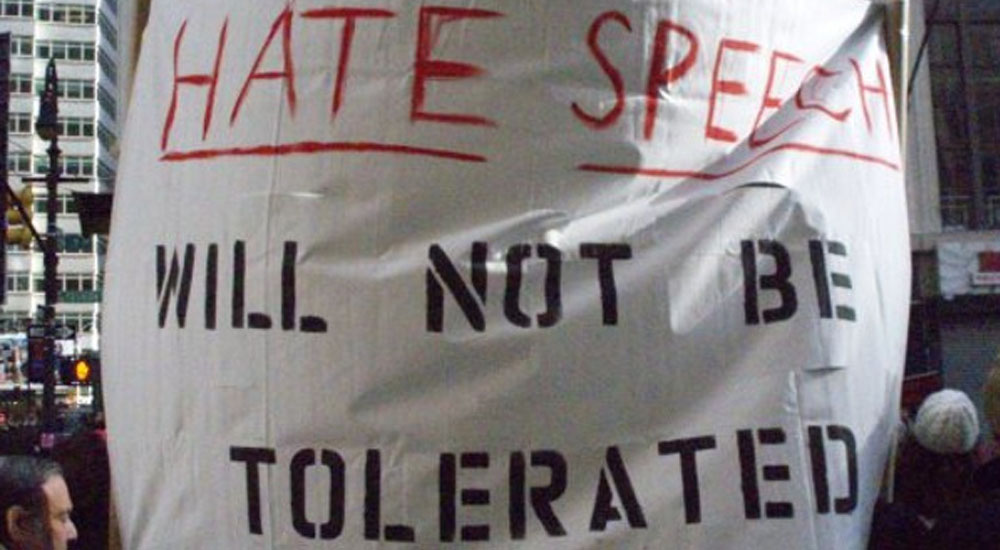 I was also taught that not everybody would do me the same courtesy.

Growing up, I learned to be strong. I was taught not to listen to the bullies who called me names or cracked jokes at my expense. I know what it feels like to have classmates use words to tear you down and cut you open. Like most kids, I learned the hard way that people could be cruel and hateful and mean. Growing up, I learned all the same lessons that kids learn these days, save for one.

The hateful words spoken by schoolyard bullies DO NOT MATTER.

I never learned that their words matter. I was never taught to believe that lie. In fact, I was taught the complete opposite. The lesson that I was taught was a lesson of empowerment: “Sticks and stones may break my bones, but words will never hurt me.”

But these days, when you search “Sticks and stones” on Google, you get an entirely different message:

“Whoever said sticks and stones may break my bones, but words will never hurt is a lie.”

“Sticks and stones may break my bones, but words will only cause permanent psychological damage.”

“Sticks and stones leave bruises and they heal, words are NEVER forgotten.”

“Words hurt. I have scars to prove it.”

In today’s society, people go to great lengths to earn words of praise or affirmation. We strive to look like airbrushed men and women we see on our TV screens and in magazines. We watch make-up videos, buy the trendiest clothes, try the latest fad diet, watch the most popular TV shows, and listen to the most popular artists. In today’s society, we are all consumed by a desire to mold ourselves into society’s model of perfection, fueling a consumer market that thrives off insecurities and need to be like everybody else.

According to the NCHS, the suicide rate for teenage girls (aged 15-19) is the higher today than in the past 40 years. In the past 45 years, the worldwide suicide rate has risen 45%. Between 1999 and 2016, a study by the Agency for Healthcare Research and Quality showed the number of children under age 12 who were hospitalized for an eating disorder rose 119%. Among college-aged women, 25% have tried binging or purging as a weight-management technique. Self-harm or self-mutilation is on the rise and depression rates have soared.

I hear older Americans lament all the time about how materialistic and self-absorbed younger generations have become. But can you honestly blame them? They are living in a world of political correctness where words are used both as currency and weapons. Kids these days are taught that other people’s words hold power over their lives. They were taught that words matter. And since they didn’t teach this to themselves, can you really blame them for acting accordingly?

So they take dozens of selfies before finding the perfect one to post. They delete Instagram posts that don’t garner enough “Likes”. They tear up their closets in search of the perfect outfit. They keep their eyes glued to their cell phones as they wait for the rest of the world to tell them who they are. As they strive for words of affirmation, they consequently isolate away from any words or opinion that doesn’t conform with their ideals or notions of reality.

Since words matter, it is better that they seek out echo chambers, hiding away from contrasting opinions and words they do not wish to hear. Since words matter, they request “trigger warnings” and hide away in “safe spaces” to avoid offensive words or words they disagree with. By classifying words as a weapon, society has taught our children to be weak and insecure.

If Words Have Power

Now America finds itself in a war over political correctness as our society continues its self-righteous crusade to defend “feelings” and attack free speech. By perpetuating the false notion that our own self-worth is determined by the thoughts and words of others, we have fallen victim to soapbox opportunists and media-driven hysteria.

In a world where words have power, riots break out at UC Berkeley as Antifa protests appearances by Ann Coulter and Milo Yiannopoulus.

In a world where words have power, the Ku Klux Klan, neo-Nazis, and other white nationalist groups stage a demonstration in Charlottesville and violence breaks out and the life of a young girl is taken far too soon.

In a world where words have power, a TV journalist is assaulted while filming a protest in Richmond in the wake of the violence in Charlottesville.

There will always be people who say ignorant things and think ignorant thoughts. Things we disagree with. Things we know to be immoral and universally wrong. But ignorance is not illegal. And ignorance will not be overcome simply by silencing ignorant people, no matter how much we wish it were that simple.

It’s time that we stop giving words power and start empowering each other.

The hateful words spoken by schoolyard bullies DO NOT MATTER.

The ignorant words spoken by hate mongers DO NOT MATTER.

The words of racist, fascist, white nationalists DO NOT MATTER.

“Sticks and stones may break my bones, but words will never hurt me.”

You are not defined by the thoughts and words of others. You are not a victim. You are the only one who gets to decide who you are and what you’re worth.

Nobody else gets that privilege.

You get to decide whether or not to treat others with kindness, even though you will not always be treated the same in return. I hope you choose to embrace your own beauty and power.

I hope you choose kindness every time.