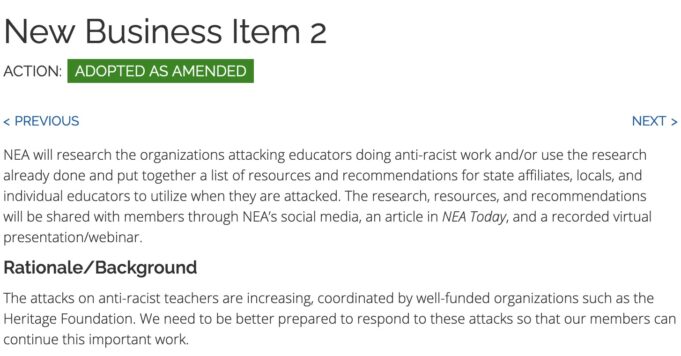 If there was any doubt, it’s gone now. Critical Race Theory is in our schools, and it is being pushed by the same people who wanted to keep our schools closed during the pandemic.

During its annual Representative Assembly, the National Education Association voted last week to stand fully behind those who want Critical Race Theory, “anti-racsim,” and other far-left teachings applied to schools across the country.

Critical Race Theory is an academic worldview which holds that racism is possible without racists, and that the entire governmental structure of the United States is founded upon and steeped in white supremacy.

“Anti-racist” teaching, as advanced by the union, holds that the only reason for disparities between racial groups in virtually all areas is racism, and that things such as “colorblindness” are actually racist.

NEA, the parent union of the Virginia Education Association, committed itself to “provide an already-created, in-depth, study that critiques empire, white supremacy, anti-Blackness, anti-Indigeneity, racism, patriarchy, cisheteropatriarchy, capitalism, ableism, anthropocentrism, and other forms of power and oppression at the intersections of our society, and that we oppose attempts to ban critical race theory and/or The 1619 Project.”

Catch all those left wing buzzwords? Notably they name capitalism as a system of power and oppression, in addition to racism, white supremacy, and anthropocentrism. That last one means a “human centered” point of view.

First published in the New York Times, The 1619 Project was an error-filled publication from the New York Times that contended that the true founding of America was in 1619, when the first African slaves arrived in Virginia — and that the U.S. was founded on the idea of slavery.

The union also resolved to “commit President Becky Pringle to make public statements across all lines of media that support racial honesty in education including but not limited to critical race theory.”

They’re not going to sit around and take flak from parents anymore, either. The union voted to begin active pushback against opponents of CRT and other racialist teachings.
As the union adopted in New Business Item 002:

“NEA will research the organizations attacking educators doing anti-racist work and/or use the research already done and put together a list of resources and recommendations for state affiliates, locals, and individual educators to utilize when they are attacked. The research, resources, and recommendations will be shared with members through NEA’s social media, an article in NEA Today, and a recorded virtual presentation/webinar.”

The documents have been scrubbed from the union’s website, but were captured by the Internet Archive.

But remember parents, Terry McAuliffe and Virginia House Democrats assure you that any and all appearance of Critical Race Theory in our schools is simply a right wing conspiracy.