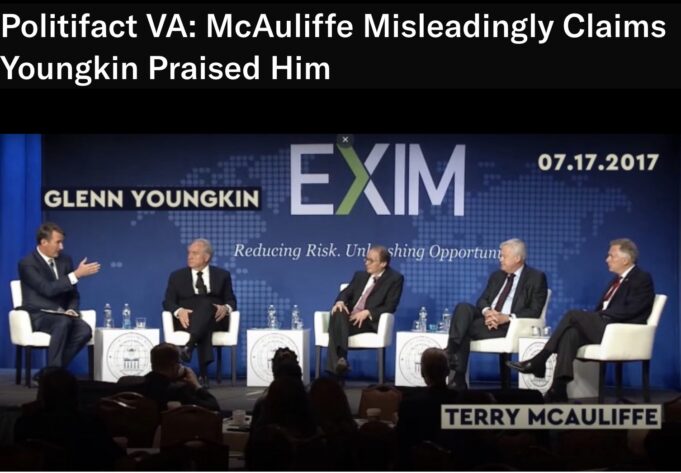 The ad presents video showing what looks like Republican Glen Youngkin praising Terry McAuliffe’s leadership of Virginia in 2017.  But the ad cuts Youngkin’s words and takes them out of context to twist their meaning. Archived version here.

“The ad edits and alters Youngkin’s sentences and, in instances, presents them out of context…

“The quote seems adulating, but critical words were cut. The context was neutral; Youngkin was simply asking McAuliffe to explain how he goes about recruiting foreign businesses to Virginia…

“So, contrary to McAuliffe’s assertion, Youngkin’s 2017 words do not prove he was a ‘big fan’ of the former governor’s economic policies, or that his current criticism of McAuliffe’s stewardship is a flip flop.”

But in a strange twist, the story was retracted on Tuesday afternoon. Virginia Public Media issued the following statement via Twitter.

“We’ve retracted a Politifact piece on a McAuliffe campaign ad due to a substantial omission in our reporting. We apologize for our error and will publish a retraction notice on the VPM site.”

As of this writing, it’s unclear exactly what the ‘error’ could be. The ad wrongly stated that Youngkin was praising McAuliffe’s record as governor, and it brought the transcript quotes to prove it.

While the Richmond chattering class is abuzz, one thing is clear: any change will require a massive move of the goalposts.