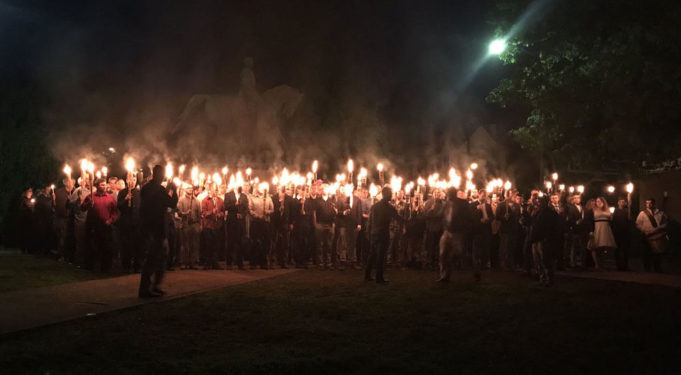 This weekend we as Republicans were brought face to face with the worst elements of our party.

The entire world watched as violence and hatred exploded at one of our most beloved cities and on the campus of our flagship university.

Though many of the bigots in Charlottesville are not Virginians it is Virginia they chose to make a stand and they did so under the the banner of “The Right.” We must look in the mirror and ask ourselves, “why did they choose our state and our party?”

The answer is simple.  Because too many of us allowed it.

We allowed it to fester in our local committees, and we watched it brought into the open by a candidate desperate for statewide attention.

While many courageously spoke out, many more, including myself, stood by assuming that in 2017 it would all go away. It is not going away, and our silence is giving it oxygen to burn brighter and more dangerous by the day.

I can no longer turn my head to the ugliness in the room. I can no loner pretend I don’t hear the comments or see the Facebook posts. I can no longer say the alt-right doesn’t exist or it is just a fringe element. It is real. It is here, and it threatens to destroy the party of Lincoln.

We must muster the courage to fight the enemy within our party. These people are not Republicans, Conservatives or Libertarians; they are opportunists seeking to use our party for their purposes. The alt-right is alien to what we believe and the principles to which our party was founded. Like a parasite they attach themselves wherever they can, only to destroy everything around it.

While the term alt-right may be new, their ilk is not new to American politics. They have taken many forms through the years, sometime as Democrats and sometimes as Republicans. Like a blood thirsty tick they move from host to host as they search for a power base they could never create on their own.

It is not enough to walk away from them, we must defeat them at every turn. We must engage in our local committees and shut them out of any leadership position. We must oppose any candidate associated with hatred and segregation of any kind. We must offer no comfort and no quarter.

Scott Mayausky is the Commissioner of Revenue for Stafford County, Virginia.