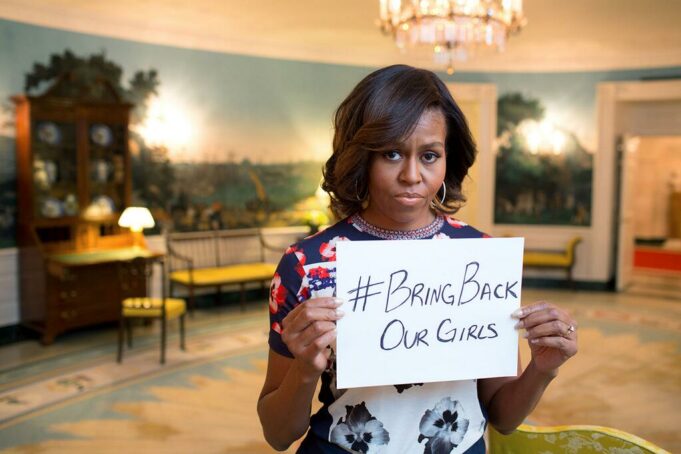 Where are you going, and who benefits? Those are the two inescapable questions that Del. Ibraheem Samirah’s outburst in Jamestown have raised.

Having now become a media darling for his brief outburst toward President Trump, Samirah is fully engulfed in the warm glow of the liberal adoration.

But those two ancient questions remain: where is he going, and who benefits? Or said simpler, what did this elected official with two whole days of legislative experience accomplish, other than self-aggrandizement?

Mrs. Obama led a worldwide effort to create a viral hashtag moment with #BringBackOurGirls, and to a large extent, she succeeded. Millions of people around the world were moved, and joined in the campaign.

Except for the kidnappers, who likely never saw the hashtags, and if they did, didn’t care.

Twitter is not the real world. The kidnappers released the bulk of their victims years later after negotiations that secured the release of five of their own captured leaders.

The adoring glow of a fawning left-wing press corps isn’t the real world, either.

Reporters, hosts, and bloggers may swoon over such acts of ‘bravery,’ but at the bottom line, they accomplish nothing but public demonstrations of liberal ‘virtue’ and an unhealthy boost to the ego.

What did you accomplish, Delegate? Did you change any minds? Unlikely. Opinions of President Trump are as fixed as they are strong. After all, if “calling out” the President changed minds, President Trump would have no supporters left anywhere.

Did you change the President’s mind?

Based on his comments after arriving back at the White House, it seems unlikely in the extreme. Donald Trump has been heckled by more people, in higher positions, on more occasions. One state Delegate with a laminated sign isn’t something new and unexpected.

Delegate Samirah thinks ‘incivility’ is the path to change. Writing in The Atlantic (and taking a shot at Rep. Elaine Luria, D-2nd) he said:

“So to the critics of incivility, especially those who ‘would have liked to see a little more decorum,’ like one Democratic member of Congress who commented on my actions, I say it’s time to think critically about who such decorum has traditionally served: the white, wealthy, and comfortable.”

“When the levers of powers are stripped from those who are marginalized, disruption is often our only shot at breaking through,” he wrote.

“Instead, we need to build a new Virginia Way, one that isn’t obsessed with civility, but rather obsessed with love, equity, and justice for all,” he wrote. “We need to do what’s right for our communities instead of what is polite to the powerful.”

How exactly does one “break through” by shouting at the President in a public location?

To paraphrase the great Rick James, political inexperience is a hell of a drug.

Shouting at the president of your university in public may bring about change. Shouting at the leader of the free world — after having been elected to the House of Delegates, not so much.

Virginia is not one giant liberal arts college campus, and reality doesn’t care what you believe. For those who doubt, go to the edge of a cliff with the earnestly held belief that you can fly, and jump.

In the end, Delegate, you lifted yourself onto a pedestal, seeking to bring about your own apotheosis at the expense of a historic event.

And it comes at the expense of your constituents, who chose you as their advocate in Richmond, a place that very much runs on civility. A place where real change and real results require consultation, compromise, and comity.

Your voice, which your constituents need, is now a voice that has now antagonized both Republicans and Democrats.

The end goal of elected office isn’t appearing on MSNBC. It’s serving your constituents. Good luck with that going forward.