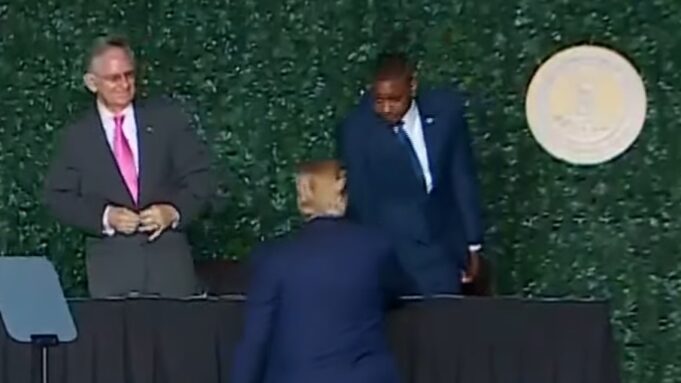 For all the talk of Del. Ibraheem Samirah’s disruption of President Trump’s speech in Jamestown this week, at least one Democrat thought the event was bigger than themselves. those in attendance.

Lt. Governor Justin Fairfax not only attended the event, but welcomed President Trump with open arms a handshake from the dais.

Some things are bigger than politics, Fairfax said in a statement before the event.

“I intend to honor, in this 400th anniversary year, our proud achievements as a representative democracy and the achievements of the enslaved African-Americans and their descendants who have contributed mightily to Virginia’s success,” he said. “That is more important than the frenzied and fickle politics of the moment.”

Those enslaved Africans who have been cast into eternity largely with anonymity need us now to stand up and recognize their lasting contributions and to celebrate their faith, perseverance, and triumph of spirit in the face of unimaginable cruelty and seemingly insurmountable odds.

For his part, President Trump also noted the beginning of slavery in America, and called for the nation to remember those who suffered under it.

“It was the beginning of a barbaric trade of human lives,” he said. “Today in honor, we remember every sacred soul who suffered the horrors of slavery and the anguish of bondage.”

The Virginia Legislative Black Caucus boycotted the event, saying those who attended were “complicit in the atrocities” incited by Trump.