Home News Ukraine Handing Out Guns to Fight Russians as Capital Kyiv Encircled
Facebook
Twitter
Google+
Pinterest
WhatsApp
As Russian forces continue to pound Ukrainian military positions and advance on the capital, Kyiv, the government is seeing the value of an American-style Second Amendment as it hands out small arms and calls on its citizens to resist the invading troops. Business Insider reported that Ukraine’s president has called on citizens to take up arms and join the fight. They can join the ‘area defense forces’ and will be given weapons as long as they have ID.

We will give weapons to anyone who wants to defend the country. Be ready to support Ukraine in the squares of our cities.

Ukraine’s Armed Forces also said in a tweet. “All those who are ready to take up arms, join the ranks of the area defense forces of the Armed Forces of Ukraine. We simplified procedures. Only your ID is needed. We give weapons to all patriots!” 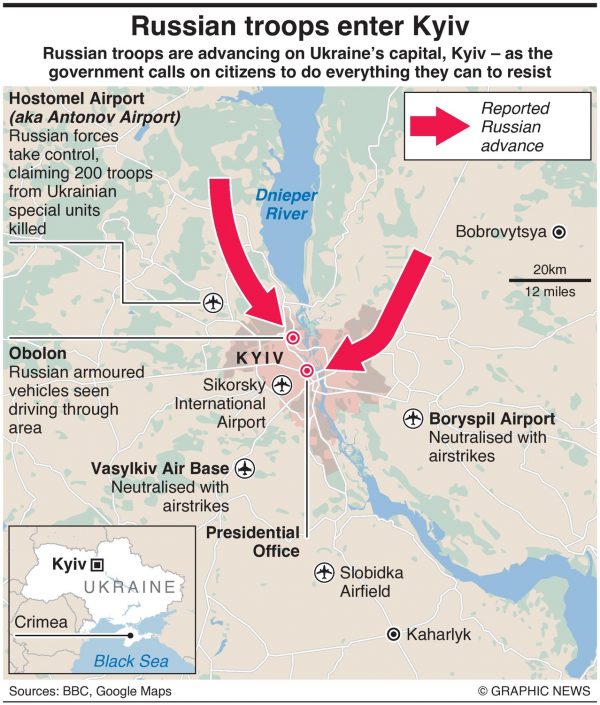 Sources say that at least 18,000 automatic rifles have been given to Kyiv volunteer fighters and step-by step guide to making petrol bombs (Molotov cocktails) has been posted on the Ministry of the Interior’s social media platforms.

The planned use of Molotov cocktails by Ukrainian fighters is ironic considering its history.

The term “Molotov cocktail” was coined by the Finns during their 1939-40 Winter War with the Soviet Union. It referred to the duplicitous Soviet foreign minister Vyacheslav Molotov, who helped craft the Molotov–Ribbentrop Pact non-aggression pact between the Soviets and Nazis signed in 1939.

When the hand-held bottle firebomb was created to attack Soviet tanks, the Finnish fighters called it the “Molotov cocktail,” as “a drink to go with his food drops.”

Now it is time to give the Russians more drinks to go with their invasion.