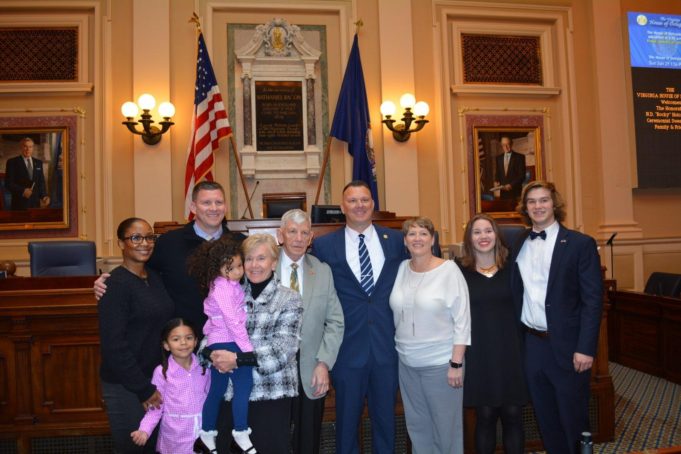 In past elections, we’ve asked our “independent” and “moderate” friends to consider our Republican candidates based on the issues. However, on this election eve, let’s ask them to consider using their vote to send a message.  A message that we demand civility back in politics.  That elections should be about issues and not about trying to convince voters that the other candidate is evil. Especially, when that candidate is a good person, with a servant’s heart and loving family who is just trying to make our community a better place for those who sometimes get left behind.

Take for example, Rocky Holcomb, delegate for the 85th District in Virginia Beach.  Rocky served in the US Marines and still serves as a deputy with the Virginia Beach Sheriff’s Office.

This is the flyer that Rocky’s wife was shocked to encounter in the community yesterday calling Rocky a “racist.”

Rocky’s children have also been questioned about it by friends who had it delivered to them as well.

It’s time that we denounce this “win at all costs” mentality!  Elections should be about ideas and the issues important to those you represent, not about trying to make a good person look evil.

Oh, and what is the issue that drives Rocky to run for public office and that he’s extremely passionate about?  It’s helping those with mental illnesses, like those he sees every day in his jail, knowing that most don’t belong there; they belong in a hospital receiving the treatment they need.

But, his opponent feels it’s justified to pay for and authorize a flier calling Rocky a “racist” and dispersing it throughout the community for his wife and children to see and get questioned about by friends and neighbors.

Growing up, I was taught that racism was a serious matter.  That it was wrong, hurtful, and should not be tolerated.  Unfortunately, it seems in this political cycle that word gets thrown around like candy on Halloween to attack good people just because a candidate can’t find another way to win an election.

It’s time to ask our friends as they decide on their candidate of choice, regardless of their political leanings, to consider the character assassinations that have taken place on good people and their families, and join us in not only supporting good people like Rocky Holcomb, but also in sending a message that this type of campaigning will no longer be tolerated.