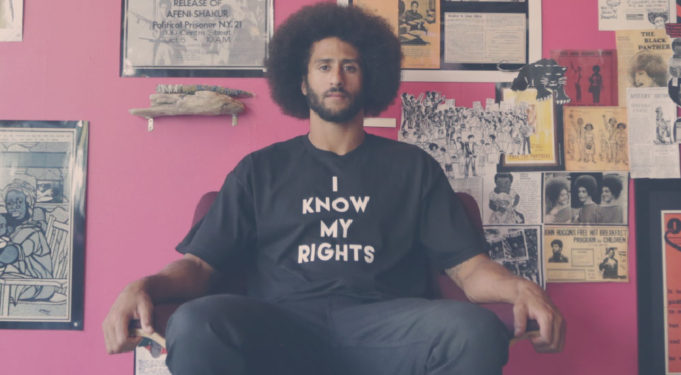 When Colin Kaepernick first sat down for the national anthem during a preseason NFL game last year, he justified it by saying that the issue of police violence was “bigger than football and it would be selfish on my part to look the other way.”

The tragic thing is that he’s right on the first part: life-and-death issues are indeed bigger than football, and having an athlete publicly express that isn’t automatically bad.  But as he fell in love with the idea of being a radical, his statements got increasingly ridiculous, and his exclusion from an NFL roster got increasingly justified.

The issue of his career has flared up again due to recent injuries among starting quarterbacks on current NFL teams.  In terms of pure football performance, Kaepernick is demonstrably better than a large number of currently employed QBs, including virtually every backup.  So the calls of “blackballing” and “cowardice” have grown loud from those who either see Kaepernick as a social justice hero or believe that advocacy and NFL employment shouldn’t be mutually exclusive.

There’s just one problem with this: the refusal of NFL owners to give Colin Kaepernick a job isn’t oppressing speech, it’s oppressing stupidity.  From promoting a murderous dictator to blithely denouncing the American flag as a symbol of racism, Kaepernick has shown a level of depth and nuance that would be embarrassing for a Berkeley protester, more or less a grown man and supposed leader of both a team and a cause.

After his initial protest sparked a significant backlash (and a reminder that the American flag represents a lot more than the Ferguson Police Department), Kaepernick was approached by a fellow NFL player and former Green Beret and agreed to modify his protest.  He would now join his teammates along the sideline during the anthem but remain kneeling while doing so.

It was still a divisive move, but the change at least showed some willingness to adjust his behavior to strike a better balance between expressing his beliefs and remaining respectful.

Yet it was too late – something had already changed in Kaepernick, and he had doubled-down on his initial protest by wearing a Fidel Castro t-shirt to a press conference.  He apparently preferred the type of leadership that would have murdered the entire city of Ferguson – as many as seven times over – and happily jails people like Kaepernick for criticizing those in power.

When later asked about the shirt, Kaepernick continued his profile in courage by complimenting Cuba’s literacy rate, which presumably makes it easier to write letters while a political prisoner.

Despite all of this, Kaepernick was promoted to starting quarterback, starting 11 games for the San Francisco 49ers and playing fairly well.  He even had the option to stay, but he gave up that guaranteed spot to hit the market as a free agent.

He remained unsigned three months later when, on the first anniversary of the shooting of Philando Castile, he compared police officers to the slave patrols of the pre-Civil War era.  The shooting of Castile was outrageous, but by smearing the entirety of law enforcement and invoking the horrors of slavery, Kaepernick reminded everyone of how he combines a need to speak on these issues with the total inability to do so well:

A system that perpetually condones the killing of people, without consequence, doesn’t need to be revised, it needs to be dismantled! pic.twitter.com/BVVPVZIQyD

Kaepernick has not shown any meaningful growth since his statements last year, but with the NFL season about to begin and his obvious talent on the football field, his name continues to come up any time there is a job opening.  A recent potential landing spot was the Baltimore Ravens, whose starting quarterback is sidelined with back pain.

Baltimore was rocked by riots in 2015 after local resident Freddie Gray died in police custody, and the city was likely to be more understanding of Kaepernick’s radicalism than most NFL locations.  The franchise issued a series of thoughtful and transparent statements about the issue and allowed its players to do so as well.

So how does Kaepernick’s side respond?  With a tweet from his girlfriend comparing Ravens owner Steve Biscotti to a slaveholder:

Not because you are angry about racism and police violence, but because you are too lazy to focus your anger on those who actually are racist or violent instead of everyone who passingly resembles them.

Not because you are demanding respect, but because you are incapable of showing respect to those essential to your chosen profession: the owners who take the financial risk, the police who protect the stadium at every game, and the fans whose hard-earned money pays the salaries.

America certainly has problems, and we struggle with balancing the need to support the police officers who do a dangerous job and still hold them accountable when they use unnecessary force.  But just as every NFL player doesn’t deserve to be smeared when a small number have domestic violence or other issues, every police officer in America – and person in America – doesn’t deserve to be insulted for our nation’s continued struggle on issues of race.

If Colin Kaepernick, and those close to him, want to continue behaving this way, he is certainly entitled to do so.  You are guaranteed the right to speak your mind in this country, even when insulting people.  But you are not entitled to be paid millions by those you insult.