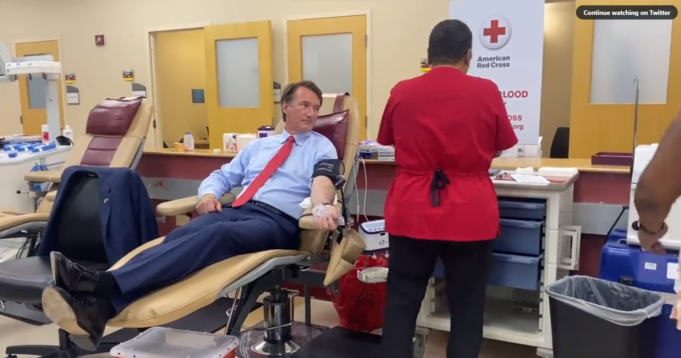 As the American Red Cross locations across Virginia have reported a drop in blood donations, Governor Youngkin has stepped up and donated blood himself.

As reported by CBS Richmond, Governor Glenn Youngkin (R – Virginia) visited the Emerywood Donation Center in Henrico County on Monday to give blood and encourage Virginians to do this same.

“We have a real challenge right now. We’ve got a shortage of blood and plasma all over the nation and particularly here in Virginia. We’ve seen, almost, in every region 12-20% shortages,” Gov. Youngkin said.

Jonathan McNamara, with the Red Cross Virginia Region, said a decline in blood donations during the summer months can be expected, as regular donors may be traveling. Extreme heat also could deter donors from coming to their donation appointment.

As blood donations decline, McNamara said the organization worries if trauma or cancer patients may have to wait for treatment, due to lack of supply.

“When we start to see this reduction in turnout at our drives, which has now been the case over the past few weeks, that’s when we have a responsibility as an organization to go to the public, remind them while donation and to let them know where supply stands,” he said.

Youngkin said planned to do more to recruit and retain nurses and medical staff.

“We’re on a path to normalcy, and that path to normalcy will require continued effort from our healthcare resources. We’ve been so well served by the health system across the commonwealth of Virginia, and I hope that we can continue to recruit these heroes to serve us,” Governor Youngkin said.

This is not the first time Governor Youngkin has donated blood to raise awareness. Back in December, before he was officially elected, the then governor-elect teamed up with other state officials to help combat what the American Red Cross called the “dangerously low,” current supply, which is more than they’ve seen in the last ten years.

To find locations where you can donate blood, click here, and follow Youngkin’s lead to help those in need.