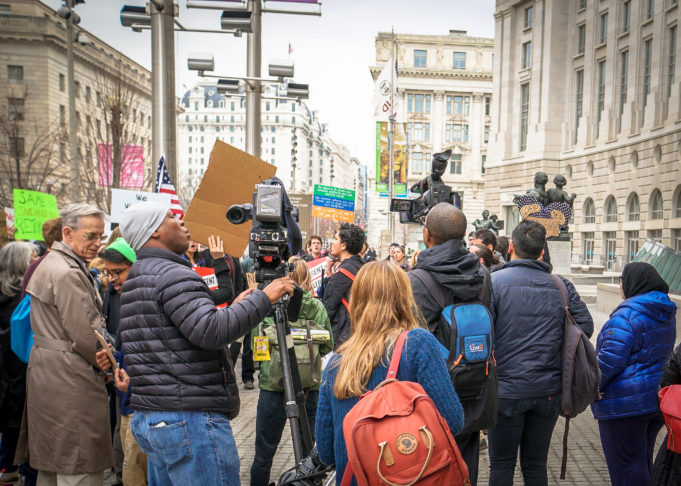 “Federal law prohibits picketing the home of a judge with the aim to influence the judge’s decision making process,” Youngkin and Hogan wrote, arguing that the protests are an effort to influence justices to change their minds after a draft opinion showed the Court was on the brink of reversing Roe v. Wade.

On Fox News Youngkin said, “I just asked the Attorney General to enforce the law that’s on the books.”

He said, “Clearly these demonstrations are being pulled together to try to influence the final outcome, and that is prohibited based on federal statute.”

The Virginia Star asked U.S. Attorney for the Eastern District of Virginia Jessica Aber’s office if that code section was applicable and if Aber intended to prosecute protesters.

“We are aware of the situation and in close contact with our relevant law enforcement partners on the matter,” Public Affairs Director Karolina Foote replied.

The code section bans picketing or parading near a court building, or near a residence or building occupied by a judge, juror, witness, or court officer, if the intent is to influence those people in discharging their duty. The law includes a potential fine or imprisonment for up to a year.

Hans von Spakovsky, senior legal fellow at conservative think tank The Heritage Foundation, told The Star that although there are some First Amendment concerns over the statute, he thinks Garland should enforce the statute.

“I don’t think it is a problem when people protest at the Supreme Court because it’s different. You know, it’s a big building, they’re way outside their security there. That’s not in any way going to intimidate a justice, but showing up at their home where their families live, where their children are, the only purpose of that is intimidation,” he said.

He said that prosecutors, including federal prosecutors like Aber, frequently exercise discretion over what cases to pursue. That protects protesters at the Supreme Court, von Spakovsky said, and it’s also how they can justify not prosecuting protesters at justices’ homes. He said that Garland won’t prosecute those cases.

“It’s a political decision. It has nothing to do with what they should be doing,” von Spakovsky said.

Virginia also has its own legal statute which more explicitly addresses protests outside residences, and Republicans have criticized Fairfax Commonwealth’s Attorney Steve Descano for not enforcing that law.

“He’s also someone who, just like Merrick Garland, is neglecting to enforce the law,” von Spakovsky said.