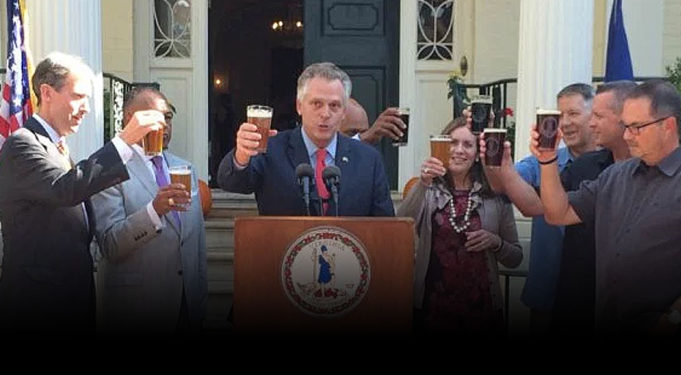 When you’re one of the few remaining Democrat Governors left in America, not much is demanded of you.  You don’t have to be brilliant or sage to get attention.  Breathing is required to be quotable, and not much else.

Even with a low bar set for Virginia Governor Terry McAuliffe, he has a hard time reaching it.

Democrats don’t make things easy for themselves, since they hold so many positions that contradict themselves (they oppose censorship but want statues removed, they want mothers to choose abortions but not schools, they were for James Comey before they were against him).

And I’m not even talking about McAuliffe’s flip flip on confederate memorials that he wanted to protect a couple years ago and now he wants to lead the censorship brigade.

McAuliffe ran to the cameras (CNN’s of course) to attack the President for pardoning Sheriff Joe Arpaio, and the reason he gave for opposing the pardon was “it is a time for reconciliation.”

Let me get this straight.  Isn’t a “time for reconciliation” the perfect time to issue a pardon?

McAuliffe said he agreed with Sen. Chuck Schumer (the first sign of senility) when the New Yorker said Trump issued the pardon because of the hurricane in Texas.

Yes, I know House Speaker Ryan, Sen. McCain and Sen. Flake didn’t like the pardon, either.

But back to T-Mac.

Not much reconciliation coming from McAuliffe.

Oh, and Gov. McAuliffe suddenly says he supports “the rule of law” –  a pretty big change from when the Virginia Supreme Court stopped him from unconstitutionally giving over 200,000 felons the right to vote for Hillary Clinton.  How was that respecting the rule of law?

Maybe allowing people to enter the country illegally undermines the rule of law, too.

Of course CNN’s Jake Tapper asked McAuliffe if he was running for President and T-Mac took 2 minutes saying he wasn’t focused on that.

Tapper wasn’t buying, and added, “There’s a term in politics ‘Shermanesque’ – a Shermanesque denial, when someone says ‘I will definitely not be President, if asked I will not serve’ exactly.  I think you just gave the antonym to Shermanesque. I think McAuliffe-esque because that sounded like an announcement speech.”