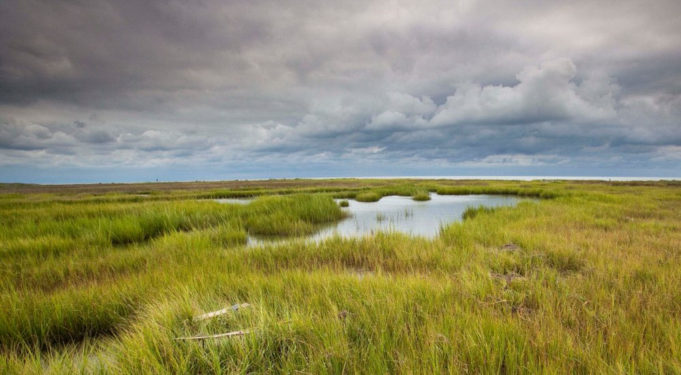 “The menhaden issue predates our terms by decades, but the reality of the Chesapeake Bay is that we have one company in Virginia that is harvesting 100,000,000 pounds of menhaden fish from Virginia waters annually,” Anderson wrote in a Wednesday letter to Governor Glenn Youngkin.

“Reduction fishing of the Bay must stop immediately,” Anderson wrote.

“The industrial fishing industry can fish in the Atlantic the same way they must do in every other state on the east coast and remain in business, but they must be expelled from harvesting menhaden in the Chesapeake Bay which would put us on par with every other Atlantic state who has addressed this issue,” he said.

Omega Protein practices reduction fishing based out of a plant in Reedville, Virginia, where Director of Public Affairs Ben Landry said they’ve been since 1878, although the company has been acquired by a Canadian company. Omega uses a net fishing technique called purse seine fishing where boats deploy nets selectively around a school of fish, and then draw the net in. The term ‘reduction fishing’ comes from the processing of the menhaden fish, which are reduced to fish meal and fish oil for animal and some human consumption.

Omega Protein is the last reduction fishing company on the east coast, and its product is one of the largest exports out of the Port of Virginia, according to Delegate Rob Bloxom (R-Accomack,) who is facing Anderson in the 2023 House primary. Still, Landry said the U.S. share of the commodity is just seven or eight percent of the global market.

But the menhaden fish are also important to the recreational fishing industry because they’re a key food source for the prized Atlantic striped bass and other fish. That’s led the fishing charter industry to lobby for limits and bans on menhaden reduction fishing in the Chesapeake Bay, including in a letter signed by the American Sportfishing Association alongside a number of other associations in June.

“Over the past decade, recreational fishing and boating organizations, coastal businesses, and hundreds of thousands of individual anglers and conservationists have called on decisionmakers to leave enough menhaden in the water to feed the wildlife that support vibrant recreational fishing, boating and other industries that boost Virginia’s coastal economy. Governor Youngkin, we urge you to use your authority to move menhaden reduction fishing out of the Bay until science demonstrates that menhaden fishing can be allowed without negatively affecting the broader Bay ecosystem,” the groups wrote.

Anderson is also worried about the impact of having dead fish on beaches.

“Tourists did not come to Virginia to swim in the water with dead menhaden and the ‘accidents’ are now ‘routine costs of doing business,’” Anderson wrote.

Omega Protein did take responsibility for the July 5 fish spill, promptly notified Bloxom, and went to work removing the dead fish from the beach the next day, although they weren’t required to, Bloxom told The Virginia Star.

The Eastern Shore Post reports that residents first saw dead fish washing up on the beach before July 5, but Landry told The Post that Omega didn’t have any vessels operating between July 2-4.

Landry and Bloxom told The Star that dead menhaden fish also come from other sources.

Anderson and Bloxom were paired in the new House District 100, setting up a primary battle between the two legislators in 2023. The issue affects tourism, exports at the Port of Virginia, and local jobs, making it a volatile issue in Virginia politics. Bloxom says the issue doesn’t fall along party lines, and legislators in more western parts of Virginia are tired of the issue.

Omega exceeded its quota in 2019, according to The Daily Press. In 2020, legislators led by Delegate Barry Knight (R-Virginia Beach) placed the authority to regulate the amount of menhaden fish caught under the Virginia Marine Resources Commission (VMRC), a move that was supported by recreational fishermen and environmentalists and opposed by Bloxom. VMRC imposed a lower cap.

“‘We’ll send letters and ask the Governor to do it.’ And I’m just looking at it  going, ‘No, the data doesn’t show any of this.’”

Omega has frequently donated to legislators from both parties in moderate amounts, including Bloxom, who has received $3,500 from the company in six donations since 2014. In 2022 so far, the company has given $29,750 to candidates, including $25,000 to Youngkin’s inaugural committee. The company also employs the lobbying firm McGuire Woods in Richmond, according to the Virginia Public Access Project.

Anderson published the letter on his Facebook page, and said, “Moving this issue to VMRC may have got the feds off of Virginia’s back, but the reality is reduction fishing is illegal in every other state on the east coast. The only way to guarantee there won’t be more fish spills in the Bay is to eliminate reduction fishing in the Bay. There is no other way VMRC can guarantee a fish spill will not again happen. I hope Senator Lewis joins my call to Governor Youngkin for a moratorium of reduction fishing in the Bay. It’s time politicians stand up against powerful corporate interests and do the right thing.”

Bloxom told The Star, “To say that that money is influencing me is offensive. If you can’t vote against somebody that donates money, you probably shouldn’t have this job.”

Bloxom said that previously opponents to menhaden reduction fishing wanted to require it to be done in the ocean.

“Eventually, it becomes kind of the beginning of the end for that 140-year-old plant. We’ve already reduced our fleet size about 14 percent in the last 12 years because of regulation. At no point has it ever been a lack of available fish. It’s always regulation,” Landry said.

Landry said that limiting Omega to the ocean would impact about 75 percent of jobs largely held by black workers.

“We’re doing our best to hold on and this will be a significant blow if you cannot harvest fish in the Chesapeake Bay,” he said.

Not Enough Data to Determine if Menhaden Overfished in the Bay

A central problem is that the Atlantic striped bass population in the bay is decreasing; Landry says that’s due to overfishing by recreational fishers, but they say that’s caused by declining menhaden populations in the Bay, a key food source. Assessments of the Atlantic menhaden along the entire eastern seaboard show that the population is not overfished, but there isn’t enough data to determine if overfishing is a problem for the local Bay population of menhaden, which are migratory.

“We can tell you on the coast itself that the stock is not overfished and that overfishing is not occurring,” said Toni Kerns, fisheries policy director for the Atlantic States Marine Fisheries Commission, a multi-state commission that sets quotas for each state, including the VMRC, to allocate to local commerce.

“There are no studies that say the stock is being overfished in just the bay, because we don’t have a data set that’s for just the Bay,” she said.

“I would say that we don’t have any clear indication if the stock that’s in the bay is suffering or not, because we do not have the data to indicate that or not,” she said.

Chesapeake Bay Foundation Senior Scientist Chris Moore said the lack of data is hindering decision-making on whether current quotas are adequate to protect the Bay menhaden or if measures like a complete reduction fishing ban in the Bay are necessary.

“A couple of years ago, we advocated very strongly to reduce the cap to what it is now, which is 2,000 metric tons. We also are lobbying organizations to do the science necessary to ensure that we have the appropriate limits within the Chesapeake Bay,” Moore said.

“But we haven’t been able to secure the funding to do that type of science yet. And so, you know, think of the current Chesapeake Bay cap as somewhat of a placeholder until we can determine what is the appropriate amount,” he said.