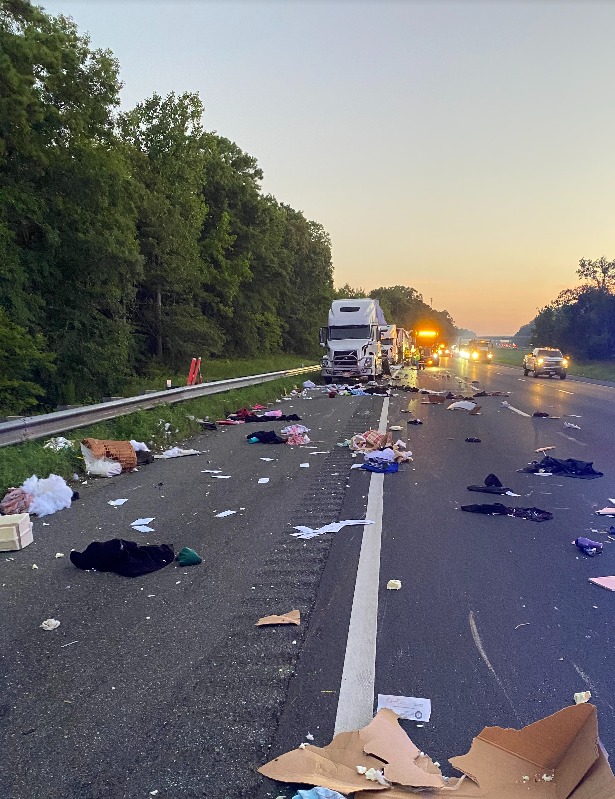 Drivers on I-95 had to take special care yesterday, as a tractor-trailer carrying watermelons crashed with a box truck, causing a ‘large debris field’ all along the interstate.

A crash involving a tractor-trailer carrying watermelons and a box truck caused debris to be strewn across Interstate 95 in Caroline County Monday morning, closing a section of the interstate, according to the Virginia Department of Transportation.

VDOT said I-95 south was closed at mile marker 115 for the crash, which involved a tractor-trailer carrying the large fruit, and a box truck. The crash occurred around 6 a.m. and traffic remained impacted throughout the morning. As of 10:30 a.m. traffic backups were at around two miles.

“I-95 southbound traffic is being diverted at exit 118 (Thornburg) to Route 606 (Mudd Tavern Road), where travelers can access Route 1 southbound to detour around the incident, and re-enter the interstate south of the crash,” VDOT said in a release.

According to WRIC, after a few hours, all southbound lanes were eventually reopened, however VDOT cautioned drivers to stay alert to crews continuing debris removal on the right shoulder.

I-95 SOUTHBOUND: #FinalUpdate All southbound lanes are now open at mm 115 in Caroline. Watch for crews continuing to clean up remaining debris along the right shoulder.