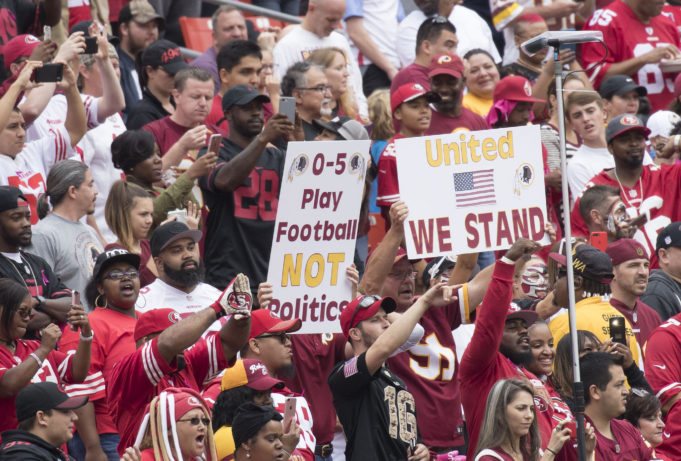 On Wednesday, NFL owners unanimously approved a new “National Anthem policy” that requires players to stand if they are on the field during the performance. Though, the policy also gives players the option to remain in the locker room for the duration of the National Anthem if they choose.

The new policy will fine teams if a player or any other team personnel on the field do not “show respect” for the anthem. This, according to ESPN, includes any attempt to sit or kneel during the National Anthem. It is unclear, however, what the definition of an act of respect is.

Furthermore, teams will have the option to fine players or team personnel for protesting during the National Anthem. For the last two seasons, certain players, spurred on by the actions of former San Francisco 49ers’ quarterback Colin Kaepernick have kneeled during the anthem to show “solidarity” with people who have been victim of racial inequality and police brutality.

During the meeting of the NFL owners, San Francisco 49ers owner Jed York abstained from voting on the policy. Also, New York Jets CEO Chris Johnson says the team will not discourage its players from kneeling during the national anthem despite the NFL’s new policy.

“We want people to be respectful of the national anthem,” commissioner Roger Goodell said. “We want people to stand – that’s all personnel – and make sure they treat this moment in a respectful fashion. That’s something we think we owe. [But] we were also very sensitive to give players choices.”

Goodell also wanted to make sure that he attempted to eliminated criticism that suggested the protests were unpatriotic.

“It was unfortunate that on-field protests created a false perception among many that thousands of NFL players were unpatriotic,” Goodell said. “This is not and was never the case.”

But, let’s get down to brass tax here…This new rule has nothing to do with patriotism, or the National Anthem, or honoring the military, or social issues – it’s about money. It always was and it always will be.

If this whole thing wasn’t about money and actually about honoring a country, every player, team employee, including the men and women working the ticket booths and cooking hot dogs, would be forced to “stand and respect the flag and anthem” as players will be required to do under the new policy.

NFL ratings were by at least 10 percent last year and that causes the big-wigs to discuss what really matters – their livelihood.