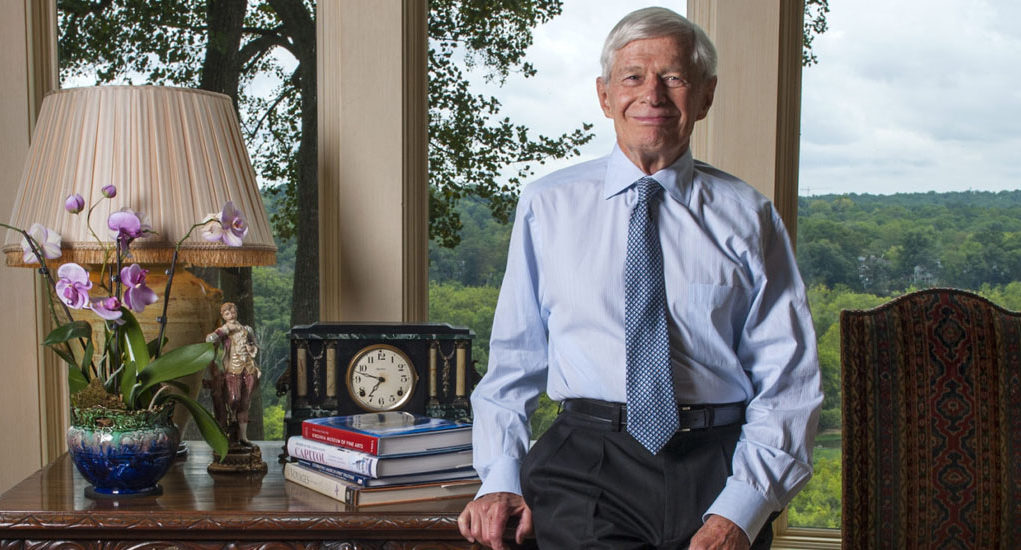 Choose the harder right instead of the easier wrong.

My first time meeting Fred Malek was in 2007 at a Republican Party of Virginia fundraiser with then-chairman Ed Gillespie.  One of the first and most instant impressions of the man was his gift for cultivating excellence and recognizing it in others — or better still, sparking in others the excellence they never knew they had.

That was the sort of leader Fred Malek was to those who had the privilege of knowing him.  Duty, integrity, character — these were the things that impressed you about Malek, and they defined not only his career but those whom he surrounded himself with and counted upon as friends, associates, business partners and allies.

Fred Malek passed away on March 24 in McLean, Virginia leaving behind his wife, two children and five grandchildren.  Though the Washington Post’s Harrison Smith offered an obituary, his was little more than a contemptible partisan screed no man deserves (and in total violation of the maxim de mortuis nihil nisi bonum — once again proving that honor is invisible to those who have none).

Among those privileged enough to know him, Fred Malek defined the word honor.  Malek was recognized not only by the Anti-Defamation League with their Achievement Award in support of the Jewish people, but also as a member of the Horatio Alger Association.  Malek served proudly as president of the American Friends of the Czech Republic, as his parents were from Czech descent and witnessed first hand the terror that a truly realized socialist state could hold over a people.

As a business leader, Malek career spanned five decades and included some of the biggest names in the global marketplace.  As president of the Marriott Corporation, Malek spearheaded the acquisition of the Ritz-Carlton Hotel Company.  As a senior advisor to the Carlyle Group, Malek co-led the acquisition of the Coldwell Banker Commercial Group.  Malek helped buy Northwest Airlines at one point, eventually serving as its president.  Malek even helped co-founded and served as chairman of Thayer Lodging, a private equity firm with over $3 billion in hotel assets worldwide.

Not bad for the son of immigrants.

Malek’s academic career began at the United States Military Academy in West Point which was quickly followed up at Harvard Business School, where he went on to serve in the U.S. Army as a Ranger attached to a Green Beret division.  This education forged more than just a philanthropic spirit, but a dedication to excellence that united to form the bedrock that not only defined several landmarks at the USMA — Army soccer’s Malek Stadium and the Malek Tennis Center — but also added significantly to the USMA’s endowment by heading up the largest capital campaign in West Point’s history.

His gifts were not simply extended to West Point.  Marymount University in northern Virginia renamed its School of Health Professionals in honor of the Malek family. The Aspen Institute — long known for its conservative advocacy — also enjoyed their patronage, as did the University of Texas, Ford’s Theater, the Kennedy Center, the National Museum of Women in the Arts, Vital Voices Global Partnership, and the Woodrow Wilson International Center.

Malek’s acumen and his ability to perceive a good thing straight through would only naturally seek political supplicants.  Thus did Malek throw his energies into Republican politics, serving as chairman of the Republican Governor’s Association (RGA) during a time where Republican governors were scarce.  Malek’s service transformed an association into a respected political force, one of the longest-lasting political legacies that will define the next 50 years in American politics.

Yet Malek’s activism didn’t stop there.  Malek kickstarted and chaired the American Action Network as well as the American Action Forum.  Free enterprise wasn’t something he merely believed in as a vehicle for his own success; Malek saw it as the single greatest gift one could give themselves, because without that spirit of entrepreneurship and excellence, without that global optimism that within every human being lies a spark of genius, the idea of America becomes counterfeit and incomplete.

Complacency was something Malek refused to countenance, not only in the world but among his friendships and associates.  Find what you do and do it well, and when you do choose what is right over what is expedient — and stick through it, because excellence is called precisely that because it forces us to excel.

This was the spirit of American capitalism that Fred Malek embraced, not just in its tangible results, but far more importantly its character of generosity, excellence, and humility.  When those virtues were challenged, Malek always rose beyond the challenge, and it was those challenges early in his career during the Nixon Administration that excavated the character of the man.  In Malek’s own words as he accepted the ADL Achievement Award from the Anti-Defamation League:

All my adult life, I’ve used as my personal and ethical code the motto of my alma matter, West Point. It is three simple words that have a most profound meaning: “Duty, honor, country.” There is no greater honor that can be shown to our country than defending the ideals of democracy, protecting civil rights, and ending bigotry, and no greater duty for all of us. I am honored to be in your company. Thank you again.

Malek was not a household name; his virtues were undoubtedly American ones. One always knew exactly where they stood.  Malek exemplified his own code of honor, treated people with unmatched kindness, and conducted himself with unimpeachable integrity as he reminded others of the West Point Cadet’s Prayer — urging others to “choose the harder right instead of the easier wrong.”

That is the Fred Malek the world deserves to remember.  Surely the world is producing few and few men of his strength of character today.