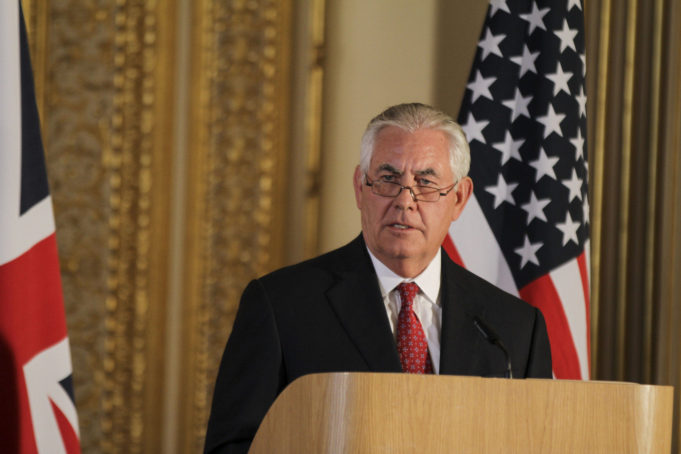 On Monday, the rebel-controlled community of Eastern Ghouta was attacked by Syrian government forces with chlorine gas during an continual onslaught from President Bashar al-Assad. According to a report from Reuters, U.S. Secretary of State Rex Tillerson stated during an international conference in Paris on chemical weapons, “Only yesterday more than 20 civilians, mostly children, were victims of an apparent chlorine gas attack.”

The Assad Regime has denied using chemical weapons, after agreeing to destroy them under 2013 terms brokered by Russia and the U.S. “The recent attacks in Eastern Ghouta raise serious concerns that Bashar al-Assad may be continuing to use chemical weapons against his own people,” said Tillerson. Eastern Ghouta, near Damascus, is the last major rebel-controlled area in the country where over 390,000 civilians have been assaulted during the nation’s four-year-long civil war.

Secretary of State Tillerson also called to Vladmir Putin’s government as the main instigator of the bombardment. “Russia ultimately bears responsibility for the victims in Eastern Ghouta and countless other Syrians targeted with chemical weapons since Russia became involved in Syria,” said Tillerson. Assad is closely allied with the Russian Federation and receives materiel support to fight against rebel groups attempting to overthrow the genocidal regime. The Syrian leader is also diplomatically protected by Russian officials through the United Nations Security Council, a point which the Secretary of State is working to prevent.

Tillerson spoke against the Russian government on Tuesday and against leader Putin regarding its involvement with the chemical attack on Eastern Ghouta. International investigations have taken place consistently in the country regarding the attacks Assad is carrying out on his own countrymen.

Recently, the United Nations and the Organization for the Prohibition of Chemical Weapons investigated an attack by Assad’s government on April 4, 2017 and found that the highly-toxic nerve agent sarin was used, as well as weaponized chlorine gas. “There is simply no denying that Russia, by shielding its Syrian ally, has breached its commitments to the United States as a framework guarantor,” Tillerson added in his speech.

In Paris, Tillerson adamantly blamed Putin as a direct actor in the attack saying, “Russia’s failure to resolve the chemical weapons issue in Syria calls into question its relevance to the resolution of the overall crisis.” At the meeting, 24 countries agreed to terms to work together to target the sources of the chemical weapons attacks and to impose crippling sanctions on foreign governments.