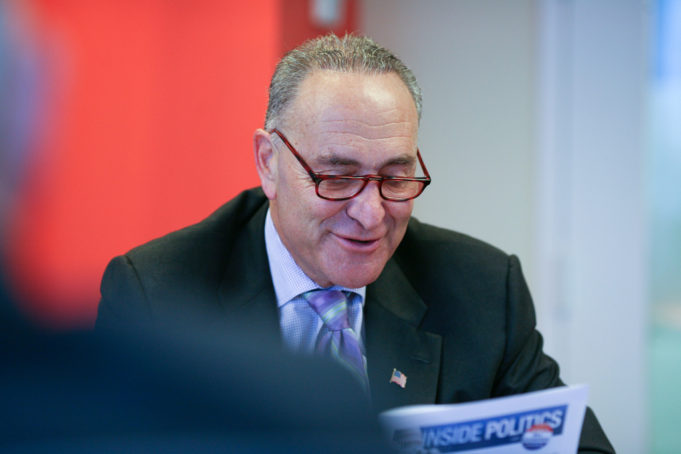 ﻿According to a report from Politico, the “spending boost” for President Donald Trump’s border wall with Mexico has just been revoked by Senate Minority Leader Chuck Schumer (D-NY). Interesting, considering Schumer is adamantly against anything of the sorts.

On Monday, it was reported that the White House was informed of the decision through an aide of Schumer that he had retracted his “generous” offer of more than the $1.6 billion Trump asked for this year for the construction of the wall. The Democrats now claim President Trump, “will simply not get a better deal than that on his signature campaign promise.” However, there was never an offer in the first place.

The items discussed during a closed-door “cheeseburger summit” between both Schumer and President Trump have come into question. The Weekly Standard claims this is a point of disagreement between Republicans and Democrats. As reported, Schumer “discussed the possibility of fully funding” the southern border wall. Now, however, the Trump Administration disputes the senator’s use of the word “fully” and the notion of the $1.6 billion for a “down payment” of the wall.

Regardless of the total amount talked about or decided on during the meeting, did Schumer agree on a proposal for the wall in reference to the amount of funds allotted for the project, or did he actually commit to disbursing the funds to begin construction? “This is the difference between ‘authorizing’ money and ‘appropriating’ it,” the report explains.

Congress authorizes a spending bill before its actually appropriated to begin funding projects. Therefore, for the border wall, there would be legislation proposed to authorize funds – setting provisions for construction and indicating the amount of money that will be appropriated in the subsequent bill. Then, Congress would vote to appropriate those funds in accordance with the previous legislation.

Mick Mulvaney, Director of the Office of Management and Budget, has said, “There was already authorization to build a wall on the southern border that Chuck Schumer voted for in 2006. It hasn’t been built because the money was never appropriated, it was never funded.” In 2007, a piece of legislation directed the Department of Homeland Security (DHS) to, “construct reinforced fencing along not less than 700 miles of the southwest border where fencing would be most practical and effective,” at the discretion of the agency, according to Mulvaney, citing the Secure Fence Act of 2006. In its original fashion, the bill authorized Congress to spend $12 million to construct the aforementioned border security provisions, but one year later, the dollar amount was changed to, “such sums as may be necessary.”

The current language in the bill does not carry a dollar amount, thus creating the notion that an undefined amount of money can be spent constructing the border wall as deemed necessary by the Trump Administration and DHS. The White House can argue it already has the power to begin construction on a wall. It is not necessary to agree on any additional authorizing language.

Nonetheless, there were three different versions of a border wall and protection bill put forth by both Republicans and Democrats last week. The Republican majority in the House was in favor of terms that would have allowed the federal government to remain open. Even so, if the Democrats had agreed to any of the terms, there never would have been a shutdown in the first place.

Senator Dick Durban (D-IL) stated, “He [Schumer] called the White House yesterday and said it’s over.” What is over?

On Friday, after Democrats in the House and Senate rejected spending bill from the Republicans, which included a six-year funding measure for CHIP, the 69-hour government shutdown began. House Minority Whip Steny Hoyer (MD-5) moved to adjourn the House at noon on Friday, indicating that Democrats refuse to work with their conservative counterparts and wanted to utilize a government shutdown to gain a political victory. The shutdown was not over immigration – it was a political ploy from “The Resistance” faction in the Democratic Party. Schumer is not interested in funding a border wall, which he absolute opposes, for a president he will not work with to craft a spending bill. He used the authorization versus appropriation jargon to ensure an argument.

The federal government will remain open until February 8, via a three-week stopgap spending bill signed by the Senate and House last night, which was agreed on by the president late last night. The bill was put worth after an agreement was made that Republicans must take up a vote on DACA immediately, barring another shutdown. It is unclear if the senator from New York will allow a second “Schumer Shutdown.” Though, from the vicious opposition from fellow liberal House Minority Leader Nancy Pelosi (D-12), Schumer may have to endure an additional “sellout.” On Monday, Pelosi verbally slammed Schumer for his willingness to re-open the government.

After all this, it seems the Democratic Party is not as homogeneous as once thought.