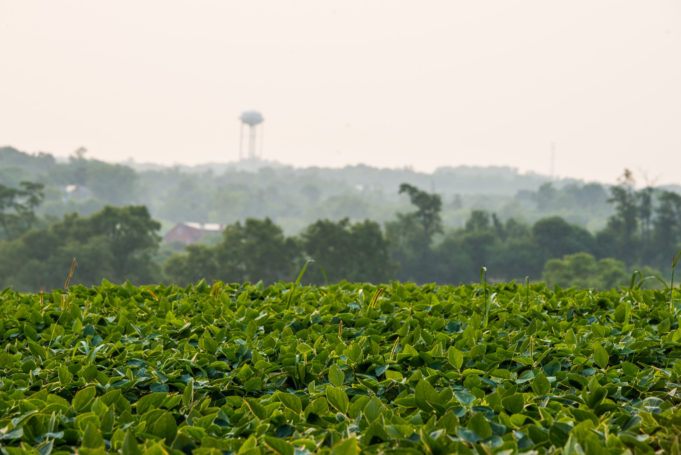 Soybean farmers in Central Virginia are sweating the Trump Administration’s tariffs as China may cease buying the beans if Beijing follows through with its threats to counter the U.S. proposal with its own duties on American goods. After President Trump announced a potential $60 billion in duties on Chinese goods over nefarious trade practices, the Asian nation hit back with a proposed $50 billion in tariffs, causing a “tit-for-tat” trade war.

“Seventy-five percent of what we grow is soybeans,” said Prince George County Extension Agent Scott Ryder. “In just Prince George, we would lose $1.1 million if this tariff goes through.”

Currently, Dinwiddie County produces 553,000 bushels of soybeans per year, with neighboring Prince George County producing 437,000 bushels, annually, according to a report from The Progress-Index. With agriculture being Virginia’s largest private industry, the new tariffs could have a detrimental impact on the Commonwealth’s economy as soybeans were the state’s top agricultural export in 2017.

Last month, the Chinese government threatened to impose a 25 percent tariff on over 100 imported products from the U.S., 33 of which are farm-related. Their list also includes tobacco products, corn, cotton, beef, and whiskey.

“If we export $1 worth of soybeans to China, they would cost the people importing them $1.25,” said Elaine Lidholm, communications director for the Virginia Department of Agriculture and Consumer Sciences. Therefore, buying soybeans and other products from the U.S. would become expensive, causing one of the world’s biggest buyers of Virginia produce to look elsewhere.

China’s 25 percent tariff on American soybeans would make producers from Argentina and Brazil the cheaper options in the global market as the U.S. becomes less economically attractive.

“What we’re concerned about – and not just in Virginia but around the country – is that in all likelihood China would replace Virginia products with products from other countries because they could enter the country at a lower rate,” said Lidholm. “It could kill business.”

China has not yet set a date to implement its new tariffs, explaining that it depends on when the U.S. will impose its tariffs. Officials from the Trump Administration are scheduled to fly to Beijing later this week to negotiate with Chinese government officials about the duties.

A report from Business Insider claims that over 1,100 leading economists sent a letter to President Trump, urging him to reverse the trade tactics. Organized by the conservative-leaning National Taxpayers Union, the letter cites a 1930 address to Congress that opposed the Smoot-Hawley Act, a large package of tariffs that many studies claim as a major reason for the depth of the Great Depression.

“Congress did not take economists’ advice in 1930, and Americans across the country paid the price,” the letter stated. “The undersigned economists and teachers of economics strongly urge you not to repeat that mistake. Much has changed since 1930 – for example, trade is now significantly more important to our economy – but the fundamental economic principles as explained at the time have not.”

14 Nobel laureates, the former chairs of the Council of Economic Advisers under Presidents Barack Obama, George W. Bush, and Bill Clinton, and economists from across the political spectrum are noted in the letter.

Designed as a protection measure for U.S. industries, the 1930 tariffs from President Herbert Hoover actually deepened the Depression and subsequently split the economic relationships of Western nations apart. The original letter states, “A tariff war does not furnish good soil for the growth of world peace.”

As America crawled out of the years-long economic downfall, the congressional letter aided the justification of the lifting of the tariffs and allowed for business to be bolstered back to normal.