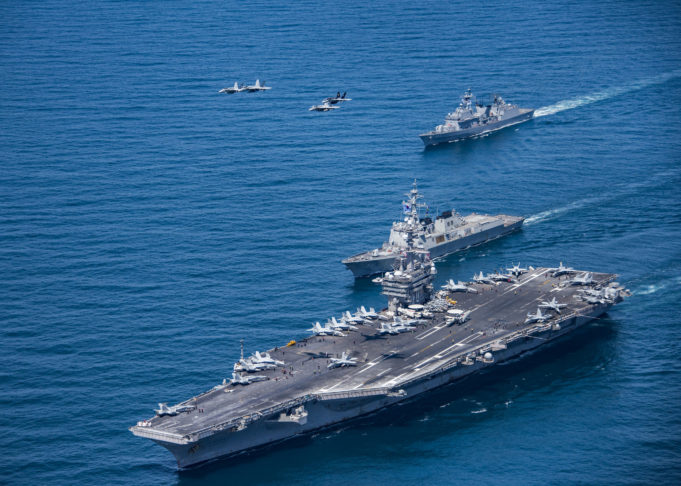 The largest military ship-building contractor in the U.S. says this is, “the most exciting time I’ve seen in my 30-plus years,” as a boom in Navy contracts is set to dictate the course of business over the next decade. Mike Petters, president and CEO of Huntington Ingalls Industries (HII), said the new contracts would span its Newport News and Gulf Coast shipyards, where the company is investing $1.8 billion to improve its facilities to take on the military’s orders.

According to a report from the Daily Press, Petters’ commentary came during a conference call with Wall Street analysts to discuss the company’s first quarter earnings. HII’s Q1 earnings showed a  profit of $156 million for the first three months of 2018, a 31 percent year-over-year increase.

As one of President Donald Trump’s campaign promises of rebuilding America’s military, the Pentagon is seeking an expansion of the Navy’s fleet, with considerations coming of the purchase of two aircraft carriers, new Virginia-class nuclear-powered submarines, and guided-missile destroyers. Moreover, another large buy is in the works with a set of large Coast Guard cutter ships and new versions of the San Antonio-class amphibious ships.

By the end of March, HII has produced 25 Navy ships already under contract. By the end of 2020, the contractor could see an award of base contracts or improved options on existing Navy contracts for an additional 20 to 30 ships.

“This new work supports our sales outlook for the next five years and forms the foundation that will support the business for the next 10 to 15 years,” Petters said.

The Navy is set to expand its sea-faring fleet from around 280 current ships to 355. Although Petters said he is not focused on the top-line number as much as the Navy’s plan to get there, he cited the consideration by the Navy of a two-carrier purchase as a big business advancement.

That proposal from earlier this year, “is the biggest signal that the Navy could have sent to the entire supply chain that we are serious about this ramp-up in the size of the Navy,” he said.

A final decision on a two-carrier purchase is expected later this year, following the decision for the new submarines which contractors are set to begin constructing in 2021, with a deadline of 2031. It would also cover the future USS Enterprise, the third Gerald R. Ford-class carrier now undergoing advance work at Newport News, and the fourth, yet-to-be-named ship.

Newport News is home to 20,000 of the 38,000 HII employees, with the company being Virginia’s largest industrial employer.

In the first financial quarter, a construction contract for a new amphibious transport dock ship added to the total $2.6 billion in new contracts for the company, which has a backlog of $22 billion in projects.

Nevertheless, Petters said the yard will meet that goal. Newport News, “is pushing to accelerate launch by three months to the fourth quarter of 2019,” he said.