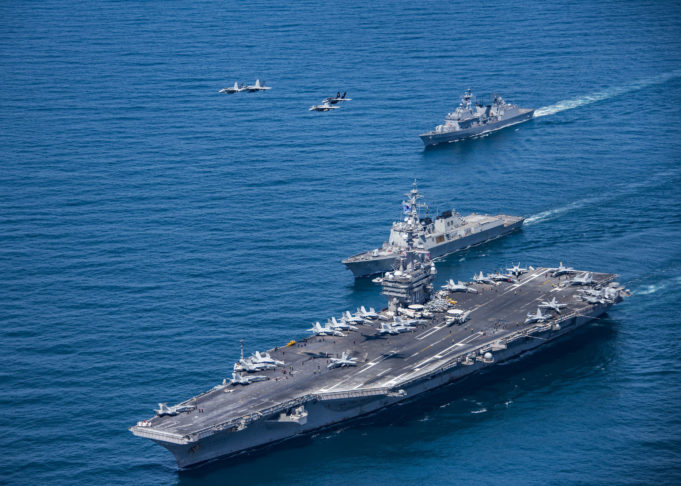 This past weekend saw a massive Chinese naval exercise that virtually surrounded the self-governing island republic of Taiwan, officially known as the Republic of China (ROC). Communist China’s People’s Liberation Army (PLA) and communist state media reported on the major drill some called a “rehearsal of possible real action.”

China’s Global Times (GT), a mouthpiece for the Chinese Communist Party (CCP) provided the most details on the much-hyped drill when it reported that:

The Chinese People’s Liberation Army (PLA) recently held a large-scale joint exercise surrounding the island of Taiwan from both sides, a move that experts said on Monday demonstrated and further boosted the PLA’s high level of combat preparedness over Taiwan and sent a strong warning to “Taiwan independence” secessionist forces and external interference forces at a time when those forces repeatedly made wrong remarks and actions on the Taiwan question.

By featuring a powerful aircraft carrier group east of the island, a large number of different types of warplanes and additional warships west of the island, plus conventional missiles, the PLA exercise was a partial rehearsal of a possible reunification-by-force operation, including the neutralization of the military potential of secessionist forces on the island and the cutting off of possible military intervention from countries like the US and Japan, analysts said.

In preparation of and a possible real action of military conflict in the Taiwan Straits, all PLA forces will play their roles, as they will surround the entire island, seal it off and launch effective strikes, Song Zhongping, a Chinese mainland military expert and TV commentator, told the Global Times on Monday.

By having the Liaoning aircraft carrier group positioned east of Taiwan, the PLA not only cuts off possible reinforcements from foreign interference forces, but also launches attacks on military bases east of the Taiwan island, and intercepts any escape attempts from secessionist forces, Song said.

Conventional missiles, most likely operated by the PLA Rocket Force, can effectively eradicate key military installations across Taiwan, including air defense systems, radar systems, missile positions, airfields, naval ports and other bases, Song said. Some types of missiles can also be used to deter and deny access of foreign warships to the region, he said.

However, despite all the air and naval forces arrayed against Taiwan during the drill, Song did note the apparent lack of amphibious landings and actions by ground forces during the exercise.

This major invasion drill appears to be a reaction to recent U.S. naval activity near Taiwan, as the American supercarrier, USS Abraham Lincoln (CVN-72) was active near the island nation on May 2.

And shortly after the drill a U.S. Navy Ticonderoga-class guided-missile cruiser, the USS Port Royal (CG-73), transitioned the Taiwan Strait Tuesday, prompting a rebuke from China.