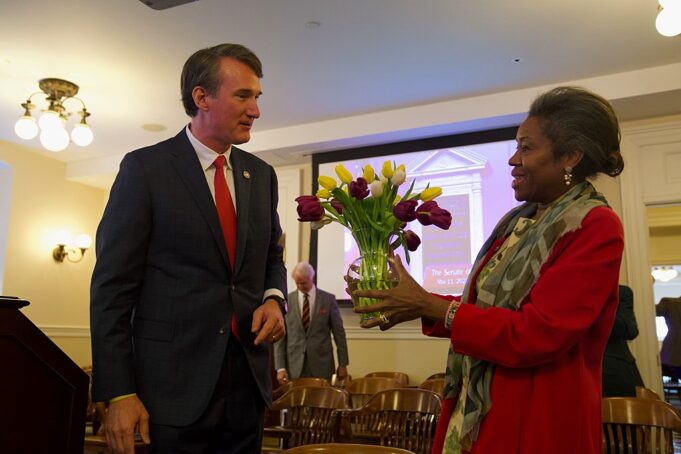 Lt. Gov. Winsome Sears is adding her voice to Virginia Governor Youngkin, Maryland Governor Hogan, and Virginia Attorney General Miyares call for President Biden to do more to protect the Supreme Court Justices during the nationwide protests that have started across the country.

Following the leaked document that indicated that the Supreme Court was planning to overturn Roe v. Wade, many pro-choice activists have begun protesting outside of Justice’s houses, many of whom live in Virginia. Governor Glenn Youngkin, along with Maryland Governor Larry Hogan sent a letter to U.S. Attorney General Merrick Garland citing U.S. code about protests conducted to influence judges. (RELATED: Youngkin, Hogan Ask U.S. Attorney General Merrick Garland to Enforce Federal Law About Protesting in Front of Judge’s Residences; Federal Prosecutor Says, ‘We Are Aware of the Situation’)

“I just asked the Attorney General to enforce the law that’s on the books. Clearly these demonstrations are being pulled together to try to influence the final outcome, and that is prohibited based on federal statute.”

Additionally, Attorney General Jason Miyares also made calls for Hogan to “Do your job”, in regards to helping secure the Justices from the harassment of the protestors. Going on “Fox and Friends”, Miyares tried to urge Garland to take actions to protect the Justices. (RELATED: Miyares Slams Garland on Fox and Friends “Do Your Job”)

“They absolutely should be sitting back and seeing this, being concerned, and they should be having federal agents there when people cross that line. But I think it’s a clear violation of Section 1507. They’re shutting down private residents or shutting down roadways, and they’re trying to intimidate, witness, intimidate Supreme Court justices. Right now, the US Justice Department could step in.”

Now, Virginia Lt. Gov. Winsome Sears has also issued a challenge for Biden to protect these Supreme Court Justices. According to the Daily Wire, Sears shared remarks during an interview on “Fox & Friends” on Thursday, calling out the president for failing to act to ensure their safety.

“President Biden, you need to tell your attorney general to go and do his job and protect the citizens of the United States of America,” Sears said during the interview. “Ultimately, sir, this falls on you. This is on your watch. And it’s all fun and games until somebody gets hurt. And then who is going to write the script for you, Mr. President, so you can read it and say that it was somebody else’s fault?”

Sears spoke out against protesters in a Twitter post on Wednesday, also calling on state officials to take action.

Multiple protests have now occurred since Politico reported a leak of a draft by Justice Samuel Alito that appears to indicate the court could likely overturn Roe v. Wade and return decisions regarding abortion laws to individual states.

On Monday, protesters gathered outside of Alito’s home. It is illegal to try to influence the court’s decision.

"F— you Alito" they screamed.

These protests are technically illegal but, of course, no one was arrested.https://t.co/E4Ge8Fy4mh pic.twitter.com/KQcaJSuncj

The Daily Wire reported on Wednesday on a small group of pro-abortion rights protestors who demonstrated in front of Justice Amy Coney Barrett’s home, prompting criticism from one of the justice’s neighbors.

“They shouldn’t be doing this,” he told The Daily Signal’s Doug Blair, before telling the protestors: “Go home and get a family.”

“It’s none of their business, why are they here?” he asked. The neighbor said that he thinks it is “of course” inappropriate for the protestors, who were dressed as handmaids, to demonstrate in Barrett’s neighborhood.

“They have the right to protest but not in front of someone’s house,” he said. “They live here, this is where she lives.”

So far, no extra action has been taken. Hopefully Sears adder her voice to the cries that these protests may intimidate or influence the Justices results in action that the people want.