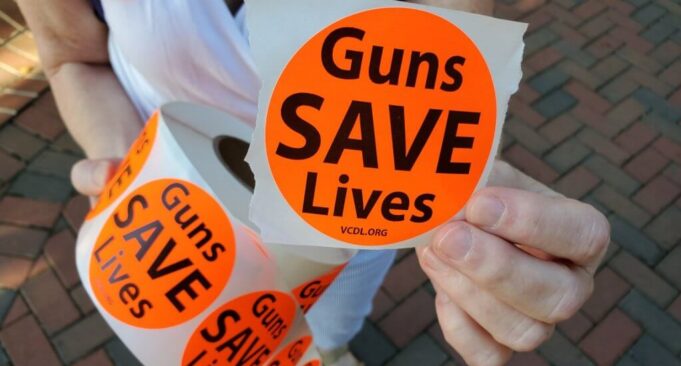 Undermining peaceful pro-2nd Amendment protests has become a hobby for the mainstream media. For the latest example, look to the way reporters are talking about yesterday’s Lobby Day in Richmond — where they intentionally conflated peaceful protesters with white supremacists.

Per annual tradition, passionate Virginians made their way to the Capitol on Monday to voice their support for the right to bear arms — which has fallen increasingly under attack since Democrats assumed power in Richmond.

In recent times, it seems as though both the media and Democrats (essentially one-in-the-same) decide what they will find before they even begin searching. This time, they decided that no matter how peaceful yesterday’s protests were — and they were indeed peaceful — that the story they would run with would depict everyone that showed up as an extremist.

Despite an overwhelmingly tranquil crowd, with most attendees there simply to defend their 2nd Amendment rights, liberal media is making a concerted effort to convince the public the few bad apples among the group represent the entire bunch. The media does this in an effort to undermine a cause they don’t believe in, because in their minds, telling people to ignore extremists is easier than telling people they should not be able to own a firearm to defend themselves.

Democrats and the media know very well the agitators from extremist groups like the Boogaloos and the Proud Boys were few, but they had already determined that yesterday’s protest was going to be a hate-filled fury. So when the largely peaceful crowd did not fit into their predetermined narrative, they had to run with it anyways.

Even worse, they went as far as to misquote responsible leaders, who effectively separated the aggressors from the lawful citizens. Case and point? Kirk Cox.

Likely tired of seeing law-abiding 2nd Amendment supporters get lumped in with the bad apples around them, Cox rightfully called the Boogaloos in attendance what they are: provocateurs. In response to a tweet covering specifically a Boogaloo scrum, Cox said, 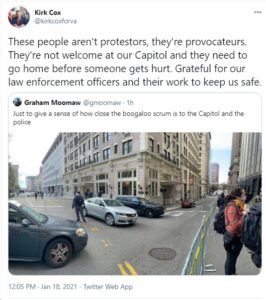 BlueVirginia, the social media mouthpiece of Virginia Democrats, immediately seized Cox’s words and twisted them, trying to convince the public he was referring to all citizens in attendance. Now, liberal media is pulling out all the stops to spin Cox’s tweet directed specifically at extremists, who Democrats demand be condemned daily, into a blanket statement applicable to all pro-gun Virginians. Why would they take Republican words out of context? Because the context doesn’t fit the media’s preferred narrative.

Unfortunately for the mainstream media, their deceit is thinly veiled — and Virginians can spot these lies from a mile away.

Among conservatives, Kirk Cox’s response ought to be more common. Since the Left refuses to differentiate extremist fringe-groups from law-abiding protests, it is up to the Right to do so. After Cox correctly ostracized white supremacists from the peaceful crowd, the media was forced to hit the panic button and do all things possible to misconstrue this Republicans statement.

The media want so badly for the public to believe Cox was making a blanket statement directed at 2A supporters, because they know if conservatives continue to condemn the white supremacists lurking among their ranks, the Republican movement will strengthen its integrity.

This intentional conflation by liberal media isn’t new. They did it last year too, when thousands of inspired Virginians descended upon the Capitol to defend their 2nd Amendment. After a day of peaceful protests, reporters attempted to spin that event into something it was not, and this deception is on display again today, in the twisting of Cox’s words.

However — a parting message to such deceitful news sources: no one is fooled.