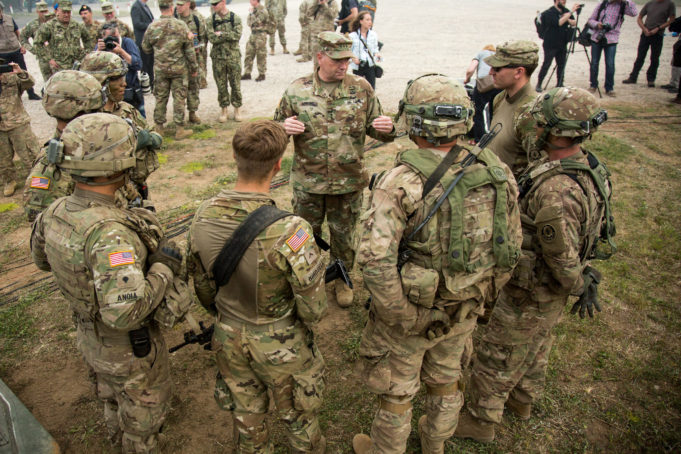 This is a topic I have been engaged in for years. I have discussed it with retired generals and top Pentagon officials, but it rarely gets the attention it deserves.

And going woke is a big reason the Pentagon is suffering an ‘unprecedented’ recruiting crisis.

And I say that as a former Marine Corps officer who graduated from Georgetown University and earned graduate degrees from London and Cambridge universities in the UK.

Elite education is fine, as long as you have the solid intellectual grounding, values and moral strength to resist the indoctrination.

Too many military officers today don’t have that.

As a matter of fact, I recently dropped out of an executive online public policy program at Harvard’s Kennedy School because it was a drain, even on me, being surrounded by woke professors and students, even via Zoom!

To make the case against sending our officers to these civilian schools, Frank Wuco, a retired Naval Intelligence Officer with 23 years of active-duty service, penned an excellent op-ed in Newsweek.

Wuco, who also served as a senior advisor to Team Trump, wrote of our current cadre of military leaders:

Many find it difficult to shake the woke indoctrination of their campus experience. Back on duty in Arlington, officers are wholly dependent upon the approval of their civilian bosses. Uniformed “leaders” in the five-sided building may be physically brave, but too many are moral cowards.

And that is why the current destructive leftist wokeism is able to infect our military.

The military itself birthed this one by building a system that miseducates our officers. Over the course of decades, Pentagon luminaries convinced themselves that non-military education forges better practitioners of the arts and sciences of warfare. So in terms of instruction, military officers are on par with their civil-servant and academic counterparts. You might think that’s fantastic. It’s not. This ruinous and disorienting requirement has left our military leaders as far afield from their war-fighting forebears of the previous centuries as one could possibly imagine.

Our officers are politically and socially indoctrinated right alongside the population that passes through our colleges and universities. We send our officers to Ivy League schools and other elite institutions of “higher learning” to supposedly round out their educations…

Our nation’s official war colleges offer little solace. They seem suicidally determined to out-progressive their rabidly progressive civilian counterparts. Whatever the case, without advanced degrees from these institutions, officers can turn in their resignation letters at the 10-year mark. Their careers will go no further.

Eager to fit in on campus, many officers seek to demonstrate that they are not quite so bad as their civilian colleagues think. They want to be thoughtful and understanding, politically correct in ways that make them less distasteful to their temporary peers. The ideologies they absorb—to be fair, sometimes out of survival—flow back to base, out to sea, onto the field, and straight into the Pentagon, where woke mantras are now fostered, promoted, and enshrined into policy with evangelical zeal.

Recruitment problems are a symptom of the failure to educate and cultivate genuine military leaders. The young and service-ready of our nation still want to stand out as elite guardians of their society against foreign threats and domestic ruin. Unfortunately, if what they are being asked to join is no longer discernible from the disorientation of modern civil society, and they are smart enough to notice, then the question understandably becomes, “what’s the point?”

“Wokeness is a sickness. It’s prevalent. It’s the rule. And it’s destroying our military.” ALD