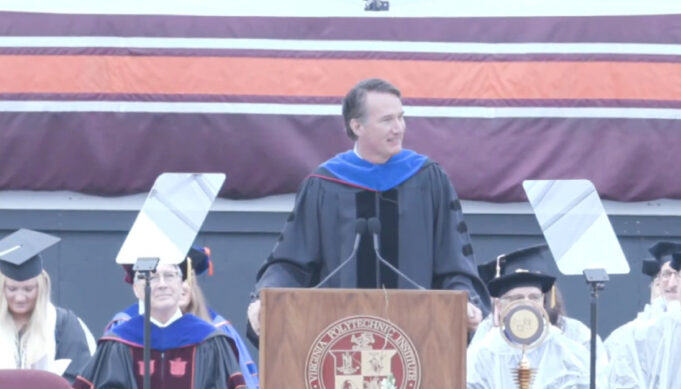 In a commencement speech at Virginia Tech, Governor Glenn Youngkin spoke about the importance of mentors and a moral compass while criticizing “group-think” in higher education. Youngkin is the ninth consecutive Virginia governor to give the school’s commencement address in the first year of his term, according to a March announcement.

“I firmly believe that each of you has been divinely created for a purpose,” Youngkin said in the Friday speech. “If you unlock the mysteries of your gifts, you will unlock your purpose. In society today, there’s such a great emphasis on achieving happiness. Yale University even pioneered a class on finding happiness. But all the great thinkers that I have read, have said, and actually I’ve learned from my own experiences, that happiness is fleeting. It’s finding purpose that’s truly sustaining.”

Youngkin’s speech was similar to one he delivered a week before at Regent University, a private Christian school, although Youngkin didn’t include as many explicitly religious remarks in his Virginia Tech speech. Both speeches included criticism of higher-ed conformity.

The crowd applauded when Youngkin criticized “too much intolerance that rears its head in the form of a cancel-culture at the first hearing of alternative views.”

“Current culture reinforces self-obsession and results in judgement rather than reinforcing shared values, shared values that unite us. It’s the shared values of Virginia Tech that unite all of you today. You go forth as representatives, as ambassadors of this renowned campus, which has trained leaders for generations. Your journey starts here,” he said.