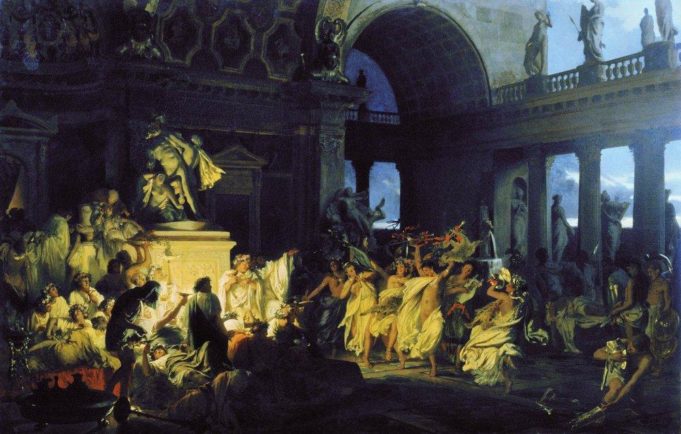 There is so little that distinguishes today’s liberal Christians from the ancient Pagans to whom the gospel was originally preached, they would be more honest in dropping the name “Christian,” and adopting once again the title of Pagan.

Before I continue, the term liberal Christian is used in a theological and moral context, and not necessarily a political one. It comes from the 19th century in which Christians sought to liberate themselves from traditional orthodoxy in favor of a more progressive interpretation of doctrine in a modern world. It is possible for a political liberal to hold orthodox views on Christian theology, but the correlation against shows it is very rare. Furthermore, one can hold conservative political ideology and be very much a “Liberal Christian.”

One of the reasons Christians were so despised in Ancient Pagan Rome was because of their claim to exclusivity in the quest for eternal life. They were actually called atheists because they denied the validity of other (the Romans’) religion’s claims. They were intolerant of the pantheistic ideas Rome held, and were persecuted because of their arrogant claims that Jesus was the only way to eternal life.

Today, religious pluralism is once more in vogue, and to deny the validity of non-Christian claims to salvation – or to affirm the exclusivity of Christian claims to salvation – makes one almost immediately an arrogant bigot, and worthy of scorn. Pushed by popular culture icons such as Oprah, liberal pastors began to adopt the idea, and congregations soon followed. A Pew research poll found that 52% of professing Christians believed that even non-Christian faiths can lead to eternal life. Of course that doesn’t make their opinion correct (it only makes it unorthodox), but it does indicate how far the reach of religious pluralism – Paganism – has spread today.

Pagan Rome and Greece were notorious for their licentious sexual activities and wanton lasciviousness in the pursuit of pleasure. Homosexuality was not considered a sin; in fact, it was rather expected in their cultural milieu. While they never went so far as to call a homosexual union a civil marriage, no state or custom apparently tried to prevent the practice, but instead encouraged it in certain instances. This was one of the sins that Paul preached against to the Corinthians, who were notorious in the Hellenic world – even to Cicero – for their lust and sexual liberty.

Liberal Christians now have come full circle, refuting overtly what Paul had preached and insisting that such activity is not only tolerable, but may be righteous in the sight of God. They no longer preach against perversion as outlined in the Bible, but celebrate it as much, if not more so, than the Pagans of Corinth or Rome.

Perhaps the latest iteration of Paganism to manifest itself in the professing Christian Church is the toleration toward polyamory. One could predict it wouldn’t be long, given the logic of sexual acceptance based solely on the litmus test of “consent.” (Not the objective consent of the Creator, mind you, but the subjective consent of the Creation.) Today, ordained ministers in the Christian Church are not just tolerating the idea of polyamorous relationships, but are encouraging it as a scriptural sacrament.

Jeff Hood, a minister in the Southern Baptist Convention justified his views on holy polyamory by invoking the Holy trinity:

“I heard the voices of the polyamorous repeatedly whispering, ‘Why are you persecuting us?’ Unable to contain myself, I shouted out, ‘Forgive me!’ At that moment, I collapsed. Before I perished, I felt the pull.

“Divine polyamory found me a sinner and lifted me up by grace. The Holy Trinity ushered me to love. Looking around, I saw a great cloud of polyamorous witnesses shouting, ‘Holy! Holy! Holy, is the polyamorous love of God!’”

What this reminds me of is the same orgiastic culture so prevalent in Pagan Rome and Greece – the same culture to whom the Apostles and the Church Fathers fought so hard to preach the Gospel, in order to free them from their sins.

In the second century, Marcus Minucius Felix wrote an apologetic dialogue responding to Pagan criticisms of the Christian Church, and in this dialogue Felix exposes the same behaviors outlined above, and goes further to chastise the Pagan culture for their abhorrent practice of abortion and infanticide:

“And I see that you at one time expose your begotten children to wild beasts and to birds; at another, that you crush them when strangled with a miserable kind of death. There are some women who, by drinking medical preparations, extinguish the source of the future man in their very bowels, and thus commit a parricide before they bring forth. And these things assuredly come down from the teaching of your gods.”

Of course, for Liberal Christians today, they would never dare preach against abortion, but instead have come full circle into celebrating the sacrifice of children upon the Saturnine altar of the god “self-worth”.

So this raises the question: If Liberal “Christians” have re-adopted so many of the Pagan practices that the early Church evangelists preached against; and if they deny the validity of those fundamental characteristics that distinguish Christianity from Paganism (like the exclusivity of Christ), why do they insist on calling themselves Christians? If they would stop pretending, I might respect them more intellectually; but the fact remains they blaspheme the name of Christ and His work when they continue to celebrate as righteous that which God has explicitly forbidden.