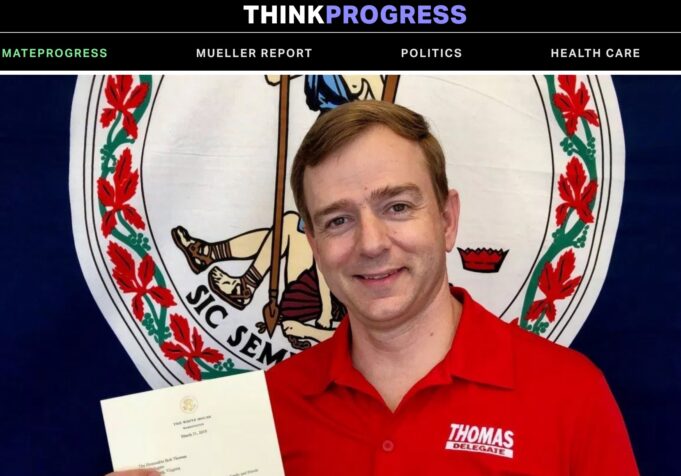 For months now, Virginia Democrats have been looking for something to put out the political fire started in January by Kathy Tran and Ralph Northam.Now they think they’ve found it, in the form of an interview with Republican Del. Bob Thomas, R-Fredericksburg.Appearing on The John Fredericks Show last week, said he supported legislation such as a law in Georgia that would prohibit abortion once a fetal heartbeat is detected.

“I think the problem we have here in Virginia is we have a Democrat governor. We’ve had one for a decade now,” Thomas said. “And if we’re ever to take the tide back and and start putting some of those laws in Virginia, we have to find candidates who can win in blue areas of the state.”Democrats took note of the statement a week later after liberal website Think Progress published a story lambasting Thomas for his “desire to eliminate abortion rights in Virginia.”Within minutes of the story’s publication Democrats attacked en masse.“If you don’t think GA/AL style laws could come to VA, check out this article,” tweeted Del. Schuyler VanValenburg, D-Henrico. “If you didn’t think the stakes were high enough in Virginia this year, read this. We have to flip #valeg blue. Women’s lives depend on it,” tweeted Del. Kathy Tran, D-Fairfax.

Tran drew national headlines this year when she brought forward a bill she said would permit abortion up to the very moment of birth.

Democrat Joshua Cole, Thomas’ likely opponent in the November election, took the opportunity to do some fundraising.

“My opponent Bob Thomas wants to ban abortion in VA, force raped women to carry the rapists child, & thinks this will get him elected,” he tweeted. “I’m running to make sure that doesn’t happen. Donate to our campaign so we can protect women’s rights.”

Republicans responded in large part by posting a short video of Tran’s infamous “My bill would allow that, yes,” comments.
“We weren’t the caucus proposing changes to abortion law this year,” the House Republican Caucus tweeted.