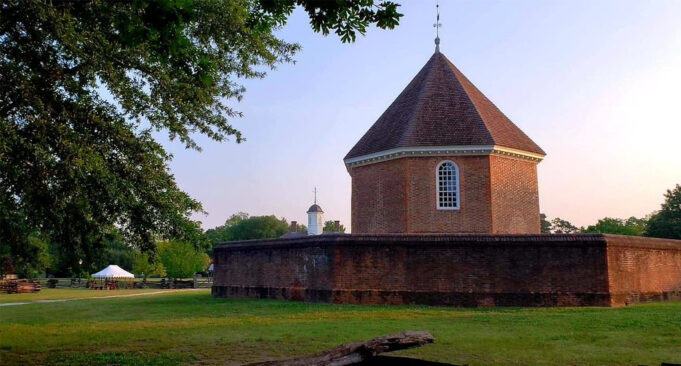 On the night of April 21, 1775, Lord Dunmore decided to enact his own form of gun control against unruly Virginians by confiscating the gunpowder at Williamsburg, transporting it to British warships sitting in the Chesapeake Bay.

The reaction from the Virginians was nothing short of outrage.

Livid at the prospect of being disarmed in the event of an Indian raid (and more likely the prospect of British occupation much as what was happening to Boston), Virginians of every stripe and background rose as one and did something that was well in the traditions of Virginians since the time of Bacon’s Rebellion — they marched on the capital.

Patrick Henry was by no means the leader of this patriotic rabble, but he made sure he was in the front of it.  As a result, Lord Dunmore was forced to return the gunpowder back to Williamsburg.

For several months, the Virginia militia occupied Williamsburg with a simple demand to Lord Dunmore: return the gunpowder or pay 330 pounds to replace it.   By June 8th, 1775 and in the dead of night Lord Dunmore whisked away his family to the HMS Fowey never to return to the colonial capital.

In fact, so ingrained was this devotion to the principle of self-defense that James Madison writing 13 years after the fact argued persuasively in Federalist 46 why the need for an individual right to bear arms was more than just a natural right, but an intrinsic requirement for the maintenance of liberty on the North American continent:

“Let a regular army, fully equal to the resources of the country, be formed; and let it be entirely at the devotion of the federal government; still it would not be going too far to say, that the State governments, with the people on their side, would be able to repel the danger. This proportion would not yield, in the United States, an army of more than twenty-five or thirty thousand men. To these would be opposed a militia amounting to near half a million of citizens with arms in their hands, officered by men chosen from among themselves, fighting for their common liberties, and united and conducted by governments possessing their affections and confidence. Besides the advantage of being armed, which the Americans possess over the people of almost every other nation, the existence of subordinate governments, to which the people are attached, and by which the militia officers are appointed, forms a barrier against the enterprises of ambition, more insurmountable than any which a simple government of any form can admit of. Notwithstanding the military establishments in the several kingdoms of Europe, which are carried as far as the public resources will bear, the governments are afraid to trust the people with arms. And it is not certain, that with this aid alone they would not be able to shake off their yokes. But were the people to possess the additional advantages of local governments chosen by themselves, who could collect the national will and direct the national force, and of officers appointed out of the militia, by these governments, and attached both to them and to the militia, it may be affirmed with the greatest assurance, that the throne of every tyranny in Europe would be speedily overturned in spite of the legions which surround it.“

The wisdom of the Founding Fathers was to ensure that the final argument of kings — the ultima ratio regnum that tyrants in Europe enscribed on their cannon — remained in the hands of the people as the only sure rampart for human liberty.

This is the wisdom of the Second Amendment.  The ultima ratio regum would not longer be held by a distant sovereign, but rather by the people who are sovereign unto themselves.  Our Bill of Rights and Constitution, designed for the purpose of constraining government and not citizens, enshrines this right not because of some slavish devotion to individualism, but rather because the alternative to “who decides?” is often the corruptible vultures who desire nothing more than to rule over and decide the destinies of other men.

It is long argued that the Second Amendment exists to defend the First Amendment, and as a consequence, we should be as violently opposed to any infringement of our 2A rights as we would be on our 1A rights.

After all, once we no longer trust our neighbors in the great task of self-government, where does the forfeiture of our natural rights end?  The answer simply is that it does not end, and eventually is recovered by a human spirit that will neither tolerate nor endure enslavement for long. 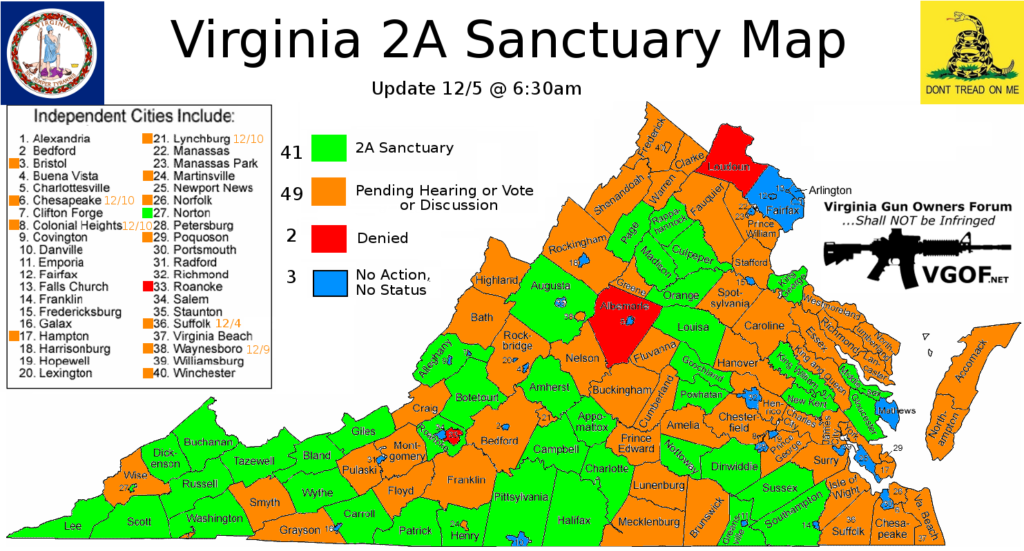 As of right now, 40 localities have enacted “Second Amendment Sanctuary” resolutions much in the same way Patrick Henry’s militia did in 1775.

Comparisons to sanctuaries for illegal immigrants are silly, nonsensical and vile — the Second Amendment is a pre-established natural right that existed long before there was a US Constitution or Virginia Declaration of Rights to define it.  No government can abrogate that right without being properly called tyrannical.

More to the point, there is a basic truth that the Second Amendment protects all the others.

Unfortunately, there is a sect of Fabian operators who would love nothing more than to radically change America.  They know that an armed and free population stands in the way of tyranny, is antithetical to social democracy, and would be the last word of freedom.

Such individuals have already bared their teeth on questions such as live-birth abortion, transgendered boys playing sports against teenage girls, forced unionism, unaffordable wages that punish small businesses and farms, and a regime of secular religious beliefs that deem marriage as something it is not and all opposition to be haters, bigots, racists or worse.

A so-called ban on “assault weapons” is a statistically negligible effort to reduce violence; no one actually believes that this is the real reason for the legislation.  Rather, it is an effort to push the envelope as far as it will go and then wait 20 years as our children become acclimated to a new normal — then push further until what passes for natural God-given rights is reduced to the privileges permitted by the state.

No small wonder then that the ghost of Patrick Henry rides again.

Truth of the matter is, Virginia is already a 2A sanctuary.  Just ask Patrick Henry and James Madison.  That Virginians today have to remind this small clique of progressives that our natural rights are non-negotiable is what brings us to this pass today.

We shouldn’t have to remind them of this fact.  But we will if we have to.