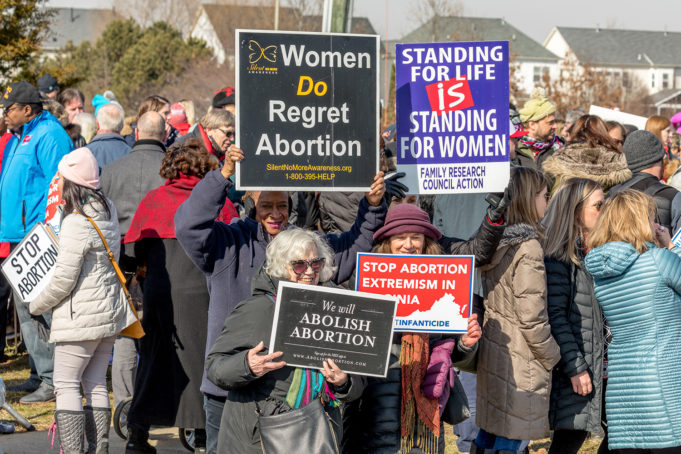 Minutes ago, the Supreme Court overturned the nearly 50-year precedent set by Roe v Wade in 1973.

Justice Samuel Alito issued the court’s majority opinion. He was joined by Justices Roberts, Gorsuch, Kavanaugh, Thomas, and Barrett in the majority.

Justices Breyer, Sotomayor, and Kagan made up the dissent.

Justice Alito writes the following in his landmark opinion:

The Constitution does not confer a right to abortion; Roe and Casey are overruled; and the authority to regulate abortion is returned to the people and their elected representatives.

The opinion continues with the following argument:

The critical question is whether the Constitution, properly understood, confers a right to obtain an abortion. Casey’s controlling opinion skipped over that question and reaffirmed Roe solely on the basis of stare decisis. A proper application of stare decisis, however, requires an assessment of the strength of the grounds on which Roe
was based. The Court, therefore, turns to the question that the Casey plurality did not consider.

First, the Court reviews the standard that the Court’s cases have used to determine whether the Fourteenth Amendment’s reference to “liberty” protects a particular right. The Constitution makes no express reference to a right to obtain an abortion, but several constitutional provisions have been offered as potential homes for an implicit constitutional right. Roe held that the abortion right is part of a right to privacy that springs from the First, Fourth, Fifth, Ninth, and Fourteenth Amendments.

The Casey Court grounded its decision solely on the theory that the right to obtain an abortion is part of the “liberty” protected by the Fourteenth Amendment’s Due Process Clause. Others have suggested that support can
be found in the Fourteenth Amendment’s Equal Protection Clause, but that theory is squarely foreclosed by the Court’s precedents, which establish that a State’s regulation of abortion is not a sex-based classification and is thus not subject to the heightened scrutiny that applies to such classifications.

Rather, regulations and prohibitions of abortion are governed by the same standard of review as other health and safety measures.

Next, the Court examines whether the right to obtain an abortion is rooted in the Nation’s history and tradition and whether it is an essential component of “ordered liberty.”

The Court finds that the right to abortion is not deeply rooted in the Nation’s history and tradition. The underlying theory on which Casey rested—that the Fourteenth Amendment’s Due Process Clause provides substantive, as well as procedural, protection for “liberty”—has long been controversial.

The Court’s decisions have held that the Due Process Clause protects two categories of substantive rights—those rights guaranteed by the first eight Amendments to the Constitution and those rights deemed fundamental that are not mentioned anywhere in the Constitution. In deciding whether a right falls into either of these categories,
the question is whether the right is “deeply rooted in [our] history and tradition” and whether it is essential to this Nation’s “scheme of ordered liberty.” Timbs v. Indiana, 586 U. S. The term “liberty” alone provides little guidance.

Thus, historical inquiries are essential whenever the Court is asked to recognize a new component of the “liberty” interest protected by the Due Process Clause. In interpreting what is meant by “liberty,” the
Court must guard against the natural human tendency to confuse what the Fourteenth Amendment protects with the Court’s own ardent views about the liberty that Americans should enjoy.

For this reason, the Court has been “reluctant” to recognize rights that are not mentioned in the Constitution.

Mary Margaret Olohan – D.C. Correspondent for the Daily Wire – was live at the steps of the Supreme Court and captured the reactions of pro-abortion activists in a series of videos shared via Twitter.

Abortion activists react to the overturn of Roe pic.twitter.com/db7SAUquj6

The impact of this decision will be monumental. It remains to be seen what further actions the Left will take to show how they feel about the result.