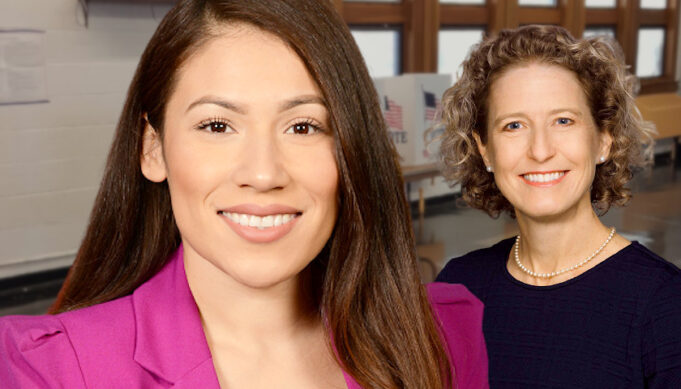 “I am honored the voters of Virginia’s seventh Congressional District have chosen me to be the Republican nominee in the general election this fall. As the first conservative Hispanic to win a Republican congressional primary in Virginia, this is a historic moment for Hispanics across Virginia and our nation. I want to thank my family, friends, volunteers, and all the voters who believe in our message of liberty, safety, and economic prosperity,” Vega said in a Tuesday night press release.

She continued, “We have accomplished our first milestone, now it is time to bring everyone, Republican and Democrat, together because inflation doesn’t discriminate. There’s no Democrat discount at the gas pump or grocery store and everyone is a victim of lawlessness. Tonight we celebrate, tomorrow we set our sights on taking back the seventh and winning in November!”

Vega won with 10,875 votes, 28.95 percent, according to unofficial results posted by the Virginia Public Access Project.

“[Vega] crushed it in PWC which is her home base while being competitive everywhere else and winning some of the more rural counties. So a nice mix of a rural and suburban win,” Former Prince William County GOP Committee vice chairman Willie Deutsch said. “She’s a dynamic minority candidate who is a conservative fighter, all things the base loves, plus a string of appearances on Fox News the last few days combined with the Ted Cruz rallies. In that respect it was very similar to how Youngkin closed his campaign last year.”

Deutsch said Vega has picked up Hispanic support and is actively spreading her message in that community, which is an important swing demographic in close races.

Derrick Anderson came in second with 8,925 votes, state Senator Bryce Reeves (R-Spotsylvania) came in third with 7,557, and Spotsylvania County Supervisor Crystal Vanuch came in fourth with 6,373 percent of the votes. David Ross got 2,278 votes, and Gina Ciarcia came in last with 1,561 votes.

That’s a good performance from Anderson, who is a newcomer to the race, but Reeves, once considered the front-runner with good name recognition, seriously under-performed. Even in Spotsylvania County, Reeves came in second to Anderson, and in Culpeper, another area where Reeves should have performed better, he came in third to Vega and Anderson.

Vanuch performed well, given a late entry into the race and that most of her campaign funds came out of her own pocket.

“Vanuch also blew things out of the water,” Deutsch said.

Deutsch said that although neither have made official announcements, Vanuch and former Stafford County Supervisor Paul Milde III are preparing to run for the GOP nomination for House of Delegates in 2023, and that Vanuch’s congressional race was prep for next year.

Some pundits have highlighted low turnout in the race, which could be bad news for Republicans who are counting on high enthusiasm to flip the district, but Deutsch said that’s not necessarily accurate.

“Nominating contests are always lower turnout than the generals. In the end this election will be decided in the fall by the price of gas, inflation, and Biden’s unfavorable numbers,” he said.

Deutsch also noted that Spanberger is originally from the Richmond suburbs, but after redistricting has lost that base and needs to get support from progressive Prince William County Democrats who might not be motivated by Spanberger’s “carpetbagging.”

When Vega was elected as the first Latina to the PWC Board of Supervisors, she came under attack from fellow Latinos, The Washington Post reported in 2020. Those kinds of attacks are likely to come up again. Vega also ran fairly far to the right, bringing in Republican heavy-hitter Senator Ted Cruz (R-TX) and earning endorsements from other strongly-conservative officials. That could be a liability for her as she tries to win the election in the moderate VA-07.

However, frustrations with Democrats nationally are expected to power a wave of Republican flips in the 2022 midterms, and VA-07 appears set to be a competitive race. After results in the nomination were clear, Dave Wasserman with the Cook Political Report called the Vega-Spanberger race a toss-up.

Kiggans easily won the nomination with 23,117 votes, 55.64 percent, according to unofficial results posted by the Virginia Public Access Project. Bell and Altman split the anti-Kiggans vote: Jarome Bell earned 11,266 votes, Tommy Altman earned 5,937 votes, and Andy Baan earned 1,224 votes. Kiggans is well-known and didn’t run as far to the right as the other candidates, like Bell who went to Mar-A-Lago to try to get Trump’s endorsement.

After redistricting, Luria is especially vulnerable and Kiggans is expected to flip the seat.

“THANK YOU!!! I am so honored and humbled to be the Republican Nominee in #VA02 this November,” Kiggans said in a Tuesday evening tweet. “This is our chance to retake control of our country. It’s time to restore American strength in our economy, at our borders, and on the world stage. Now let’s get to work!!!”