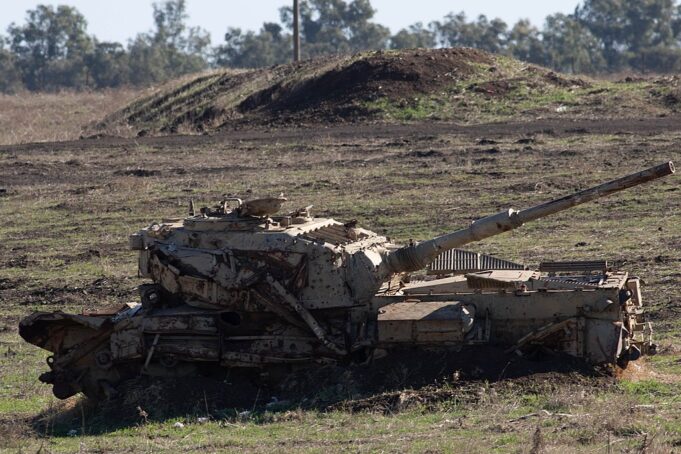 ANALYSIS – Video and photos from the battlefields in Ukraine have been showing an unusual number of Russian heavy tanks with their turrets blown clean off, sometimes being hurled away from the rest of the destroyed tank in a massive explosion.

What is causing this devastation to Russia’s vaunted armored forces?

Western anti-tank weapons such as the Javelin which strike the tanks from above are one factor.

But armor experts explain this devastating effect is primarily caused by ‘sympathetic detonations’ when all the tank’s ammunition explodes, ignited by a shock wave, or impact of primary or secondary blast fragments.

Some simply call it the ‘jack-in-the-box effect.’

And this is due to Soviet and Russian tank designs which focused on mass-producing armored vehicles in great numbers, but that are simply less survivable than their American or NATO counterparts.

Russian-made T-72 and T-80 tanks are particularly susceptible to being destroyed in this manner, in part because they both have autoloading mechanisms that store tank rounds in a carousel at the base of the turret, said Steven Zaloga, an expert on Russian and Soviet armor. Those autoloaders typically store about 20 rounds when fully loaded.

…but there is another problem: The autoloaders only hold roughly half of a Russian tank’s ammunition, said Zaloga, a senior analyst with The Teal Group, a defense and aerospace consulting company.

A fully loaded Russian tank can carry up to 40 rounds, many of which are stored in parts of the fighting compartment that are not protected against anti-tank weapons, Zaloga said. Moreover, the internal volume of Russian tanks is very small when compared with their western counterparts.

“If you get a penetration to the interior of the tank, there’s a high probability you’re going to hit something,” he said.

In comparison, U.S. tanks are designed to be far more survivable: “…the U.S. military’s M1 Abrams tanks store their ammunition in a way that protects the crew if any of the rounds or propellant explode, Zaloga said.”

The M1 was designed to take hits because the U.S. military expected to have to face superior numbers of Soviet and Warsaw Pact tanks in Central Europe, said Army Maj. Mike Liscano Jr., chief of tactics for the service’s Armor School’s 2nd Squadron, 16th Cavalry Regiment.

Because the M1’s ammunition compartment is separated from the turret by blast walls, the crews are protected if tank rounds start to cook off, Liscano said. Even if the tank is disabled, the crew should still survive so they can jump into another tank and keep fighting.

This Russian ‘jack-in-the-box’ effect should also concern all those countries like China and India who continue to buy or reproduce Russian tank designs.

Bottom line is that in a war where mass formations of Russian tanks aren’t producing any operational advantage, expect many more invading Russian tanks to be getting their turrets blown clean off.

This article originally appeared in American Liberty News. The opinions expressed in this article are those of the author and do not necessarily reflect the positions of The Republican Standard.