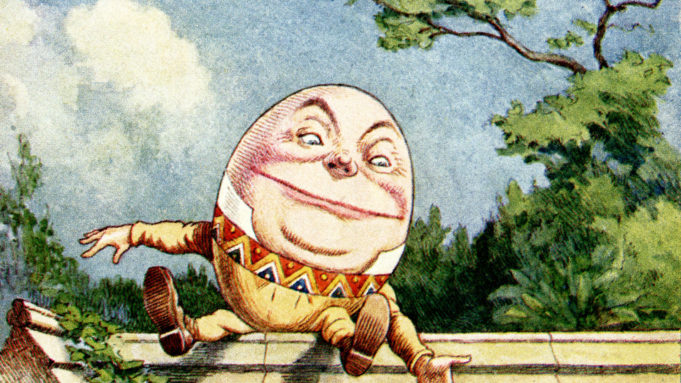 Only someone who holds a moral vision for a more progressive version of society would find the classical liberal society morally deficient or even inferior.

In a scene from Lewis Carroll’s fairy tale, Through the Looking Glass, Alice and Humpty Dumpty have a sophisticated exchange on the role of language.

Their exchange captures much of what has been called, “our contemporary moral confusion,” especially in the realm of political argument. Humpty Dumpty declares that the meaning of words in everyday language rests with the speaker’s arbitrary and unaccountable use:

It is lines like these that tempt us to think that Carroll was a political satirist. He wasn’t. But who could resist the parallels to today’s polarized political jungle, especially to hear Ms. Spanberger make her case for becoming the next Congresswoman from Henrico’s 7th Congressional District? Her recent television commercial and introductory video, “Integrity,” are strategically created to captivate the electorate’s attention.

She believes this integrity will be demonstrated through her particular ethic of political representation. Although she is vague, her ethic of representation presumes a logical feature worth examining: selflessness.

The shift is subtle, but momentous. On further review, we see that selflessness should not be confused with altruism. To successfully make the shift requires employing Humpty’s theorem.

The theorem adds commendatory emotional benefit to her political rhetoric that masks the presentation of any particular issue. It is as though terms like ‘representation,’ ‘listening,’ and ‘respect’ provide a common vocabulary through which to channel her intensity of resistance to widespread social attitudes. Yet at the same time, she can refrain from overtly engaging the traditional moral conscience that encapsulates the ordinary understanding of altruism. Thus, Abigail Spanberger’s pledge that she will provide a new and improved ethic of representation displays an affinity to Humpty Dumpty’s Theorem.

Based on her words and their ramifications from the video, it’s fair to say that she understands ‘integrity’ as acting sincerely on principles with a willingness to accept their consequences.

Ms. Spanberger accentuates her qualities by contrasting them with those of “our member of Congress” (i.e. Congressman Dave Brat), whom she paints as inattentive and partisan.

Her exclusive appropriation of the value ‘respect’ is a veiled suggestion that Congressman Brat elevates ideology above his constituents. Consequently, her case to the electorate rests on her promise for a superior ethic of political representation, one that would place people – all persons and their interests – above partisan politics.

However there’s something unsettling about Ms. Spanberger characterizing her new and improved ethic of public service as possessing a quality of selflessness. What is meant by representation that involves selflessness? The video depicts her as altruistic with an ethic of representation that is unconcerned with her own personal advantage. There’s no reason to doubt that she could be relied upon not to sacrifice our interests for her personal ones. How-ever, this is only part of an ethic of representation.

Congressman Brat is plainspoken about his devotion to liberty ordered through the U.S. Constitution. Liberty is a fundamental American value noticeably absent from the vocabulary of Ms. Spanberger’s commercial. The U.S. Constitution is the filter through which Congressman Brat assesses needs and wants or vested interests. His emphasis is perfectly consistent with the high importance the founders attached to sustaining liberty.

Congressman Brat’s altruistic ethic of representation differs from Ms. Spanberger’s; it is informed by classical liberal polity with its objective ethic. His vision of human society affirms that individuals possess interests, reflecting significant human purposes, such as aspirations to love and to be loved and a desire to pursue the good life.

In classical liberal society, altruism means that when self-interests conflict, citizens are sometimes called to give up their advantage to benefit others.

Ms. Spanberger’s ethic of representation, however, equivocates about altruism, going beyond it to require a complete effacing of the self-layered with human qualities that might create social advantages.

To the contrary, Congressman Brat’s altruistic ethic of representation merely holds self-interest in abeyance to serve the interests of others. His form of human society does not demand that ordinary people solemnly renounce their self. Rather it recognizes self as necessary for respecting other selves.

Congressman Brat is unapologetic about the importance of virtue for sustaining the Framers’ hope for liberty . He further affirms their view that our essential political rights as stated in the U.S. Constitution are awarded inalienably and absolutely by our Creator. They are not subject to the whims of fashionable trends moving in society. All human beings are equal under the law and before God. There is no underlying presumption that human beings are equal in their talents. Instead they are free to employ them to their fullest in their private pursuits of the good life.

By stark contrast, Ms Spanberger’s ethic of representation as a display of selflessness raises a profound critical issue. It is difficult to discern whether she has any moral scruples preventing her from sacrificing our interests for the sake of a higher social good, as she deems fit, and call that American.

Her video presents two troubling statements that disclose her understanding of community. Both are vacuous in content. Both are presented as moral arguments.

This first statement flatters to mislead the listener. “The parties are not the enemy. It’s the forces trying to turn us against each other.” One wonders what she means by the abstract “forces.” It is difficult to think otherwise than that it is a veiled attack on anyone who has moral commitments that differ with her progressive view of liberal society, whether grounded in religious conviction or non-religious sentiment. One can only conclude that she would exclude such perspectives and feel justified in doing so.

This leads directly to the next issue. Her second statement is surprisingly problematic. “We Americans are in this together.” Despite her representations to protect the common good, the editorial “we” is her surefire way of addressing her message to those who share her political values.

The rhetorical device insinuates quite literally the intent to excommunicate any who hold a differing view. Thus, if anyone finds incoherent Spanberger’s progressive view of liberal democracy, which holds autonomous diversity as a single supreme ideal, and takes notice of its corrosive effect on the common morality, such disputants are neither a person worthy of her respect, nor worthy of being heard. Worse yet, they are not even Americans!

The source of Ms. Spanberger’s censure of Congressman Brat is her commitment to a moral scheme that supports her version of society — one presumed and unjustified in both video and commercial.

Only someone who holds a moral vision for a more progressive version of society would find the classical liberal society morally deficient or even inferior. This equivocation on liberal polity is why Ms. Spanberger’s pledge of so-called ‘selfless’ representation poses an affinity toward “Humpty Dumpty’s Theorem” to use language, making words mean “just what [she] chooses them to mean – neither more nor less.”

Thus, Ms. Spanberger negates her case for Congress by engaging in forms of language manipulation that corrupt her ethic of representation, excluding those who do not embrace her vision of community.

Scott E. Daniels, Ph.D, M.A. (Philosophy of Religion), M.Div. is the former Deputy Secretary of Health and Human Resources for the Commonwealth of Virginia. He served in the administrations of four U.S. presidents, a U.S. senator, and two Virginia governors. He lectures on ethics and public policy in colleges and universities in Central Virginia.  Reprinted originally and with permission from the The Henrico Review.