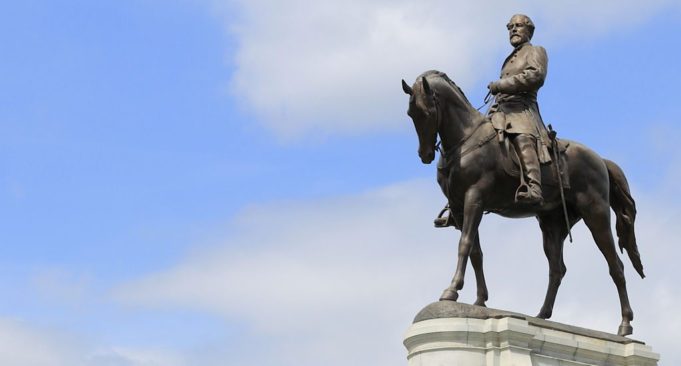 NBC 29 reports that Democratic leadership has constructed a wall around the Robert E. Lee Memorial on Richmond’s Monument Avenue in preparation for destroying the monument.

While the court cases have yet to be filed, such pretense to law did not prevent Mayor LeVar Stoney (D-Richmond) from removing other statues along Monument Avenue — including those to Stonewall Jackson, JEB Stuart, and Matthew Fontaine Maury who earned his contributions to cartography.

More from this morning’s report:

The Department of General Services announced a fence will be installed around the Lee Monument grounds for the safety of visitors and workers in preparation for the removal of the Lee statue.

The DGS says they want to be prepared to act quickly upon a final determination. The fencing is not intended to be permanent.

Abandoned personal items were removed from the site.

Twitter has been quick to document the building of the new wall around Lee:

The Department of General Services announced that workers on Monday will install fencing around the Lee Monument in Richmond as part of the department's plan to prepare to remove the statue. The department also made clear that the statue won't… https://t.co/YR5WpLbvT3

Of course, the construction of the wall was not without incident, as Antifa members began to gather and heckle both Virginia State Police and Capitol Police as they sensed an opportunity for further disruption.

I’m out at Lee monument where the state is installing fences around the circle that has served as the defacto headquarters of racial justice movement this summer. It’s been calm until just now when Capitol+VSP approached crowd gathered outside fences. They are just facing off pic.twitter.com/TUsNzXjZW6

More concerning to the protesters is that the Lee Monument has served as a hub for their activities and their community, with free food and other resources being distributed in a sort of imitation of Seattle’s CHOP Zone.

Fence is full installed now around Lee Monument/MDP Circle. Only one Capitol Police officer and the folks from the free kitchen are still out here. Bee, who’s been tilling the community garden, said fencing is impacting the free food & coat distribution they’ve been doing. @myVPM pic.twitter.com/vWYLMDR3Mc

Northam’s order to close off Lee Circle in the wake of a years long legal battle that will most likely go to the US Supreme Court is being held to equal ire to both proponents for Lee’s removal and opponents alike — neither camp fully trusting Northam’s commitment to either the effort to destroy the memorial or preserve history according to the rule of law.

The Lee Statue was a private donation given in perpetuity to the Commonwealth of Virginia and predates the Jim Crow era by as much as a decade.