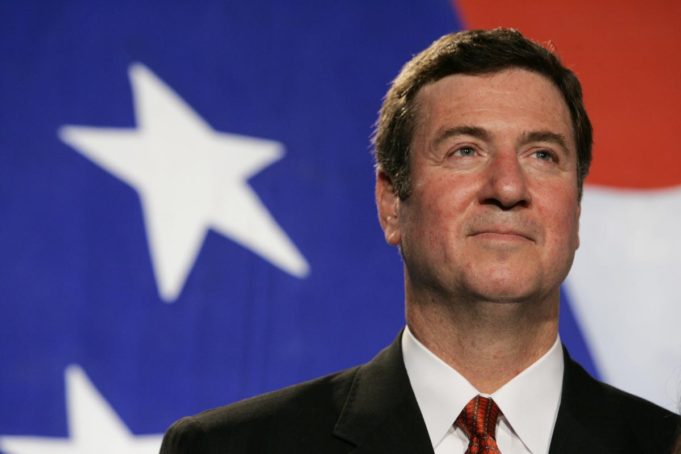 On Tuesday, Governor George Allen and Susan Allen endorsed Kirk Cox (R-Colonial Heights) for Governor. The former Governor and his wife join over 150 other Republican leaders and activists on former-Speaker Cox’s impressively long list of endorsements.

“My friendship with Kirk and admiration for his conservative leadership goes back more than three decades, to our service together in the House of Delegates and then his key legislative role in helping enact our agenda of honest change for Virginians during my term as Governor,” Allen said. “I’ve watched him put our conservative principles to work solving problems and improving Virginians’ lives as a teacher and coach, delegate, majority leader, and Speaker of the House. He’s a proven leader and winner, and he will make an excellent, steady, and most knowledgeable Governor.”

Just as notable, First Lady Susan Allen — a longtime favorite among Virginia Republicans — also chimed in with a strong endorsement for Cox’s candidacy:

“Kirk holds the bluest seat of any Republican in the General Assembly, proving he has the ability to unite Virginians and win. To elect a Republican Governor of Virginia in 2021, we need to expand our support by reaching out with a hopeful, positive vision that shows our conservative principles work for everyone. Who better than Kirk, a beloved teacher and coach, to show we’re committed to making our classrooms healthy and wholesome places where all students learn? Who can better reassure anxious mothers that we will keep their homes and schools and neighborhoods safe than Kirk, who has worked to protect law-abiding citizens for nearly three decades? Who could be more authentic and relatable to all of Virginia’s hardworking people than a servant leader like Kirk, whose kindness and work ethic are legendary?”

All of these accolades point towards a pro-education emphasis from the former Virginia Speaker, one that this unwilling to concede the idea that public education must be the province of the left.

Cox welcomed the endorsements with an endorsement of his own — that being, for the Allen legacy:

“The Allens have taught us many things, but none more important than the wisdom of taking your principles and ideas confidently to the people and trusting in their good common sense judgment. The Democrats had a monopoly in Washington and Richmond when George Allen ran for Governor, just like today, and all the experts said the Democrats were sure to win again, just like they’re saying today. But George and Susan would not be discouraged—they took their ideas to the people and won a decisive victory. Over the next 10 months, we’re going to follow their example and show Virginians they deserve better than an out-of-touch, self-serving, one-party monopoly of power. We’re going to take our conservative principles and common sense ideas to all the people of Virginia and give them the choice for a better way when they elect their next Governor.”

As Virginia’s most outspoken Dixiecrat, Amanda Chase, grapples with Senate censures and the loss of committee assignments, Kirk Cox appears focused on bringing the party together and reclaiming Virginia’s Governor Mansion in 2021.

Of course, endorsements cannot guarantee victory, but amid a decade-long drought for Republican statewide victory, Kirk Cox having Governor Allen in his corner, a man who knows what it takes to win over the Commonwealth, is a good indicator of Cox’s statewide potential.

As for whether Kirk Cox can build the coalition necessary to reclaim the Governor’s Mansion for the Republican Party only time will tell, but Virginia’s 67th Governor is putting his money on Cox to become Virginia’s 74th.