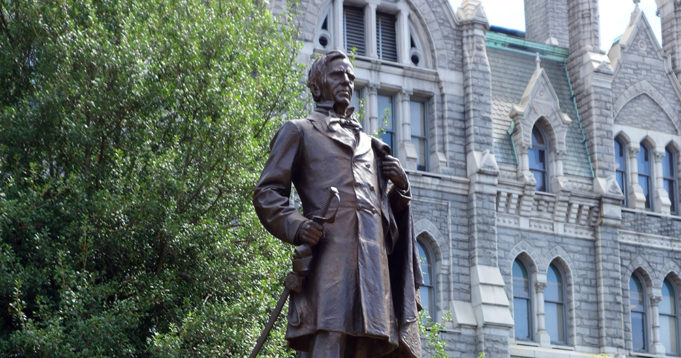 On September 20, 1836, James M. Smith – younger brother to William “Extra Billy” Smith – published an account in the Lynchburg Virginian accusing the Danville Reporter of libel against his brother.

“Extra Billy” Smith would eventually serve as member of the House of Representatives, a Civil War General and governor of Virginia (at the same time), and finally return to the Virginia House of Delegates as an octogenarian. But in 1836, he had just been elected to serve in the Senate of Virginia. In 1831, he had won a contract to build a line of mail delivery, and began gaining a reputation of charging extra fees to supplement expanded spur-line deliveries to the main-line – hence the nickname “Extra Billy.”

It was this reputation that caused certain newspapers to speak out against this new senator in Virginia, but some – including James M. Smith – made a violent defense of William’s good name.

We complain of the tenor of political discussion today, but some of us are aware it is quite mild to what public figures – and the media – had to endure in the 19th Century. The Denville Reporter, William Smith, and his brother did not hold back, and even admitted to violence against the media in a competing newspaper.

In August, the Denville Reporter’s junior editor, Thomas Terry, published an editorial complaining of the poor roads poor service of the U.S. Postal Service under the supervision of William Smith:

“This notorious demagogue and peculator,” Terry wrote, “is the Mail contractor on a portion of the tri-weekly line, running between Lynchburg and Danville.” The editor then noted that citizens had repeatedly informed the Postmaster General of the deterioration in service, and the “gross negligence of this shameless public swindler.” Yet, Terry complained, the Postmaster general “heeds not the complaints of the community – permitting failure to be added to failure, without applying a corrective, all because [William] Smith is an executive pet. The penitentiary would be the proper place for such scoundrels.”

After being accused of libel, the Denville Reporter doubled down, saying of the editorial, “The shaft was winged deliberately – with malice prepense, and if it hit the mark, and is found a poisoned one, let the victim writhe – we do not intend to retract or modify the charges made, for we know them to be true, and a dozen of the most respectable citizens of Pittsylvania will subscribe to their truth.”

What James Smith writes next is so good, I will publish his account in whole, emphasizing for the reader language or events of particular interest:

“Let it be recollected that these most base and infamous calumnies were uttered by entire strangers, without any just provocation, and against my eldest and dearly beloved brother – a brother I know to be honorable and just, though in difficulties – a brother with a wife and eight children – and uttered by a young man with no ties it would be calamitous to break, and no reputation beyond the smoke of his own chimney.

“Could I be indifferent to the relative difference in the situation of the parties more immediately interested? Or permit my aggrieved brother to encounter the risk of inflicting that punishment justly due? No.

“Prompted by own indignant feelings and clear sense of duty only, I determined to give Thomas A. Terry a lesson that should profit him throughout all future time. Was I wrong? I appeal to every honorable man, was I wrong?

“Having business with Peck, Wellford & Co. which necessarily took me to Danville, I determined to embrace that opportunity to effect my purposes. I accordingly armed myself with a cane and cowhide for T.A. Terry, and with more deadly weapons for emergencies. Mr. [Marcellus] Bell accompanies on business, but also to prevent interruption while Terry was receiving his due.

“I went to the residence of Col. Price, remained a day, and returned to Danville. While at the tavern of Mr. Sullivan, an individual passed through the room. I asked who he was and received the requisite information. On his return I walked up to him and asked if he were the Junior Editor of the Danville Reporter?

“He answered he was. I rejoined, ‘you ***** rascal, how dare you slander my brother?’ accompanying my remarks with a blow. After a few blows, I partly prostrated him, bleeding profusely.—Having effected my purpose, I walked into the passage, and read the offensive articles from the Reporter, as the ground of the chastisement I had inflicted, and commented thereon as my feelings prompted.

“The public will perceive that herein is nothing but an ordinary affray, such as Terry acknowledged he expected with my brother—a severe chastisement inflicted for an outrage which none approve, and all parties condemn.

“Wherein then have I done wrong? But the reporter charges that I intended to assassinate Terry. If so, what would have prevented it? I was armed with pistols and a Bowie knife, and could have shot or cut him down, for there was none by to prevent it. So far from a disposition to produce death, I used the small end of my cane, and did not bring Terry to the floor until I had given him several blows: and so little was he seriously injured, that he was able to ride twenty miles to Court, and assist in the management of the case against me.

“Some may think I ought to have given him more notice before I made the attack—I do not think so, under the circumstances. The writer of such articles should never require notice. He wrote with ‘malice prepense,’ as he avows—expected an attack, and should have been prepared for it; and I of course concluded that he was, and fully – especially as I had every reason to believe he knew me, and that in passing and repassing through the room, his purpose was to brave [taunt] me.

“After the affray with Terry, the matter ended, as I conceived, and I became quiet. Up to the time I finished reading the extract, I suppose that thirty minutes must have elapsed—during the time, several persons had come in, and others were coming in when I had ceased. I saw that a cloud was rising—that a storm was brewing—but determined to stand my ground, meet all the consequences, and make good the castigation I had given T. A. Terry.

“Finally, a large crowd of persons gathered around me, all manifesting an eagerness to commence an assault as seen as the individual could be pointed out with certainty. In the state of things, [Officer] Townes (brave, high-minded and generous as I afterwards learned) came rushing through the crowd, crying out ‘where is he? Where is he?’

“The officer rushed by me in pursuit of Bell. I saw him draw a pistol and present it, saying ‘stand off, or I’ll shoot you—are you an officer, sir?’

“At this moment I (commanding a view of the crowd from the somewhat elevated position I occupied on the steps which led to the sitting room from the passage) pronounced in a loud voice, ‘Don’t shoot Bell—Gentlemen, I am the responsible man—I have done all the mischief, and I am accountable to law or to individuals.’

“At this annunciation, Townes looked around, and approaching me, said, ‘I take you in custody,’ or something tantamount. I replied, ‘very well, sir—I make no resistance—I bow with pleasure to the laws of my country—I am your prisoner,’ &c. He held me by the coat a short time, and then at the bidding of the crowd, went to arrest Bell. No sooner was I let go than three men seized me violently by the collar, cursed me, and commenced a furious assault upon my person, without any earthly provocation.

“As much disposed to obey the laws of my country as I was fearful to incur the rescue of their violation, I could see no room to hesitate as to the propriety of defending myself in this emergency—Indeed this assault and the bitterness expressed in the countenances of those who made it, followed as they were by as many more as could strike me with their fists, sticks and umbrellas, together with the loud and angry imprecation (such as ‘kill the d****d rascal’) that fell in quick succession upon my ear, induced me to believe that their object was to kill me.

“It was not until this extremity that I felt myself compelled to resort to my right of self-defence, which had accrued from the very moment that rude hands were laid upon me. I accordingly drew a pistol from my pocket and fired at the person most active against me. One individual nobly attempted to gouge me, but I transferred his finger from my eye to my mouth and held him some time ‘in durance vile,’ no doubt not a little to his discomfort. In his efforts to extricate himself, he broke another finger, as I learn, before I let him go.

“This is an all important face—it shows how I was beset and assailed. It is important in another respect—for it is conceded, at least it was proven by this individual, it was after he extricated himself that I fired—thus demonstrating that it was in this desperate extremity, assailed by an excited multitude, impelled by a regard for my own safety, I resorted to my arms.

“This decisive step saved me. The crowd receded like a wave, and I submitted cheerfully in peace upon the first assurances of fair and proper treatment. Armed as I was, had I been stimulated by a thirst for blood, what could have prevented me from feasting upon the unarmed crowd around me? But I had no revenge to gratify—not a man in the crowd did I even know, and when impelled by a regard for my life to fire, it was with extreme reluctance. It was my wish to hurt no man if it could be prevented, and I forbore with that view longer perhaps than any one else would have done similarly exposed.

“The public will perceive that the affair with Terry was an ordinary affray—that the firing by which one person was slighted wounded, was a distinct transaction, and was purely an act of self-defence. I rely on upon the public with a just confidence, that my motives will be duly appreciated.”

Thus ends James Smith’s published testimony about his response to media slander. There is much more to the story, and I have included the full article here, which includes “Extra Billy’s” account and defense of his character, as well.