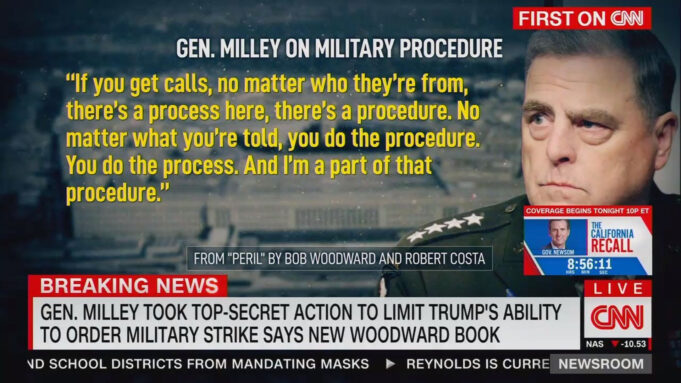 General Mark Milley did more to undermine American democracy than any other person in America in January 2021.

What did he do?

FIRST, General Milley instructed members of the military that any lawful order to authorize force against America’s enemies — particularly in the South China Sea — were to run through him for authorization first.

THIRD and perhaps most damning, General Milley reached out to General Li Zuocheng of the People’s Liberation Army stating that Milley himself would warn Zuocheng of any military action against the communist government.

All of this from the general who lost us Afghanistan.

Republicans have a myth firmly implanted that the politicians should be able to govern.  Democrats know a truth that we have yet to grasp, namely that it is the bureaucrats — not the politicians — who run the government.

Bureaucrats can outlast the politicians, slow things down, force issues, create problems and potholes, tip off reporters, create scandal, skim off the top, and even collaborate with other elected officials to engineer outcomes.

Worst part?  Bureaucrats are typically accountable to no one.

General Mark Milley is that kind of bureaucrat.

So here’s the problem.  If generals and bureaucrats can at their sole discretion break the chain of command, if they can reach out to political opponents, if they can reach out to other nations?  What good are politicians?  What good is this whole vaunted nonsense about democracy if the bureaucrats can — at a whim — run right over top of the popular will?

We aren’t talking about illegal orders here.  Nor are we talking about nuclear warfare (and those who hide behind that talking point are simply lying in order to justify their cooperation in doing the wrong thing).  No one credibly believes we were on the cusp of a nuclear war because of Trump — and if you do?  Congratulations, you have been propagandized by the left.

Nor are we talking about a “coup” or any nonsense like that.  No one seriously believes that the events of January 6th were anything more or less than the mob behavior we saw during the BLM/Antifa riots during 2020.  Or the threat of violence if Trump had been declared the winner in November.  Or the actual storming of the US Capitol during the Kavanaugh Hearings in 2018 where 120 leftists were arrested.

Was that a coup?

Bob Woodward’s latest book comes out next Tuesday.  But if the details we are seeing here are just the tip of the iceberg?  This nation might be further gone than many of us care to realize.

Just in case you are concerned that this sort of talk is a bit over the top?  Here’s Erick Erickson giving his US$0.02 and coming to the same conclusions.

This is bad, folks.