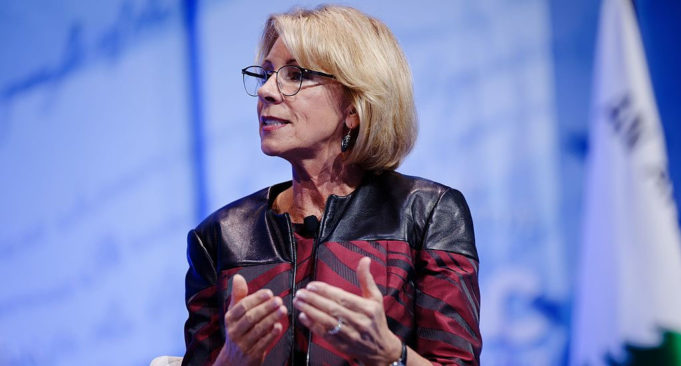 Betsy DeVos has had an uneven tenure at the Department of Education, sometimes struggling with the demands of a cabinet-level job.

Today was not one of those times.

In a detailed speech in front of an audience of law students in northern Virginia, DeVos announced that the federal policy on how colleges deal with accusations of sexual misconduct – commonly referred to as Title IX – will be revised.  In doing so, she began the necessary process of rescinding one of the more destructive examples of government overreach from the Obama administration.

Entire books (and good ones) have been written about the Title IX system, but to appreciate today’s announcement, all you have to know is that Title IX is a prime example of what happens when regulators act without regard to legal restrictions on their power.

The current federal policy is largely drawn from a 2011 letter written by an official in the Department of Education.  Not a law, and not even a formal administrative rule – just a letter, and one that forces schools to discard protections for the accused while using the lowest possible standard of evidence in their cases.

If that seems suspicious to you, then you’re paying attention.  Even when agencies like the Department of Education get to make legally binding rules, they have to go through a specific process to do so.  This process ensures people affected by the rule are notified and get a chance to comment.

The regulators in this case decided to duck that requirement by saying their letter was mere “guidance.”  Not anything legally binding, of course, just some handy ol’ tips from your pals at the federal government.

Yet when several schools declined to take this friendly advice, the government dedicated itself to publicly embarrassing them and stripping away their federal funding, a penalty which would financially cripple all but a tiny handful of colleges.  This kind of extortion is the hallmark of government regulators who are willing to manipulate their way into getting what they can’t achieve though legitimate, constitutional means.

Reversing this policy was always going to be difficult for the same reason it was flawed to begin with: the subject of sexual assault is an emotionally fraught one that causes a unique kind of harm to its victims and presents unique challenges to law enforcement.  Strong emotions often lead to bad decisions, and that is what had occurred here.

So it was a welcome sight to see DeVos, who was notably unsteady during her confirmation hearing and subsequent congressional appearances, deliver a thoughtful and carefully researched rebuke to the legally and morally dubious approach currently in place.  She promised that a formal “notice and comment” process to create a new policy will take place, as it should have many, many years ago.

The debate over this issue is far from over, but the fact there will even be a debate – instead of a single letter dashed off from the desk of an unknown bureaucrat – is already a significant improvement.