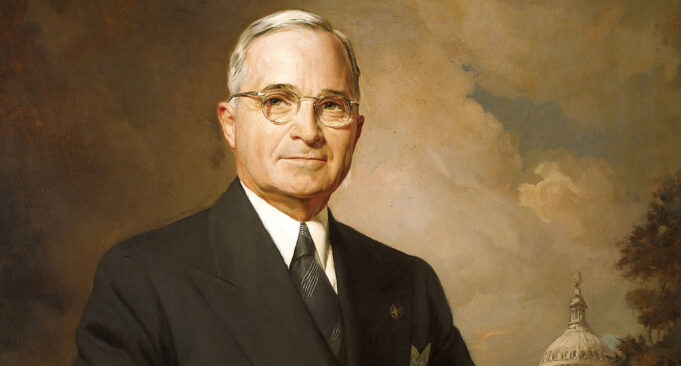 I grew up with a genuine respect for President Harry S. Truman, a Democrat and the man left to fill the shoes of President Franklin D. Roosevelt at the end of World War II. As a young officer, I learned that Truman, like me, was also an artilleryman.

When Roosevelt died, Truman took on the fulsome burden of commander-in-chief amid WW II. He was immediately confronted with significant issues, including the fateful decision to end the war by dropping two nuclear bombs on Japan. That was probably the toughest decision he made in his presidency.

The experience of combat during WW I as a soldier and the burden of presidential decision-making during both WW II and the Korean War gave Truman much to ponder.

After he retired to Independence, Missouri, I am sure he reflected on those decisions. I can imagine during the solitude of his quiet neighborhood walks far from the Oval Office and the cry of battle, he must have asked himself, “Was it worth it to kill so many to avert the deaths of so many more?”

There were other decisions also.

After WW II, Truman was confronted with the conflict that had erupted on the Korean Peninsula. In June 1950, North Korean communist forces invaded democratic South Korea. Truman made the call to send American troops as part of a United Nations effort to restore peace and force the North Korean Army into retreat. In the course of that war, Private First-Class George C. Banning serving with Company B, 5th Infantry Regiment, 5th Regimental Combat Team, was killed in action on 11 May 1953 near Sagimak, Korea. He was one of 36,574 Americans who died in Korea during and after President Truman’s watch.

In the Spring of 2017, I visited the Truman Presidential Library in Independence. Of all the exhibits, the most riveting is the display of a letter from William Banning of New Canaan, Connecticut. He was PFC Banning’s father. In his grief, the senior Banning sent Truman a letter along with his dead son’s Purple Heart Medal. This is what Banning wrote:

“Mr. Truman, As you have been directly responsible for the loss of our son’s life in Korea, you might just as well keep this emblem on display in your trophy room, as a memory of one of your historic deeds. Our major regret at this time is that your daughter was not there to receive the same treatment as our son received in Korea. Singed [sic] William Banning”

Undoubtedly Truman was deeply affected by this letter from a fellow father. He kept both the letter and the Purple Heart in his desk drawer for years. I’m sure on his long walks in Independence, he recalled that letter and asked himself, “What could I have done to avoid that young man’s death?”

After Truman died, the museum staff found the letter and medal in the desk drawer of his working office at the library. Truman did not share the letter or the medal with anyone. But he retained it as a personal reminder of the burden of command.

He did not shift under the burden of that responsibility. He blamed no one else for his decisions. They were his and his alone and he knew it. Nor did he try to refute Mr. Banning with platitudes. He simply bore the criticism as the necessary price that comes with the burden and privilege of command.

The contrast between President Harry Truman and President Joe Biden is stark. Harry Truman had shoulders big enough to bear the responsibility that was solely his. He had no cowardly impulse to blame others. Neither did he try to substitute his pain for the pain of a grieving father as if one negates the other. President Truman simply understood that the agony Mr. Banning suffered and the expression he gave to it were both natural and justified. Parents are permitted to grieve the loss of a child in combat without refutation. Harry Truman was big enough to honor and respect that.

But Mr. Biden’s shoulders are small. He blames many for his decisions while routinely engaging in a maudlin effort to compare the non-combat death of his own son—painful as that must be—to the pain of others whose sons and daughters have died far from home in bloody combat as a direct result of Mr. Biden’s decisions. Americans have grown weary of Mr. Biden’s blaming and self-pity.

Joe Biden has recently mouthed the words—as President Truman declared—that “the buck stops here.” Harry Truman actually believed it. But he was a big man, not a small one.