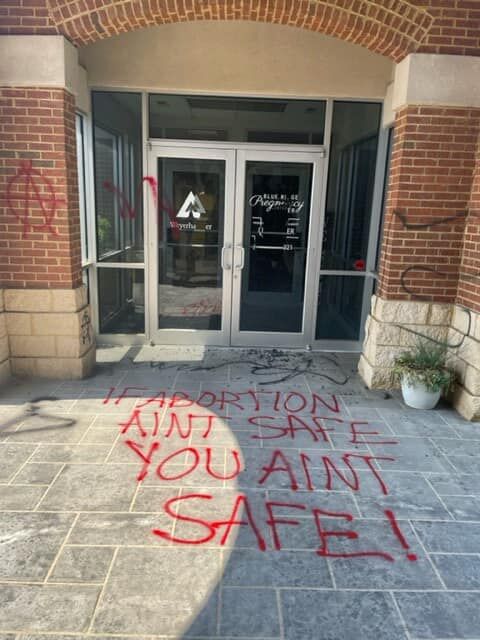 Attorney General Miyares has paid a visit to a pregnancy center that was vandalized and offered support to the center in the face of intimidation.

Yesterday I had the chance to tour the Blue Ridge Pregnancy Center, which was recently vandalized by cowards.

Private charities like these are critical to their communities, providing much needed services, resources, care & compassion to women in need. https://t.co/FgcP1ScBnW

As previously reported, police in Lynchburg Virginia are investigating an act of vandalism that took place at the Blue Ridge Pregnancy Center that was vandalized by four masked individuals. Police photos show the entrance and out walls of the center marked with graffiti — “Jone’s Revenge,” “If Abortion ain’t safe you ain’t safe!” anarchy symbols and drawings of coat hangers — and at least three windows with broken glass.

Clearly targeted in response to the Supreme Court’s decision to overturn Roe v. Wade, the Blue Ridge Pregnancy Center is listed among several available crisis pregnancy centers — organizations that provide services like ultrasounds or “abortion consultations.” These centers often try to convince pregnant women not to get an abortion and have religious affiliations.

Governor Youngkin quickly offered his support and condemned the act, saying that there “is no room for this in Virginia. Breaking the law is unacceptable. This is not how we find common ground”

To add further support to the center, Attorney General Miyares along with several members of the General Assembly — including state Sen. Steve Newman, state Sen. Mark Peake, Del. Wendell Walker — as well as people from the community, took a tour of the pregnancy center and condemning the acts against them.

“Individuals decided to intimidate and terrorize the very, very best of Virginia,” Miyares said. “The people that did this are the worst of Virginia. Taking a crowbar is no way to make a political statement”

However, support for the center goes beyond state and local leaders, and despite everything, the vandalism has since brought the community closer together.

“The donations monetarily have been amazing. People definitely are for what we do,” Blue Ridge Pregnancy Center Executive Director Susan Campbell said.

“Every day we come in and the door is blocked with 20 packages from an Amazon registry gift list.”

While the perpetrators of this senseless harassment have yet to be discovered, it is heartwarming to see the community come together and support each other in the wake of these threats of violence.