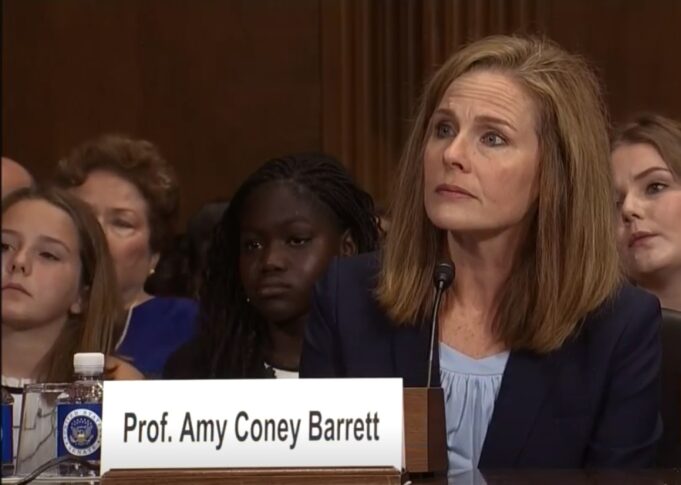 As reported by The Daily Wire, Activists from Rise Up 4 Abortion Rights proceeded to Barrett’s home to protest the potential reversal of the 1973 decision in Roe v. Wade.

A video posted to Twitter by the group shows protesters with their hands taped to baby dolls and their groins covered in what appears to be fake blood.

We aren't incubators! Youth procession delivered baby dolls to Amy Coney Barrett. We aren’t protesting to change the minds of women-hating fascists.We're calling on the pro-choice majority, on YOU, to get in the streets to STOP #SCOTUS from overturning Roehttps://t.co/Y0oCPlHcsr pic.twitter.com/nkHT7iamHO

Some held signs with slogans including “abortion on demand and without apology,” according to Fox News, while one sign had a picture of a coat hanger and the words “not going back,” the New York Post reported.

The court is expected to announce a decision on Roe in June, prompting protests and increased security at the justices' homes.

Winsome Sears – Virginia’s Lieutenant Governor – recently spoke with Fox News, and ripped into the Left, disgusted by the “grotesque images that these young, young  girls are carrying,” Sears said.

These kinds of protests seem to be the norm following the historic leak of the Supreme Court opinion which may be set to overturn Roe v. Wade.

Many pro-choice protestors have taken to harassing and threatening conservative members of the Supreme Court with violence. Last Wednesday, two U.S. Marshals witnessed a suspect dressed in black clothing exit a taxi in front of Justice Kavanaugh’s Montgomery County, MD home with a backpack and suitcase. Shortly afterward, the suspect, identified as Nicholas John Roske, called 911 to report he was experiencing suicidal thoughts and intended to kill Kavanaugh in response to the Supreme Court draft opinion which was leaked in May.

It’s not just Supreme Court justices that are being targeted either. In a recent report released by Fox News, the Susan B. Anthony Pro-Life America group detailed 49 incidents of violence, vandalism, and harassment committed by pro-abortion activists since the May 2nd leak. At least 47 of those incidents included the targeting of pro-life individuals, events, organizations, pregnancy centers, and churches.

Biden must unequivocally condemn these attacks

With the left seemingly indifferent or just unwilling to condemn these acts, only time will tell if these acts will continue in the face of the Supreme Courts’ ultimate decision on Roe v. Wade.